Kemerovo Oblast (Russian: Ке́меровская о́бласть, Kemerovskaya oblast), also known as Kuzbass (Кузба́сс) after the Kuznetsk Basin, is a federal subject of Russia (an oblast), located in southwestern Siberia, where the West Siberian Plain meets the South Siberian mountains. The oblast, which covers an area of 95,500 square kilometers (36,900 sq mi),[7] shares a border with Tomsk Oblast in the north, Krasnoyarsk Krai and the Republic of Khakassia in the east, the Altai Republic in the south, and with Novosibirsk Oblast and Altai Krai in the west. Kemerovo is the administrative center of the oblast, though Novokuznetsk is the largest city in the oblast, in terms of size. Kemerovo Oblast is one of Russia's most urbanized regions, with over 70% of the population living in its nine principal cities. Its ethnic composition is predominantly Russian, but Ukrainians, Tatars, and Chuvash also live in the oblast. The population recorded during the 2010 Census was 2,763,135.[8]

The oblast was established on January 26, 1943,[4] but it has considerably older antecedents. Shors, Teleuts and Siberian Tatars are native peoples of the region. The oldest city in Kemerovo Oblast is Novokuznetsk, founded in 1618, soon after Cossack ataman Yermak's push into Siberia.

The territory of modern Kemerovo Oblast has been inhabited for several thousand years. In 1618, Kuznetsk fort was established in the south of the future oblast to protect the land from Russian and Mongolian Dzhungarian invaders. During the 19th century, the territory of the modern oblast was a part of Tomsk Governorate.

After the October Revolution Kuzbass becomes part of the West Siberian Krai, and then the Novosibirsk Oblast. Post revolutionary period was characterized by the transition to a planned economy, the creation of the Ural-Kuzbass industrial complex development of the coal, metallurgical and chemical industries Kuzbass Kemerovo Coke built, Kuznetsk Metallurgical Combine, a lot of new mines. Industrial enterprises are being built near the workers' settlements, which quickly became a city: Kiselevsk Osinniki Krasnobrodsky, Tashtagol Kaltan Mezhdurechensk and others.

During the Great Patriotic War, Kemerovo region became a major supplier of coal and metal. From Novokuznetsk steel produced over 50,000 tanks and 45,000 aircraft. In Kuzbass from the occupied areas were evacuated equipment 71 enterprises, most of which have remained in the Kuzbass.

In January 26, 1943, the Presidium of the USSR Supreme Soviet issued a decree, decided to allocate from the Novosibirsk Oblast of Kuzbass and the establishment on its territory of Kemerovo region with administrative center in the city of Kemerovo. In the new Oblast included 17.5% of the Novosibirsk region, 9 of the 12 cities of regional subordination, 17 of the 20 workers' settlements, 23 of the 75 districts. The population of the Kemerovo Oblast was 42% of the total population of the Novosibirsk Oblast.

Kemerovo Oblast is one of Russia's most important industrial regions, with some of the world's largest deposits of coal. The south of the region is dominated by metallurgy and the mining industry, as well as mechanical engineering and chemical production. The Evraz Group and an ore subsidiary Evrazruda operate iron ore mining and processing facilities along with the Raspadskaya, Yuzhkuzbassugol, the Siberian holding company SIBPLAZ, coal and coking coal mines there. The northern area of the region is more agricultural. The region has a dense railway network, including the Trans-Siberian Railway, which passes through the oblast. Prokopevsk, Kiselevsk, and Andzhero-Sudzhensk are coal-producing centers, and Novokuznetsk is the center of the engineering industry. 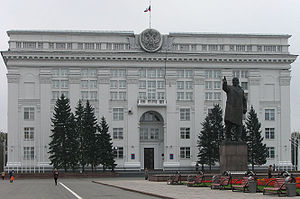 Building of the Oblast Government

During the Soviet period, the high authority in the oblast was shared between three persons: The first secretary of the Kemerovo CPSU Committee (who in reality had the biggest authority), the chairman of the oblast Soviet (legislative power), and the Chairman of the oblast Executive Committee (executive power). Since 1991, CPSU lost all the power, and the head of the Oblast administration, and eventually the governor was appointed/elected alongside elected regional parliament.

The Charter of Kemerovo Oblast is the fundamental law of the region. The Legislative Assembly of Kemerovo Oblast is the province's standing legislative (representative) body. The Legislative Assembly exercises its authority by passing laws, resolutions, and other legal acts and by supervising the implementation and observance of the laws and other legal acts passed by it. The highest executive body is the Oblast Government, which includes territorial executive bodies such as district administrations, committees, and commissions that facilitate development and run the day to day matters of the province. The Oblast administration supports the activities of the Governor who is the highest official and acts as guarantor of the observance of the oblast Charter in accordance with the Constitution of Russia.

As of a 2012 official survey[19] 34.1% of the population of Kemerovo Oblast adheres to the Russian Orthodox Church, 7% declares to be nondenominational Christian (excluding the Protestant churches), 3% are members of Rodnovery, the Slavic folk religion, 1% are either believers of Orthodox Christianity not belonging to any church or members of other (non-Russian) Orthodox churches, 1% are Muslims, 5.9% are followers of other religion or people who did not give an answer to the survey. In addition, 31% of the population declares to be "spiritual but not religious" and 17% to be atheist.[19]