The Kenya Air Force (KAF) is the national aerial warfare service branch of the Republic of Kenya.

The main airbase operating fighters is Laikipia Air Base in Nanyuki, while Moi Air Base in Eastleigh, Nairobi is the headquarters. Other bases include Forward Operating BAse (FOB) Mombasa (Moi International Airport), FOB Mandera, FOB Wajir & FOB Nyeri (mainly helicopters/small planes). The air force does not own attack helicopters: all of Kenya's fleet of armed helicopters are operated by the Army's 50th Air Cavalry Battalion.

The Kenya Air Force was formed on 1 June 1964, soon after independence, with the assistance of the United Kingdom.

Former aircraft in service included de Havilland Canada Chipmunks and Beavers (since 1974), six Hawker Hunters (bought from RAF, in operation from 1974–79), six BAC Strikemaster fighters (in operation from 1971, and 12 BAE Systems Hawks delivered in 1980. All these types have now been withdrawn.

From 1979–1982 President Daniel arap Moi used Northrop F-5 fighter jets to escort his flights in and out of the country; later commentators have pointed out that there was no threat justifying the waste of fuel and the difficult and complex requirements of the escort mission.[1]

After a failed coup by a group of Air Force officers on 1 August 1982, the Air Force was disbanded. Air Force activity was reconstituted and placed under tighter army control as the 82 Air Force. The Air Force regained its independent status in 1994.

On 10 April 2006 a KAF Harbin Y-12 crashed near Marsabit with 17 on board, of whom 14 died. It was carrying several local and national politicians; Bonaya Godana, a former minister, was among the casualties. The pilot in command was Major David Njoroge.

Since 1978, the F-5 has been the KAF's main air defense fighter. A total of 29 were delivered; 12 F-5E & 2 F-5F from USA, and 10 F-5E,3 F-5EM & 2 F-5F formerly in service with the Royal Jordanian Air Force (RJAF). The ex RJAF aircraft were upgraded to F-5EM standard before being delivered to the Kenya Air Force. There was controversy over the purchase of the F-5s from Jordan, which were shipped to Kenya and assembled locally.[2] Currently a F-5 upgrade and procurement program is underway (10 F-5E, 2 F-5F, and 3 F-5EM from Jordan.[3]). 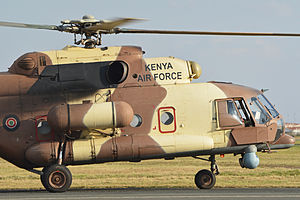 The following officers have been in command of the Kenya Air Force:[6]