Kenyon College is a private liberal arts college in Gambier, Ohio, United States, founded in 1824 by Philander Chase.[5] It is the oldest private college in Ohio and is affiliated with the Episcopal Church.[5] The campus is noted for its Collegiate Gothic architecture and rural setting.[6][7] Kenyon College is accredited by The Higher Learning Commission of the North Central Association of Colleges and Schools.[8] The acceptance rate for the Class of 2019 was 23.8%, the most selective year to date.[9] 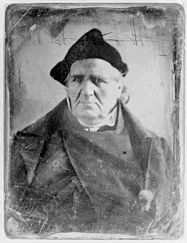 Philander Chase was the founder and first president of Bexley Hall and Kenyon College, and later became Presiding Bishop of The Episcopal Church

After becoming the first Episcopal Bishop of Ohio in 1818, Philander Chase found a severe lack of trained clergy on the Ohio frontier. He planned to create a seminary to rectify this problem, but could find little support. Undeterred, he sailed to England and solicited donations from Lord Kenyon, Lord Gambier, and the writer and philanthropist Hannah More, and the College was incorporated in December, 1824. Dissatisfied with the original location of the College in Worthington, Chase purchased eight thousand acres (32 km²) of land in Knox County (with the Mount Vernon lawyer Henry Curtis), and reached what he would name Gambier Hill on July 24, 1825. There is a legend that Bishop Chase exclaimed, "Well, this will do" upon reaching the crest of the hill.[10][11]

Kenyon's English department gained national recognition with the arrival of the poet and critic John Crowe Ransom in 1937 as Professor of Poetry and first editor of The Kenyon Review, a literary journal.

Kenyon offers concentrations, which are interdisciplinary minors. They are: African and African-American Studies, Asian Studies, Environmental Studies, Integrated Program in Humane Studies, Islamic Civilizations and Cultures, Law and Society, Neuroscience, Public Policy, and Scientific Computing. Kenyon also offers opportunities for synoptic majors based on a process of academic approval by the College administration.

The Gund Gallery, a 31,000 square foot visual arts center and exhibition space, was founded in 2011. It hosts lectures, public programming and temporary exhibitions that are free and open to both the campus community and the wider public.[12]

Kenyon is also home to the Beta of Ohio Chapter of the Phi Beta Kappa Society.

Kenyon's sports teams, which compete in the North Coast Athletic Conference (NCAC), are referred to as the Lords and Ladies, and their colors are purple, white, and black with gold often added as an accent.

The college's men's swimming team is notable in NCAA Division III, for winning, from 1980 through 2010—an NCAA record 31 consecutive national championships—and then again from 2012 through 2015. The women's swimming team is also considered among the best, winning 23 titles of its own (not consecutively) since 1984. Former Swim Coach Jim Steen has coached the most conference titles in any sport in NCAA history. During the 1980s and 90s, Diving Coach Fletcher Gilders led his athletes to fourteen consecutive North Coast Athletic Conference championships and eight individual NCAA Division III titles; Gilders would also earn NCAA D3 Coach of the Year honors on three separate occasions. In 2013, under Head Coach Jess Book, the men's team won the national title and the women's team took second. Book was voted the 2013 NCAA Men’s Coach of the Year and the 2013 NCAA Women’s Coach of the Year, and Head Diving Coach Andy Scott was voted the 2013 NCAA Division III Women's Diving Coach of the Year.

In the 2016 U.S. News & World Report rankings, Kenyon is the No. 25 liberal arts college in the United States.[14] Forbes magazine ranked Kenyon 42nd overall, and 5th in the Midwest, out of the 650 colleges and universities on its list of America's Best Colleges 2014.[15] In 2006 Newsweek selected Kenyon College as one of twenty-five "New Ivies" on the basis of admissions statistics as well as interviews with administrators, students, faculty and alumni.[16] It was also listed in Greene's list of Hidden Ivies in 2000.

Kenyon's campus also garners acclaim for its beauty; for example, it ranked 2nd on The Best College's "50 Most Amazing College Campuses for 2014".[17] 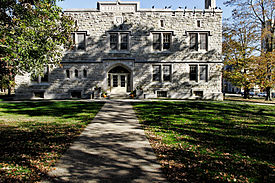 As Ohio's oldest private college, Kenyon has upheld some traditions for more than 180 years. All students in each entering class are expected to take the Matriculation Oath and sign a Matriculation Book that dates back at least a century.

Whenever a new president begins a term at the college, candles are lit in every window of Old Kenyon, as a sign of welcome. Kenyon has had twenty-five presidents; former president S. Georgia Nugent was Kenyon's first female president, and current president Sean Decatur is Kenyon's first African-American president.[19] 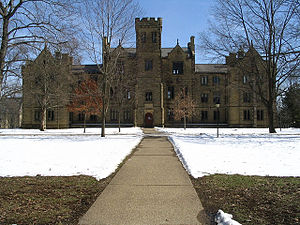 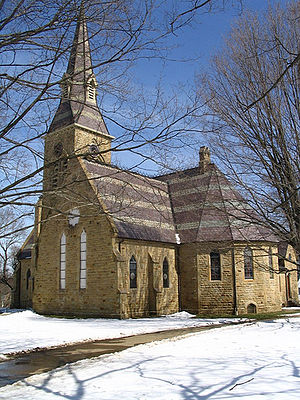 The Church of the Holy Spirit

Kenyon College attracted national attention after the 2004 presidential election during which, because of a shortage of voting machines and possibly a large number of new voter registrations,[22] some students remained in line for as long as 13 hours to place their votes.[23] The incident received attention in mainstream national news outlets such as The New York Times.[24][25]

In spring 2006, John Kerry delivered the commencement address at Kenyon College, stating that he was "honored" by the students who waited in line during the election.[26] During the 2008 presidential election campaign, the events at Kenyon in the 2004 election were remembered and recounted in discussions of voting policy[27] and predictions of the outcome of the 2008 race.[28]

Kenyon College has undertaken a number of sustainability initiatives, including a recycling system upgrade, a biodiesel project, a computer lab conversion to double-sided printing, the distribution of green living guides, as well as the creation of a dining hall composting system that diverts 6,000 pounds of waste from the landfill per week. Students partnered with administrators and/or professors to complete a campus energy audit for the past three years, as well as a carbon footprint calculation. Kenyon Green Alumni was founded to connect graduates "with a professional interest in the environment." The college recently received a "C" grade on the 2010 College Sustainability Report Card, compiled by the Sustainable Endowments Institute.[29]

Ivy, which once covered some buildings on the Kenyon campus, but damages stonework, has been eradicated.[30]

US President Rutherford B. Hayes, class of 1842

Notable alumni of Kenyon College include: