The idea of this bridge was first conceived by Albert Speer in early 1943. He hoped that the bridge would help spearhead the German invasion of the North Caucasus. From January to October 1943 the retreat of the German Caucasus Army/Army Group A, took place across the Strait of Kerch. To support the retreat the German Organisation Todt (OT) had built a ropeway across the Kerch Strait with a daily capacity of 1,000 tons. On 7 March 1943 Hitler ordered the construction of a combined Road and Railway bridge over the Strait of Kerch within 6 months. In April 1943, the OT had started with the construction of a combined iron road and railway war-bridge across the strait of Kerch. On 1 September 1943 concentrated Soviet attacks began on the remnants of the bridge head, so that the German retreat was accelerated. At this time the new bridge was not yet completed (only one third was completed). As part of the German retreat, the Wehrmacht blasted the already completed parts of the bridge.

The 4.5-kilometre (2.8 mi) bridge was actually built in the summer of 1944 after the liberation of the Crimea by the Red Army from the materials left on the site by the Wehrmacht. It was destroyed within six months by flowing ice, due to the absence of groynes.

Since 1944, various bridge projects to span the strait have been proposed or attempted. The idea of a Kerch Strait bridge resurfaced after the collapse of the Soviet Union, but in 1994 the Russian and Ukrainian sides failed to finalize the project.[1]

Since the mid 1960s the Kerch hydrounit project («Керченский гидроузел») developed here. It was a system of dams and bridges across the strait. The project was not implemented in connection with the collapse of the USSR.[2][3]

On 25 April 2010, Ukrainian President Viktor Yanukovych and Russian President Dmitry Medvedev signed an agreement to build a bridge across the Kerch Strait.[4] Russia and Ukraine signed a memorandum of mutual understanding on the construction of the bridge on 26 November 2010.[5]

Former Moscow mayor Yuri Luzhkov was a vocal advocate for a highway bridge across the strait, expressing hope that it would bring the Crimeans closer to Russia, both economically and symbolically.[1]

The rejection of the Ukraine–European Union Association Agreement in November 2013 led to increased interest in the construction of a bridge between Crimea and the Taman Peninsula of Russia.[6] In late January 2014, the Ukrainian and Russian governments decided that a new joint Ukrainian-Russian company would be commissioned to handle the construction of the bridge, while the Russian state enterprise Russian Highways (Avtodor) would become responsible for the bridge in the long term.[6] Additionally, it was decided a special working group would determine the location and set the technical parameters.[6] Construction was estimated by the Ministry of Economic Development and Trade of Ukraine to take 5 years with a cost between $1.5 and $3 billion.[6] In early February 2014, Russian Highways (Avtodor) was instructed by the First Deputy Prime Minister of Russia to work on a feasibility study to be published in 2015.[6][7]

Following the outbreak of the 2014 Crimean crisis the Prime Minister of Russia, Dmitry Medvedev, signed a governmental decree on 3 March 2014 to create a subsidiary of Russian Highways (Avtodor) to build a bridge along the Kerch Strait.[7][8] The precise location, or intended timeline have not been publicly discussed.

The annexation of Crimea by Russia in March 2014 amid deteriorating situation in Ukraine spurred further interest in construction of a bridge. A bridge over the Kerch strait would provide a land route from mainland Russia to the Crimean peninsula that bypasses Ukrainian-controlled territory.

Russian state media reported that the day after the accession agreement between Crimea and Russia was signed, Russian President Vladimir Putin said the bridge project would be accelerated. In president Putin's vision, the bridge would provide both road and rail links between Crimea and Krasnodar Krai.[9][10][11]

On 1 October 2014, the Ukrainian government publicly announced its withdrawal from the bilateral Kerch Bridge agreement, after having given Russia six months' notice of its intentions through diplomatic channels.[12]

In January 2015, the contract for the construction of the bridge was awarded to the SGM Group, whose owner Arkady Rotenberg is reportedly a close personal friend of Putin and was internationally sanctioned in response to the alleged Russian military involvement in Ukraine. SGM typically constructs pipelines and has no experience building bridges, according to the BBC News.[13] 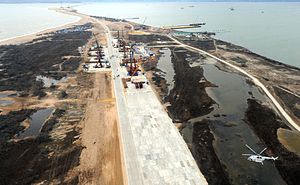 Construction of the Crimean bridge (March 2016)

Construction on the bridge began in May 2015. The project is estimated to cost 228 billion rubles (4.36 billion USD). [14] The project will include construction of a 2-lane railroad and a 4-lane highway along with the bridge. The bridge is scheduled to be opened by December 2018 for testing and to be fully operational by June 2019.[15] Three temporary bridges will be built by 2016, to facilitate access (independent of weather and currents) for main construction.[16] As of October 2015, the first of the temporary bridges has been constructed, connecting Tuzla Island and Taman peninsula.[17] Approximately 200 bombs from the World War II era were found in the area during pre-construction clearance.[18] On 19 February 2016, project of the bridge was officially approved by the Russian state expertise commission.[19]

Design of the planned bridge

The Russian government's draft resolution of 1 September 2014 requires the bridge to have 4 lanes of vehicle traffic and 2 railway lines.[20] It would probably need to be 4.5 kilometres (2.8 mi) long, and 60 metres (200 ft) high. It will be built along the so-called southern route, utilizing the Tuzla Spit, so that the multi-year construction project does not interfere with ferry operations in the northern end of the strait.[21] The final design has not been selected, however it may be a steel Lattice truss bridge: either a 2-deck bridge with vehicles on the upper deck and trains running beneath, or, parallel trusses with trains on one side, vehicles on the other side. A truss bridge will require dozens of pilings, which will impact the current flowing underneath, and the (relatively narrow) deep water channel would present a challenge to shipping. A suspension bridge with a high clearance would be better for shipping, but would present a major construction challenge.[22]

A Russia Today (RT) news video dated 2 October 2015 contains a 2-minute 38 second "computer graphic" of the bridge design, annotated with various measurements. It shows a 4-lane, flat deck highway bridge running parallel with the separate 2-track railroad. The main span over the Kerch Strait shipping channel will have a steel arch support, 227 meters wide with a 35-meter clearance above the water to allow for ships to pass under. There will be 3 segments: from the Taman Peninsula to Tuzla Spit is 7 km; across Tuzla Island is 6.5 km; and from Tuzla Island to the Crimean Peninsula is 5.5 km (19 km total).[23]