Kermit the Frog is Jim Henson's most famous Muppet creation,[4] first introduced in 1955. He is the straight man protagonist of many Muppet projects, most notably on Sesame Street, and The Muppet Show, as well as in movies, specials, and public service announcements throughout the years. Henson originally performed Kermit until his death on May 16, 1990; Steve Whitmire has performed Kermit since that time. He was voiced by Frank Welker in Muppet Babies and occasionally in other animation projects.

Kermit performed the hit singles "Bein' Green" in 1970 and "The Rainbow Connection" in 1979 for The Muppet Movie, the first feature-length film featuring Henson's Muppets. The latter song reached No. 25 on the Billboard Hot 100. Kermit's iconic look and voice have been recognizable worldwide since, and in 2006, the character was credited as the author of Before You Leap: A Frog's Eye View of Life's Greatest Lessons, which is an "autobiography" told from the perspective of the character himself.

The earliest trace of Kermit first appeared in 1955 on WRC-TV's Sam and Friends. This prototype Kermit was created from a discarded spring coat belonging to Henson's mother and two ping pong ball halves for eyes.[5]

Initially, Kermit was a lizard-like creature. He subsequently made a number of television appearances before his status as a frog was established, which was shortly before Sesame Street began. His collar was added at the time to make him seem more froglike and to conceal the seam between his head and body.[6]

The origin of Kermit's name is a subject of some debate. It is often claimed that Kermit was named after Henson's childhood friend Kermit Scott, from Leland, Mississippi.[7][8] However, Karen Falk, head archivist and board of directors member for the Jim Henson Legacy organization, denies this claim on the Jim Henson Company's website:

While Jim Henson did have a childhood acquaintance named Kermit, it was not an uncommon name at the time, and Jim always said that the Frog was NOT named after this child from his elementary school.[9]

Joy DiMenna, the only daughter of Kermit Kalman Cohen who worked as sound engineer at WBAL-TV during Jim Henson's time with Sam and Friends, recalls it differently. According to Kermit Cohen's obituary, as well as Ms. DiMenna & Lenny Levin, a colleague of Mr. Cohen at WBAL:

The late puppeteer had been the host of a show, "Sam and Friends," at WRC-TV in Washington when he was invited to tour WBAL's studios. Both were NBC affiliates then, and WBAL carried the show, Mr. Levin said.

Mr. Henson was introduced to members of the sound and camera crew, including Mr. Cohen.

"When he heard his name, Jim turned around, snapped his fingers and said to his wife, 'That's what we call the frog – Kermit.'[10]

Another common version is that Kermit was named for Kermit Love, who worked with Henson in designing and constructing Muppets, particularly on Sesame Street. But Love's association with Henson did not begin until well after Kermit's creation and naming, and he always denied any connection between his name and that of the character.[11]

As Sesame Street is localized for some different markets that speak languages other than English, Kermit is often renamed. In Portugal, he is called Cocas, o Sapo (sapo means "toad"), and in Brazil, his name is similar: Caco, o Sapo. In most of Hispanic America, his name is la rana René (René the Frog). In Spain, he is named Gustavo. In the Arabic Middle Eastern version, he is known as Kamel, which is a common Arabic male name that means "perfect". In Hungary, he is called Breki (onomatopoetic). In Turkey, although he is known as Kermit on The Muppet Show, in Sesame Street episodes, he was called Kurbağacık ("little frog"). With the release of The Muppets in 2011, most of the aforementioned countries have begun using "Kermit" as the character's name.[citation needed]

Kermit the Frog was born in Leland, Mississippi alongside approximately 2,353 siblings.[1] According to the 2002 film Kermit's Swamp Years, at the age of 12, he was the first of his siblings to leave the swamp, and one of the first frogs to talk to humans. He is portrayed as encountering a 12-year-old Jim Henson (played by Christian Kriebel) for the first time.

According to The Muppet Movie Kermit returned to the swamp, where a passing agent (Dom DeLuise) noted he had talent and, thus inspired, he headed to Hollywood, encountering the rest of the Muppets along the way. Together, they were given a standard "rich and famous" contract by Lew Lord (Orson Welles) of Wide World Studios and began their showbiz careers. In Before You Leap, Kermit again references encountering Jim Henson sometime after the events depicted in the course of The Muppet Movie and details their friendship and their partnership in the entertainment industry, and credits Henson as being the individual to whom he owes his fame. At some point after the events of The Muppet Movie, Kermit and the other Muppets begin The Muppet Show, and the characters remain together as a group, before starring in the other Muppet films and Muppets Tonight, with Kermit usually at the core of the stories as the lead protagonist. The Muppet Movie says that the events of the movie are "approximate to how it happened" (referring to how the Muppets got started) when asked about the film by his nephew Robin.

The character regards Fozzie Bear as his best friend—a fact reiterated by Kermit in Before You Leap—and the two were frequently seen together during sketches on The Muppet Show and in other Muppet-related media and merchandise.

During a 2011 interview on The Ellen DeGeneres Show, Kermit revealed that he was from the swamps of Louisiana.[12]

On August 4, 2015, Kermit the Frog and Miss Piggy announced that they had ended their romantic relationship.[13][14] On September 2, 2015, it was announced he had found a new girlfriend, a pig named Denise.[15]

Jim Henson originated the character in 1955 on his local television series, Sam and Friends. He continued to perform the character until his death in 1990. Henson's last known performance as Kermit was for an appearance on The Arsenio Hall Show to promote The Muppets at Walt Disney World. Henson died twelve days after that appearance.

Following Henson's death, veteran Muppet performer Steve Whitmire was named Kermit's new performer. His first public performance as Kermit was at the end of the television special The Muppets Celebrate Jim Henson. He has remained Kermit's principal performer since then.

Muppet performer Artie Esposito briefly performed Kermit in 2009 for a few personal appearances (an appearance on America's Got Talent, an appearance at the MTV Video Music Awards, and at the 2009 D23 Expo with Rowlf the Dog as part of a tribute to Jim Henson).

Kermit was one of the original main Muppet characters on Sesame Street. After the first season, he was intended to be removed from the cast, though he appeared in at least one new segment in the second season. He returned as a full-time character in the third. Following the death of Jim Henson, Kermit on Sesame Street was mostly limited to old sketches, although he later appeared in some new segments and specials for a few years.

Closely identified with the show, Kermit usually appeared as a lecturer on simple topics, a straight man to another Muppet (usually Grover, Herry Monster or Cookie Monster), or a news reporter interviewing storybook characters for Sesame Street News. He sang many songs on the show and appeared in the 1998 video The Best of Kermit on Sesame Street.[16]

Unlike the rest of the show's Muppets, Kermit was never any property of Sesame Workshop and has rarely been a part of the show's merchandise. When Sesame Workshop bought full ownership of its characters from The Jim Henson Company for $180 million, Kermit was not included in the deal. This character now belongs to The Muppets Studio, owned and controlled by the Walt Disney Company, although Sesame Workshop does have permission to use old sketches featuring Kermit. His first new Sesame Street appearance since 2001 was in the show's 40th season premiere on November 10, 2009.

In The Muppet Show television series, Kermit was the central character, the showrunner and the long-suffering stage manager of the theatre show, trying to keep order amidst the chaos created by the other Muppets. Jim Henson once claimed that Kermit's job on the Muppet Show was much like his own: "trying to get a bunch of crazies to actually get the job done." It was on this show that the running gag of Kermit being pursued by leading lady Miss Piggy developed.

On Muppets Tonight, Kermit was still a main character, although he was the producer rather than frontman. He appeared in many parody sketches such as NYPD Green, City Schtickers, Flippers, and The Muppet Odd Squad, as well as in the Psychiatrist's Office sketch.

Kermit also served as the mascot for The Jim Henson Company, until the sale of the Muppet characters to the Walt Disney Company.[17] A Kermit puppet can be seen at the National Museum of American History.[18]

Kermit appears in Muppet*Vision 3D, an attraction found at Disney's Hollywood Studios at Walt Disney World in Lake Buena Vista, Florida, and at Disney California Adventure Park, at the Disneyland Resort in Anaheim, California. The attractions opened in 1991 and 2001, respectively. He also appeared in two parades; Disney Stars and Motor Cars Parade held at Disney's Hollywood Studios until 2008 and Disney's Honorary VoluntEars Cavalcade that was held during 2010 at the Magic Kingdom and Disneyland.

Kermit has made numerous guest appearances on popular television shows, including co-hosting individual episodes of a number of long-running talk shows: On April 2, 1979, Kermit guest-hosted The Tonight Show Starring Johnny Carson, and as an April Fool's joke, Kermit hosted CNN's Larry King Live in 1994 and interviewed Hulk Hogan.[19] Kermit was also a semi-regular during the last two seasons of the Tom Bergeron-hosted Hollywood Squares, continuing a quasi-tradition of Muppets appearing on the game show (Big Bird and Oscar the Grouch made several appearances on the original Squares).

Kermit the Frog has appeared in almost every Muppet production, as well as making guest appearances in other shows and movies. To see a complete list, look at The Muppets filmography.

Below is a list of his more well-known appearances: 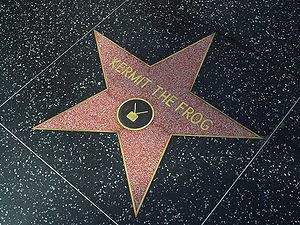 Kermit's star on the Hollywood Walk of Fame

Kermit was awarded an honorary doctorate of Amphibious Letters on May 19, 1996 at Southampton College, New York, where he also gave a commencement speech.[21] He is also the only amphibian to have had the honor of addressing the Oxford Union.[22] A statue of Henson and Kermit was erected on the campus of Henson's alma mater, the University of Maryland, College Park in 2003.

Kermit was also given the honor of being the Grand Marshal of the Tournament of Roses Parade in 1996. The Macy's Thanksgiving Day Parade has featured a Kermit balloon since 1977.[23]

On Kermit's 50th birthday, the United States Postal Service released a set of new stamps with photos of Kermit and some of his fellow Muppets on them. The background of the stamp sheet features a photo of a silhouetted Henson sitting in a window well, with Kermit sitting in his lap looking at him.

In 2006, while Kermit was on his international tour, Kermit, Texas was taken over by the frog during their homecoming week, ending with Kermit himself crowning the homecoming queen. The city of Kermit's main water tower was then painted with the face and signature of the frog. The voice actor used for Kermit at this time was Tanner Martin (13) of Frackville Pennsylvania. He was selected for the contest, which had over 100,000 entries.

Kermit was also the grand marshal for Michigan State University's homecoming parade in 2006.[25]

Kermit's legacy is also deeply entrenched in the science community. One of the famous WP-3D research platforms flown by the NOAA Hurricane Hunters is named after Kermit. The other is named after Miss Piggy.