From Infogalactic: the planetary knowledge core
Jump to: navigation, search
For other uses, see Khabarovsk (disambiguation).

Native villages near the site of the future Khabarovsk according to an English map of 1773. The village closest to today's Khabarovsk is labeled Hitcha. Maack's "Cape Kyrma" site (thought by B.P. Polyakov to be the site of Stepanov's Kosogorsky Ostrog) is Heremo 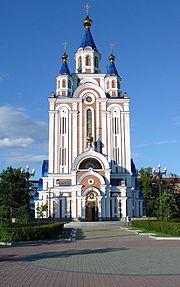 Earliest history of the region

The lands near the confluence of the Ussuri and the Amur Rivers, where today's Khabarovsk stands, have been populated for many centuries by Tungusic people, probably related to the Jurchens of the past and/or the Nanais of the present day. Chinese expeditions reached this area as early as the first half of the 15th century, when the fleets of the Ming eunuch Yishiha sailed several times from Jilin City all the way to Tyr on the lower Amur.

In the mid-17th century, the Amur Valley became the scene of hostilities between the Russian Cossacks, trying to expand into the region and to collect tribute from the natives, and the rising Manchu Qing Dynasty, intent on securing the region for itself.

The Russian explorers and raiders of the 1650s set up a number of more or less fortified camps (ostrogs) on the Amur; most of them were in use for only a few months, and later destroyed. It is usually thought that the first such camp in the general area of today's Khabarovsk was the fortified winter camp named Achansk (Ачанск) or Achansky gorodok (Ачанский городок), built by the Cossacks of Yerofey Khabarov in September 1651 after they had sailed to the area from the upper Amur. The fort was named after the local tribe whom Khabarov's people called "Achans".[14][15] Already on October 8 the fort was unsuccessfully attacked by joint forces of Achans and Duchers (who had good reasons to hate the Cossacks, due to their rather heavy-handed tribute-extraction tactics[16]), while many Russians were away fishing.[15] In late November, Khabarov's people undertook a three-day campaign against the local chief Zhakshur (Жакшур) (whose name is also known in a more Russian version, Zaksor (Заксор)), collecting a large amount of tribute and announcing that the locals were now subjects of the Russian Czar. Similar campaign was waged later in winter against the Ducher chief Nechiga (Нечига), farther away from Achansk.[15]

On March 24 (or 26), 1652, Fort Achansk was attacked by Manchu cavalry, led by Ninguta's commander Haise, reinforced by Ducher auxiliaries, but the Cossacks stood their ground in a day-long battle and even managed to seize the attackers' supply train.[15] Once the ice on the Amur broke in the spring of 1652, Khabarov's people destroyed their fort and sailed away.[15]

The exact location of Khabarov's Achansk has long been a subject for the debate among Russian historians and geographers.[16][17] A number of locations, both upstream and downstream of today's Khabarovsk, have been proposed since Richard Maack, one of the first Russian scholars to visit the region, identified Achansk in 1859 with the ruins on Cape Kyrma, which is located on the southern (Chinese) shore of the Amur, upstream of Khabarovsk.[16] The most widely accepted point of view is probably that of B.P. Polevoy, who believed that Khabarov's Achansk was located in the Nanai village later known as Odzhal-Bolon (Russian: Оджал-Болонь), located on the left bank of the Amur, closer to Amursk than to Khabarovsk. One of his arguments was that both Khabarov's Achan (sometimes also spelled by the explorer as Otshchan, Отщан), and Wuzhala (乌扎拉) of the Chinese records of the 1652 engagement are based on the name of the Nanai clan "Odzhal" (Оджал), corresponding to the 20th-century name of the village as well. (The name of the clan was also written as "Uzala", as in the name of its best known member, Dersu Uzala).[16]

B.P. Polevoy's view appeared to gain wide support among the Russian geographer community; petitioned by the Amur Branch of the Russian Geographical Society, the Russian Government renamed the village of Odzhal to Achan in 1977, to celebrate its connection with Khabarov's raid.[16]

As to the Cape Kyrma ruins, thought by Maack to be the remains of Achansk, B.P. Polevoy identified them as the remains of another ostrog - namely, Kosogorsky Ostrog, where Onufriy Stepanov stayed a few years later.[17]

After the Treaty of Nerchinsk (1689), the area became an uncontested part of the Qing Empire for the next century and a half. Modern historical maps of the Qing period published in China mark the site of future Khabarovsk as Boli (Chinese: 伯力). All of the middle and lower Amur region was nominally part of the Jilin Province, run first out of Ninguta and later out of Jilin City.

French Jesuits who sailed along the Ussury and the Amur in 1709 prepared the first more or less precise map of the region. According to them, the indigenous Nanai people were living on the Ussury and on the Amur down to the mouth of the Dondon River (i.e., in the region including the site of the future Khabarovsk). These people were known to the Chinese as Yupi Dazi ("Fish skin Tartars").[18] 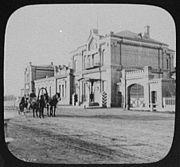 Khabarovsk - residence of the governor-general of Eastern Siberia 1895

In 1858, the area was ceded to Russia under the Treaty of Aigun. The Russians founded the military outpost of Khabarovka (Хаба́ровка),[citation needed] named after a Russian explorer Yerofey Khabarov. The post later became an important industrial center for the region. Town status was granted in 1880.[citation needed]

In 1894, a department of Russian Geographical Society was formed in Khabarovsk and began initiating the foundation of libraries, theaters, and museums in the city. Since then, Khabarovsk's cultural life has flourished. Much of the local indigenous history has been well preserved in the Regional Lore Museum and Natural History Museum and in places like near the Nanai settlement of Sikhachi-Alyan, where cliff drawings from more than 13,000 years ago can be found. The Khabarovsk Art Museum exhibits a rare collection of old Russian icons.

In 1916, Khabarovsk Bridge across the Amur was completed, allowing Trans-Siberian trains to cross the river without using ferries (or temporary rail tracks over the frozen river in winter).

After the defeat of Japan in World War II, Khabarovsk was the site of the Khabarovsk War Crime Trials, in which twelve former members of the Japanese Kwantung Army and Unit 731 were put on trial for the manufacture and use of biological weapons during World War II.

Chinese Emperor Puyi, captured by Soviet troops in Manchuria, was relocated to Khabarovsk and lived there from 1945 up to 1950, when he was returned to China.[19]

On November 5, 1956, the first phase of the city tram was commissioned. The Khabarovsk television studio began broadcasting in 1960. On 1 September 1967, the Khabarovsk Institute of Physical Education, now the Far Eastern State Academy of Physical Culture, opened. On January 14, 1971 Khabarovsk was awarded the Order of October Revolution. 1975 saw the opening of the first stage of the urban trolley. In 1976 the city hosted an international ice hockey tournament with the ball for the prize of the newspaper "Sovietskaya Rossia". In 1981 the Bandy World Championship was played in the city.

In 1996, Khabarovsk held its first mayoral elections. Paul D. Filippov, whose candidacy was supported by Governor Viktor Ishayev, was defeated. In 1998, reconstruction of the central square of Khabarovsk was completed. In May 2000, President of Russia, Vladimir Putin, decreed that new federal districts be formed, and Khabarovsk became the center of the Far Eastern Federal District.

In 2006, the Center for Cardiovascular Surgery, a high-tech medical center, was constructed according to a Russian national health project. In 2008, the train station was completely renovated, and the adjacent square was reconstructed to include fountains and an underground passage. In 2009, Khabarovsk hosted the EU-Russia summit. In 2010, the city hosted a meeting of the Great Circle of Ussuri Cossacks. On November 3, 2012, Khabarovsk was awarded the honorary title of "City of Military Glory".

Khabarovsk sites are prominently featured on the 5000 ruble banknote

The city is located along the Trans-Siberian Railway. Rail distance from Moscow is 8,523 kilometers (5,296 mi); it is a principal railway center.

There are the following institutions of higher education in Khabarovsk:[22][23]

A fountain on Lenin Square

Visitors to the picturesque city of Khabarovsk are likely to enjoy walking the broad Amursky Boulevard with its many vibrant shops and perhaps visit the local market. The city's five districts stretch for 45 kilometers (28 mi) along the Amur River.

Recently, there have been many renovations in the city's central part, rebuilding with historical perspective. A popular attraction for visitors is a walking tour from the Lenin Square to Utyos on Amur via Muravyov-Amursky Street, where visitors can find traditional Russian cuisine restaurants and shops with souvenirs. There are many night clubs and pubs in this area. In Wintertime ice sculptures are on display on the cities squares and parks. Artists come from as far as Harbin in China.

Unlike Vladivostok, the city has never been closed to foreigners, despite it being the headquarters of the Far East Military District, and retains its historically international flavour. Once the capital of the Soviet Far East (from 1926 to 1938), since the demise of the Soviet Union, it has experienced an increased Asian presence. It is estimated that over one million Chinese travel to and through Khabarovsk yearly, and foreign investment by Japanese and Korean corporations has grown in recent years. The city has a multi-story shopping mall and about a dozen hotels.

The headquarters of the Russian Eastern Military District is located at 15 Serysheva Street. There is also an air base located 3 km (1.9 mi) to the east of the city. 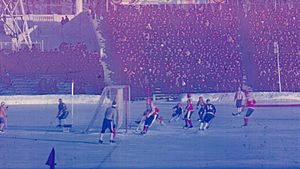 SKA Khabarovsk (which would later merge with Neftyanik to SKA-Neftyanik) in 1982, playing at home against Yenisey, national vice-champions that year

The city was a host to the 1981 Bandy World Championship. It also hosted the 2015 Bandy World Championship, which was visited by Prime Minister Dmitry Medvedev[1]. 21 teams were expected,[2] which would have been 4 more than the record-making 17 from the 2014 tournament. In the end, China was the only newcomer, while Canada and Ukraine withdrew, the latter for political reasons.

Khabarovsk is twinned with:[24]