Khanate of Bukhara (or Khanate of Bukhoro) (Persian: خانات بخارا‎‎; Uzbek: Buxoro Xonligi) was a Central Asian[4] state from the second quarter of 16th century to the late 18th century. Bukhara became the capital of the short-lived Shaybanid empire during the reign of Ubaydallah Khan (1533–1540). The khanate reached its greatest extent and influence under its penultimate Shaybanid ruler, Abdullah Khan II (r. 1577–1598).

In the 17th and 18th centuries, the Khanate was ruled by the Janid Dynasty (Astrakhanids or Ashtarkhanids). They were the last Genghisid descendants to rule Bukhara. In 1740, it was conquered by Nadir Shah, the Shah of Iran. After his death in 1747, the khanate was controlled by the non-Genghisid descendants of the Uzbek emir Khudayar Bi, through the prime ministerial position of ataliq. In 1785, his descendent, Shah Murad, formalized the family's dynastic rule (Manghit dynasty), and the khanate became the Emirate of Bukhara.[5] The Manghits were non-Genghisid and took the Islamic title of Emir instead of Khan since their legitimacy was not based on descent from Genghis Khan. 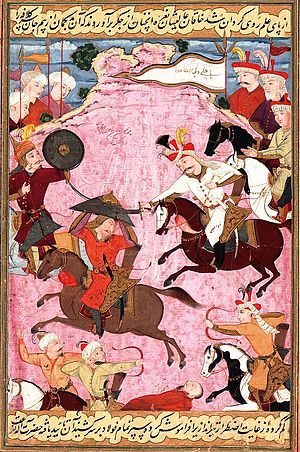 The battle between Shah Ismail I and Muhammad Shaybani.

The Shaybanid dynasty ruled the Khanate from 1500 to 1598. Under their rule, Bukhara became a center of arts and literature and educational reforms were introduced.

New books on history and geography were written in this period, such as Haft iqlīm (Seven Climates) by Amin Ahmad Razi, a native of Iran.[citation needed] Bukhara of the 16th century attracted skilled craftsman of calligraphy and miniature-paintings, such as Sultan Ah Maskhadi, Mahmud ibn Eshaq Shakibi, the theoretician in calligraphy and dervish Mahmud Buklian, Molana Mahmud Muzahheb, and Jelaleddin Yusuf.[citation needed] Among the famous poets and theologians who worked in Bukhara in that era were Mushfiki, Nizami Muamaya, and Mohammad Amin Zahed.[citation needed] Molana Abd-al Hakim was the most famous of the many physicians who practised in the Bukharan khanate in the 16th century.[citation needed]

Abd al-Aziz Khan (1540–1550) established a library "having no equal" the world over. The prominent scholar Sultan Mirak Munshi worked there from 1540. The gifted calligrapher Mir Abid Khusaini produced masterpieces of Nastaliq and Reihani script. He was a brilliant miniature-painter, master of encrustation, and was the librarian (kitabdar) of Bukhara's library.[6]

The Shaybanids instituted a number of measures to improve the khanate's system of public education. Each neighborhood mahalla — unit of local self-government — of Bukhara had a hedge school, while prosperous families provided home education to their children. Children started elementary education at the age of six. After two years they could be taken to madrasah. The course of education in madrasah consisted of three steps of seven years each. Hence, the whole course of education in madrasah lasted twenty-one years. The pupils studied theology, arithmetic, jurisprudence, logic, music, and poetry. This educational system had a positive influence upon the development and wide circulation of the Persian and Uzbek languages, and on the development of literature, science, art, and skills.[citation needed]

The Janid Dynasty (descendents of Astrakhanids) ruled the Khanate from 1599 until 1747. Yar Muhammad and his family had escaped from Astrakhan after Astrakhan fell to Russians. He had a son named Jani Muhammad who had two sons named Baqi Muhammad and Vali Muhammad from his wife, who was the daughter of the last Shaybanid ruler. 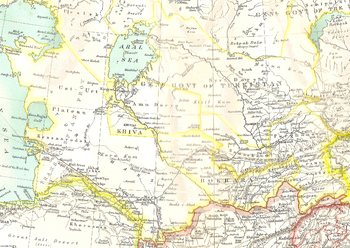 1902–1903 borders of the Imperial Russian Territories of Bukhara, Kiva, and Kokand.