The Khanate of Khiva (Persian: خانات خیوه‎‎, Uzbek: 'خیوه خانلیگی') was a Central Asian[5] state that existed in the historical region of Khwarezm from 1511 to 1920, except for a period of Persian occupation by Nadir Shah between 1740–1746. The Khans were the patrilineal descendants of Shayban (Shiban), the fifth son of Jochi and grandson of Genghis Khan. Centered in the irrigated plains of the lower Amu Darya, south of the Aral Sea, with the capital in Khiva City, the country was ruled by a turkified branch of Mongolian tribe the Khongirads, that came from Astrakhan. It covered present western Uzbekistan, southwestern Kazakhstan and much of Turkmenistan before Russian arrival at second half of 19th century.

In 1873, the Khanate of Khiva was much reduced in size and became a Russian protectorate. Following the Russian Revolution of 1917, Khiva had a revolution too, and in 1920 the Khanate was replaced by the Khorezm People’s Soviet Republic. In 1924, the area was formally incorporated into the Soviet Union and today is largely a part of Karakalpakstan and Xorazm Province in Uzbekistan.

The region that would become the Khanate of Khiva was a part of the Chagatai Khanate with its capital at Old Urgench, one of the largest and most important trading centers in Central Asia. However, Timur regarded the state as a rival to Samarkand, and over the course of 5 campaigns, he destroyed Old Urgench completely in 1388. In 1505, Uzbeks under Muhammad Shaybani captured Khwarezm from the Timurids. After Shaybani's defeat to the Safavids in 1510, Persians captured this region. But in 1511, the Uzbek group the Yadigarid Shaybanids installed themselves as khans of the region after rebellion against Persian rule. Once Old Urgench was finally abandoned due to a shift in the course of the Amu-Darya in 1576, the center of the region shifted southward, and, in 1619, the khan, Arab Muhammad I, chose Khiva as the capital of the khanate. 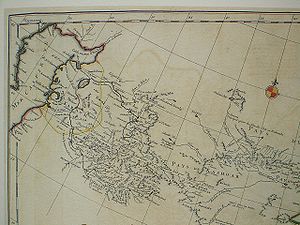 Khanate of Khiva (labeled Karasm), on a 1734 French map. The Khanate on the map surrounds the Aral Sea (depicted as much smaller than it actually was in those days) and includes much of the today's Kazakhstan's and Turkmenistan's Caspian coast

Much of Khiva's later history was framed against the khanate's relationship with the great powers Russia and Britain. The discovery of gold on the banks of the Amu Darya during the reign of Russia's Peter the Great, together with the desire of the Russian Empire to open a trade route to India, prompted an armed trade expedition to the region in 1717-18, led by Prince Alexander Bekovich-Cherkassky and consisting of 750-4,000 men. Upon receiving the men, the Khivan khan, Shir Ghazi, set up camp under the pretense of goodwill, then ambushed and slaughtered the envoys, leaving ten alive to send back. Peter the Great, indebted after wars with the Ottoman Empire and Sweden, did nothing. The khanate was a dependency of Nadir Shah's Persia between 1740-1747.

Tsar Paul I also attempted to conquer the khanate, but his expedition was woefully undermanned and undersupplied, and was recalled en route due to his assassination. Tsar Alexander I had no such ambitions, and it was under Tsars Nicholas I and Alexander II that serious efforts to annex Khiva started. 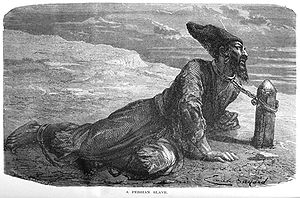 Persian slave in the Khanate of [Kiva], 19th century

A notable episode during The Great Game involved a Russian expedition to Khiva in 1839. The purpose of the mission was to free the slaves captured and sold by Turkmen raiders from the Russian frontiers on the Caspian Sea, but the expedition was also an attempt to extend Russia's borders while the British Empire entangled itself in the First Anglo-Afghan War. The expedition, led by General V.A. Perovsky, the commander of the Orenburg garrison, consisted of 5,200 infantry, and ten thousand camels. Due to poor planning and a bit of bad luck, they set off in November 1839, into one of the worst winters in memory, and were forced to turn back on 1 February 1840, arriving back into Orenburg in May, having suffered over a thousand casualties. 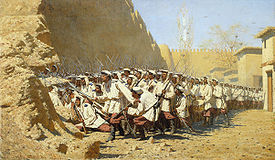 The painter Vasily Vereshchagin was present at the taking of Khiva by Russian forces in 1873.

At the same time, Britain, anxious to annex Khiva, launched its own effort to free the slaves. Major Todd, the senior British political officer stationed in Herat (in Afghanistan) dispatched Captain James Abbott, disguised as an Afghan, on Christmas Eve, 1839, for Khiva. Abbott arrived in late January 1840 and, although the khan was suspicious of his identity, he succeeded in talking the khan into allowing him to carry a letter for the Tsar regarding the slave issue. He left on 7 March 1840, for Fort Alexandrovsk (Aqtau), and was subsequently betrayed by his guide, robbed, then released when the bandits realized the origin and destination of his letter. His superiors in Herat, not knowing of his fate, sent another officer, Lieutenant Richmond Shakespear, after him. Shakespear had more success than Abbott: he convinced the khan to free all Russian subjects under his control, and also to make the ownership of Russian slaves a crime punishable by death. The freed slaves and Shakespear arrived in Fort Alexandrovsk on 15 August 1840, and Russia lost its primary motive for the conquest of Khiva, for the time being. 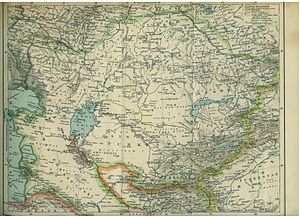 A 1903 Polish map showing Khiva (Chiwa, in Polish) within the much reduced borders the Khanate had during 1874-1920

A permanent Russian presence in Khwarezm began in 1848 with the building of Fort Aralsk at the mouth of the Syr Darya. The Empire's military superiority was such that Khiva and the other Central Asian principalities, Bukhara and Kokand, had no chance of repelling the Russian advance, despite years of fighting.[6] Khiva was gradually reduced in size by Russian expansion in Turkestan and, in 1873, after Russia conquered the neighbouring cities of Tashkent and Samarkand, General Von Kaufman launched an attack on Khiva consisting of 13,000 infantry and cavalry. The city of Khiva fell on 28 May 1873 and, on 12 August 1873, a peace treaty was signed that established Khiva as a quasi-independent Russian protectorate.

The first significant settlement of Europeans in the Khanate was a group of Mennonites who migrated to Khiva in 1882. The German-speaking Mennonites had come from the Volga region and the Molotschna colony under the leadership of Claas Epp, Jr. The Mennonites played an important role in modernizing the Khanate in the decades prior to the October Revolution by introducing photography, which resulted with the development of the Uzbek photography and filmmaking, more efficient methods for cotton harvesting, electrical generators, and other technological innovations.[7] 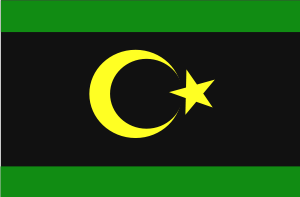 After the 1917 Bolshevik seizure of power in the October Revolution, anti-monarchists and Turkmen tribesmen joined forces with the Bolsheviks at the end of 1919 to depose the khan. On 2 February 1920, Khiva's last Kungrad khan, Sayid Abdullah, abdicated and a short-lived Khorezm People’s Soviet Republic (later the Khorezm SSR) was created out of the territory of the old Khanate of Khiva, before it was finally incorporated into the Soviet Union in 1924, with the former Khanate divided between the new Turkmen SSR and Uzbek SSR. Following the collapse of the Soviet Union in 1991, these became Turkmenistan and Uzbekistan respectively. Today, the area that was the Khanate has a mixed population of Uzbeks, Karakalpaks, Turkmens, and Kazakhs.

The borders of the Russian imperial territories of Kiva, Bukhara and Kokand in the time period of 1902–1903. 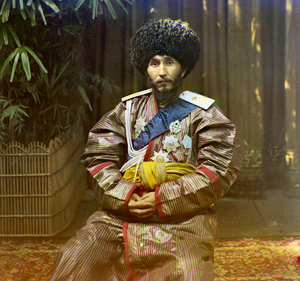