Kharkiv International Airport (Ukrainian: Міжнародний аеропорт "Харків"), (IATA: HRK, ICAO: UKHH) is an airport located in Kharkiv, Ukraine. The airport is the main airfield serving the city of Kharkiv, Ukraine's second largest city. Located to the south-east of the city centre, in the city's Kominternivskyi district.

The main terminal at Kharkiv was built in the 1950s in a socialist neo-classical style favoured by Joseph Stalin. However, with the award of Euro 2012 to Poland and Ukraine, the Kharkiv International Airport has built a new modern international terminal in order to comply with UEFA regulations. The old building was renovated to become a VIP terminal.

Since 2013 the airport operates a CATII instrument landing system (ILS). 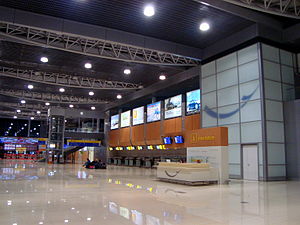 Interior of the new terminal

Kharkiv International Airport is well served by municipal transport and is connected to the city's wider network of roads and railways via Aeroflotska Street and the M03 national trunk road. The following bus lines provide public transportation between the airport and the city of Kharkiv: