The oblast is the third most populous province of Ukraine, with a population of 2,857,751 in 2004, more than half (1.5 million) of whom live in the city of Kharkiv, the oblast's administrative center. While the Russian language is primarily spoken in the cities of Kharkiv oblast, elsewhere in the oblast most inhabitants speak Ukrainian.

During the Soviet administrative reform of 1923–1929, in 1925, the Kharkov Governorate was abolished leaving its five okruhas: Okhtyrka (originally Bohodukhiv), Izyum, Kupyansk, Sumy, and Kharkiv. Introduced in the Soviet Union in 1923, a similar subdivisions existed in Ukraine back in 1918. In 1930 all okruhas were also abolished with raions becoming the first level of subdivision of Ukraine until 1932.

The modern Kharkiv oblast is a relatively recent creation, having been established on 27 February 1932. In summer of 1932 some parts of the oblast were included in the newly created Donetsk Oblast originally centered in Artemivsk (later in Stalino). In fall of the same year some territories of the Kharkiv Oblast were used in creation of Chernihiv Oblast. More territories became part of Poltava Oblast in fall of 1937 and Sumy Oblast in winter of 1939.

During the Holodomor the population of the Kharkiv Oblast together with Kiev Oblast suffered the most. The region saw major fighting during World War II in several Battles of Kharkov between 1941 and 1943.

During the 1991 referendum, 86.33% of votes in Kharkiv Oblast were in favor of the Declaration of Independence of Ukraine. A survey conducted in December 2014 by the Kyiv International Institute of Sociology found 4.2% of the oblast's population supported their region joining Russia, 71.5% did not support the idea, and the rest were undecided or did not respond.[3] A poll by Alexei Navalny also found little support for becoming part of Russia.[4]

At the 2001 census, the ethnic groups within the Kharkiv Oblast were:

the groups by native language:

The Kharkiv oblast has a primarily industrially based economy, including engineering, metallurgy, manufacturing, production of chemicals and food processing. It also has an important agricultural sector with 19,000 square kilometres of arable land (comprising 5.9% of the total arable lands of Ukraine).

Also in Kharkiv is the Airplane plant for space controlling systems. It is a major center for all branches of engineering, from large-scale manufacture to microelectronics. Also situated in Kharkiv Oblast is a gas field, which is one of the biggest in Ukraine.

The Kharkiv Oblast is administratively subdivided into 27 raions (districts), as well as 7 cities (municipalities) which are directly subordinate to the oblast government: Chuhuiv, Izium, Kupiansk, Liubotyn, Lozova, Pervomaiskyi, and the administrative center of the oblast, Kharkiv. 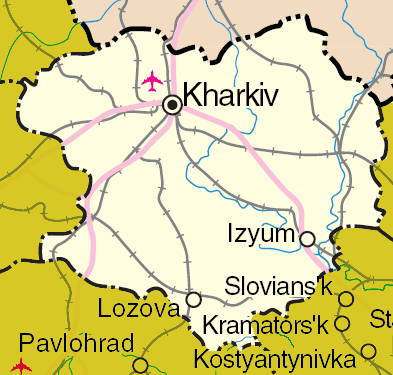 Most of Ukraine's oblasts are named after their capital cities, officially referred to as "oblast centers" (Ukrainian: обласний центр, translit. oblasnyi tsentr). The name of each oblast is a relative adjective, formed by adding a feminine suffix to the name of respective center city: Kharkiv is the center of the Kharkivs’ka oblast’ (Kharkiv Oblast). Most oblasts are also sometimes referred to in a feminine noun form, following the convention of traditional regional place names, ending with the suffix "-shchyna", as is the case with the Kharkiv Oblast, Kharkivshchyna.

It has a regional federation within Ukrainian Bandy and Rink bandy Federation.[1]