From Infogalactic: the planetary knowledge core
Jump to: navigation, search
For other uses, see Khartoum (disambiguation). 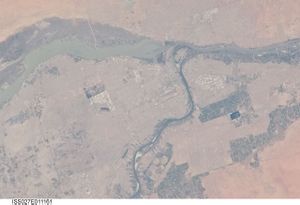 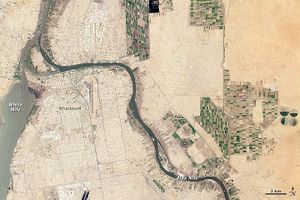 Khartoum with White and Blue Niles

Khartoum (/kɑːrˈtuːm/ kar-TOOM)[1][2][note 1] is the capital and second largest city of Sudan and Khartoum state. It is located at the confluence of the White Nile, flowing north from Lake Victoria, and the Blue Nile, flowing west from Ethiopia. The location where the two Niles meet is known as the المقرن "al-Mogran", meaning the Confluence. The main Nile continues to flow north towards Egypt and the Mediterranean Sea.

Divided by the Niles, Khartoum is a tripartite metropolis with an estimated overall population of over five million people, consisting of Khartoum proper, and linked by bridges to Khartoum North (الخرطوم_بحري al-Kharṭūm Baḥrī ) and Omdurman (أم درمان Umm Durmān ) to the west.

The origin of the word Khartoum is uncertain. One theory argues that khartoum is derived from Arabic kharṭūm خرطوم meaning 'trunk' or 'hose', probably referring to the narrow strip of land extending between the Blue and White Niles.[3] Captain J. A. Grant, who reached Khartoum in 1863 with Captain Speke's expedition, thought that the name was most probably from the Arabic قرطم qurtum, safflower (Carthamus tinctorius), which was cultivated extensively in Egypt for its oil to be used as fuel.[4] Some scholars speculate that the word derives from kiertoum in the Dinka language, which means "the junction of two rivers."[5]

Khartoum at the Bend of the Nile

Khartoum was established 24 kilometres (15 mi) north of the ancient city of Soba in 1821 by Ibrahim Pasha, the son of Egypt's ruler, Muhammad Ali Pasha, who had just incorporated Sudan into his realm. Originally, Khartoum served as an outpost for the Egyptian Army, but the settlement quickly grew into a regional centre of trade. It also became a focal point for the slave trade. Later, it became the administrative center of Sudan and official capital.

Troops loyal to the Mahdi Muhammad Ahmad began a siege of Khartoum on 13 March 1884, against defenders led by British General Charles George Gordon. The siege ended in a massacre of the Anglo-Egyptian garrison. The heavily damaged city fell to the Mahdists on 26 January 1885 and all its inhabitants were put to death.[6]

Omdurman was the scene of the bloody Battle of Omdurman on 2 September 1898, during which British forces under Herbert Kitchener defeated the Mahdist forces defending the city. 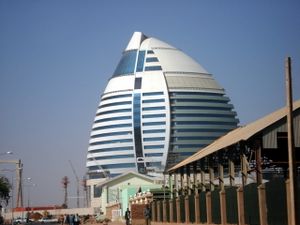 In 1973, the city was the site of an anomalous hostage crisis in which members of Black September held ten hostages at the Saudi Arabian embassy, five of whom were diplomats. The US ambassador, the US deputy ambassador, and the Belgian chargé d'affaires were murdered. The remaining hostages were released. A 1973 United States Department of State document, declassified in 2006, concluded "The Khartoum operation was planned and carried out with the full knowledge and personal approval of Yasser Arafat."[7]

The first oil pipeline between Khartoum and the Port of Sudan was completed in 1977.

Throughout the 1970s and 1980s, Khartoum was the destination for hundreds of thousands of refugees fleeing conflicts in neighboring nations such as Chad, Eritrea, Ethiopia and Uganda. Many Eritrean and Ethiopian refugees assimilated into society, while others settled in large slums at the outskirts of the city. Since the mid-1980s, large numbers of refugees from South Sudan and Darfur fleeing the violence of the Second Sudanese Civil War and Darfur conflict have settled around Khartoum.

In 1991, Osama bin Laden purchased a house in the affluent al-Riyadh neighborhood of the city and another in Soba. He lived there until 1996 when he was banished from the country. Following the 1998 U.S. embassy bombings, the United States accused bin Laden's al-Qaeda group and launched cruise missile attacks (20 August) on the al-Shifa pharmaceutical factory in northern Khartoum. The destruction of the factory produced diplomatic tension between the U.S. and Sudan. The ruins of the factory are now a tourist attraction.

After the sudden death of SPLA head and vice-president of Sudan, John Garang, at the end of July 2005, there were three days of violent riots in the capital. The riots finally died down after Southern Sudanese politicians and tribal leaders sent strong messages to the rioters. The situation could have been much more dire; even so, the death toll was at least 24, as youths from southern Sudan attacked northern Sudanese and clashed with security forces.[8]

On 10 May 2008 the Darfur rebel group of the Justice and Equality Movement moved into the city where they engaged in heavy fighting with Sudanese government forces. Their soldiers included minors and their goal was the toppling of Omar al-Bashir's government, though the Sudanese government succeeded in beating back the assault.[9][10][11]

On 23 October 2012 an explosion at the Yarmouk munitions factory killed two people and injured another person. The Sudanese government has claimed that the explosion was the result of an Israeli airstrike.[12] 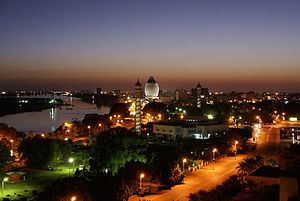 Khartoum features a hot desert climate (Köppen climate classification BWhw) with a dry season occurring during "wintertime", typical of the Saharo-Sahelian zone which marks the progressive passage between the Sahara Desert, vast arid areas and the Sahel, vast semi-arid areas. The climate is extremely arid for most of the year with about nine months where average rainfall is lower than 5 mm (0.20 in). The very long dry season is itself divided into a hot, very dry season between November and March as well as a very hot, dry season between April and June. During this part of the year, hot, dry continental trade winds from deserts sweep over the region such as the harmattan (a northerly or northeasterly wind): the sky is perfectly clear, the weather is stable, very dry and the rainfall inhibition is total. The very irregular, very brief, rainy season lasts about 1 month as the maximum rainfall is recorded in August with about 75 mm (3.0 in). The rainy season is characterized by a seasonal reverse of wind regimes, when the Intertropical Convergence Zone goes northerly. Average annual rainfall is very low, with only 162 mm (6.4 in) of precipitation. Khartoum records on average six days with 10 mm (0.39 in) or more and 19 days with 1 mm (0.039 in) or more of rainfall. The highest temperatures occur during two periods in the year: the first at the late dry season, when average high temperature consistently exceed 40 °C (104 °F) from April to June, and the second at the early dry season, when average high temperature exceed 39 °C (102 °F) in September and October months. Khartoum is one of the hottest major cities on Earth, with annual mean temperatures hovering around 30 °C (86 °F). The city has also truly hot "winters" for a such dry climate. In no month does the average monthly high temperature fall below 30 °C (86 °F). This is something not seen in other major cities with hot desert climates such as Riyadh, Baghdad and Phoenix. Temperatures cool off enough during the night, with Khartoum's lowest average low temperature of the year just above 15 °C (59 °F). Khartoum is also one of the sunniest major cities in the world, with an annual sunshine duration around 3,700 hours. 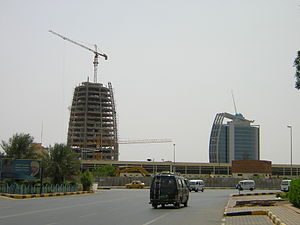 After the signing of the historic Comprehensive Peace Agreement between the government of Sudan and the Sudan People's Liberation Movement (SPLA), the Government of Sudan has begun a massive development project.[17][18] In 2007, the biggest projects in Khartoum were the Al-Mogran Development Project, two five-star hotels, a new airport, Mac Nimir Bridge (finished in October 2007) and the Tuti Bridge that links Khartoum to Tuti Island.

In the 21st century, Khartoum has developed based on Sudan's oil wealth. The center of the city has tree-lined streets. Khartoum has the highest concentration of economic activity in the country. This has changed as major economic developments take place in other parts of the country, like oil exploration in the South, the Giad Industrial Complex in Al Jazirah state and White Nile Sugar Project in Central Sudan, and the Merowe Dam in the North.[citation needed]

Among the city's industries are printing, glass manufacturing, food processing, and textiles. Petroleum products are now produced in the far north of Khartoum state, providing fuel and jobs for the city. One of Sudan's largest refineries is located in northern Khartoum.[citation needed]

The Souq Al Arabi is Khartoum's largest open air market. The "souq" is spread over several blocks in the center of Khartoum proper just south of the Great Mosque (Mesjid al-Kabir) and the minibus station. It is divided into separate sections, including one focused entirely on gold.[citation needed]

Afra Mall is located in the southern suburb Arkeweet. The Afra Mall has a supermarket, retail outlets, coffee shops, a bowling alley, movie theaters, and a children's playground.

In 2011, Sudan opened the Hotel Section and part of the food court of the new, Cornithia hotel Tower. The Mall/Shopping section is still under construction.

Khartoum is the main location for most of Sudan's top educational bodies.[citation needed]

Khartoum is home to the largest airport in Sudan, Khartoum International Airport. It is the main hub for Sudan Airways, Sudan's main carrier. The airport was built at the southern edge of the city; but with Khartoum's rapid growth and consequent urban sprawl, the airport is now located in the heart of the city. A new international airport is currently being built about 40 km (25 mi) south of the city center.There have been delays to start construction because lack of funding of the project but it's known that the airport will be completed sometime in 2017. It will replace the current airport in Khartoum as Sudan's main airport.

The following bridges cross the Blue Nile and connect Khartoum to Khartoum North:

The following bridges cross the White Nile and connect Khartoum to Omdurman:

the following bridges cross from Omdurman: to Khartoum North:

Khartoum has rail lines from Wadi Halfa, Port Sudan on the Red Sea, and El Obeid. All are operated by Sudan Railways. Some lines also extended to some parts of south Sudan 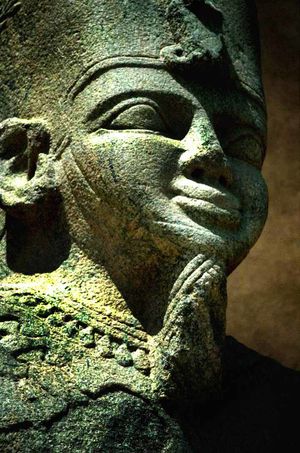 A statue, claimed to depict Natakamani, at the front of the National Museum of Sudan

The largest museum in all of Sudan is the National Museum of Sudan. Founded in 1971, it contains works from different epochs of Sudanese history. Among the exhibits are two Egyptian temples of Buhen and Semna which were originally built by Queen Hatshepsut and Pharaoh Tuthmosis III respectively but relocated to Khartoum upon the flooding of Lake Nasser.

The Republican Palace Museum is located in the former Anglican All Saints' cathedral on Sharia al-Jama'a, next to the historical Presidential Palace.

The Ethnographic Museum is located on Sharia al-Jama'a, close to the Mac Nimir Bridge.

Khartoum is home to a small botanical garden, in the Mogran district of the city.

Khartoum is home to several clubs such as the Blue Nile Sailing Club, the German Club, the Greek Hotel,[23] the Coptic Club, the Syrian Club and the International Club. There is also a football club situated in Khartoum – Al Khartoum