From Infogalactic: the planetary knowledge core
Jump to: navigation, search
This article is about a city in Podillia, Ukraine. For any other definitions, see Khmelnytsky (disambiguation).

The city foundation date is uncertain. Since 1431 it was known as Płoskirów (Ploskurov, Плоскурoв) and was part of the Kingdom of Poland. It was a royal city. After the Second Partition of Poland in 1793, the city was annexed by the Russian Empire and was renamed Proskurov (Проскурoв). According to the Russian census of 1897, Proskurov with a population of 22,855 was the fifth largest city of Podolia after Kamianets-Podilskyi, Uman, Vinnytsia and Balta. In 1920 it became part of Soviet Ukraine. In 1954 the city was finally renamed Khmelnytskyi (Хмельницький) in the honor of the 300th anniversary of a treaty negotiated by Bohdan Khmelnytsky. 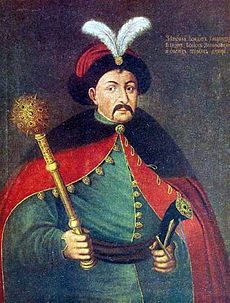 A series of pogroms have been carried out in the region, known together as the Proskurov pogrom. According to Vinnytsia's city archives the pogrom was conducted on the Friday night of February 15, 1919 by one of the otamans (generals) of the Ukrainian People's Army, Otaman Semysenko (also rendered as Semesenko). In total 390 men, 309 women and 76 children were killed, and 500 individuals were wounded.

The Chief Otaman Petliura had been appointed head of state just two days prior to the tragedy, on February the 13th. Petliura issued Order 131 in which he mentioned the fact that numerous Jewish parties in Ukraine (Bund, Poale Zion, Folks-Partei, Unificationists) rose to [defend?] the sovereignty of the Ukrainian Republic and were cooperating with the Ukrainian government, and he condemned such pogroms, calling those initiating them deserters and enemies of the State that must be liquidated. The order was co-signed by the Chief of Staff, Otaman Yunakiv. The order was published in the Ukraina newspaper on February 20 (March 4, old style). Later, Petliura issued a special order to execute Semysenko for being the pogrom initiator. The order was carried out on March 20, 1920.[2][verification needed] The Wikipedia article on Symon Petliura states that Semysenko's execution was postponed until November 1920 due to the "difficult situation".

During the Schwartzbard trial, at the end of which Petliura's assassin was pardoned on the grounds of self-trail (revenge), the main argument of the defense was that Schwartzbard had acted as an avenger of the Jews killed in pogroms perpetrated during Petliura's rule.

The town was occupied by the German Army from July 8, 1941 to March 25, 1944. On November 4, 1941, 5300 Jewish inhabitants of the town and surrounding villages were shot by an Einsatzgruppe.[3] A ghetto was formed on December 14, 1941, where all surviving Jewish inhabitants had to resettle and were subjected to forced labor. They were subsequently killed in the fall of 1942. More than 9500 Jews were killed in the town in total.[4]

The Khmelnytskyi was home, during the Cold War, to the 19th Division of the 43rd Rocket Army of the Soviet Strategic Rocket Forces.[5] The intercontinental ballistic missile silos of the division that were housed there were removed and destroyed, partially with U.S. Cooperative Threat Reduction funding, during the 1990s. 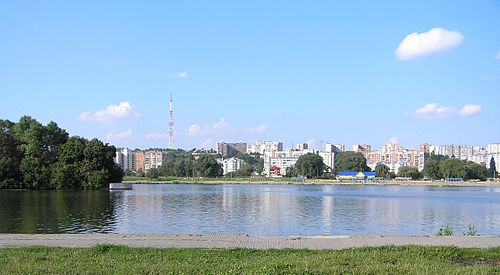 The most abundant make up for the ground in Khmelnytskyi are layers of the following overburden: loess and loess-type rocks. The ground-climatic conditions of Khmelnytskyi are favorable for the cultivation of winter wheat and rye, sugar beet, potato and other crops. Khmelnytskyi is also ideal for the development of gardening and vegetable growing. In the territory of Khmelnytskyi there are the vegetations of two geobotanical zones of Ukraine: Polissya and forest-steppe. Khmelnytskyi and its greater region supplies many rock products, particularly building materials such as: limestone, plaster, chalk, tripoli powder, crystal layers (granites, gneisses), sand, sandstones, and also graphite, saponite, kaolin, phosphorite, lithographic stone and roofing slate. There are also deposits of peat, bitumen, shale and oil.

The average life expectancy of its inhabitants is 65 years for men, and 75 years for women. In 2006 Khmelnytskyi's birth rate continues to grow as 2,593 children were born. Due to Khmelnytskyi's geographical location and natural resources the city has always attracted foreigners, including Turks, Germans, Hungarians, Poles, Lithuanians, Austrians, Swedes and Russians.

Khmelnytskyi has infrastructure for transportation connections with Moscow, Prague, Bratislava, Warsaw, Budapest, Belgrade and all major Ukrainian cities. The distance from Khmelnytskyi to Kiev by railway is estimated to be 366 km (227 mi), by highway it is estimated to be 384 km (239 mi). The highways Kiev-Lviv, Odessa-Lviv and Chernivtsi-Kiev pass through Khmelnytskyi. The city is served by the Khmelnytskyi Ruzhychna Airport. Khmelnytskyi's airport has a 2,200 m (7,217.85 ft) concrete runway; at the airport there is a check point for crossing the state border of Ukraine.

Khmelnytskyi is twinned with: