General view of the Bernardine Monastery in Iziaslav

Khmelnytskyi Oblast (Ukrainian: Хмельницька область, translit. Khmel’nyts’ka oblast’; also referred to as Khmelnychchyna—Ukrainian: Хмельниччина) is an oblast (province) of western Ukraine. The administrative center of the oblast is the city of Khmelnytskyi.

The oblast is subdivided into 20 raions (administrative districts). It consists of 6 municipalities, 13 cities, 24 towns, and more than 1,417 villages.

The following data incorporates the number of each type of administrative divisions of Kiev Oblast:

The beginning of city's main street, Proskurivska street in Khmelnytskyi 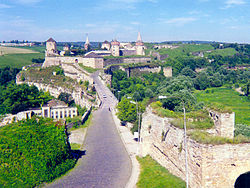 The Kamianets-Podilskyi Castle. The bastion on the right was guarding the bridgehead leading to the fortress. In the far right the "New Castle" is visible.
File:Letichev.jpg
Medieval fortress in Letychiv

The economy of the oblast mostly deals with the energy industry, transport and agriculture. The oblast is situated at a historical crossroad of the railway and highway routes connecting Central Europe to Black Sea coast and Russia (with the city of Shepetivka being the most important railway junction). The Khmelnyts’ka nuclear power plant in the city of Netishyn is the most important industrial company of the oblast. Notable machinery, armament and chemical industries are also present.

Most of Ukraine's oblasts are named after their capital cities, officially referred to as "oblast centers" (Ukrainian: обласний центр, translit. oblasnyi tsentr). The name of each oblast is a relative adjective, formed by adding a feminine suffix to the name of respective center city: Khmelnytskyi is the center of the Khmelnyts’ka oblast’ (Khmelnytskyi Oblast).