The Khoekhoe language /ˈkɔɪkɔɪ/, Khoekhoegowab, also known by the ethnic term Nama /ˈnɑːmə/[3] and formerly as Hottentot, is the most widespread of those non-Bantu languages of southern Africa that contain "click" sounds and have therefore been loosely classified as Khoisan. It belongs to the Khoe language family, and is spoken in Namibia, Botswana, and South Africa by three ethnic groups, the Nama, Damara, and Haiǁom.

It appears that the Damara picked up the language along with the Nama in Botswana, and that they migrated to Namibia separately from the Nama. The Haiǁom, who had spoken a Juu language, later shifted to Khoekhoe. The name for Nama speakers, Khoekhoen, is from the Nama word khoe "person", with reduplication and the suffix -n to indicate the plural. Georg Friedrich Wreede was the first European to study the language, after arriving in Cape Town in 1659.

Khoekhoe is a national language in Namibia, where it is used for teaching up to the university level as well as in the public administration. In Namibia and South Africa, state-owned broadcasting corporations produce and broadcast radio programmes in Khoekhoe.

These are distinct enough that they might be considered two or three distinct languages.

is also close, but is generally counted as a distinct language today. 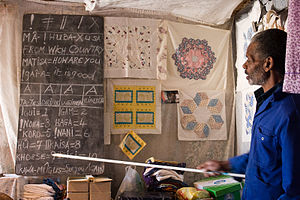 The tones combine into a limited number of 'tone melodies' (word tones), which have sandhi forms in certain syntactic environments. The most important melodies, in their citation and main sandhi forms, are as follows:[5]

Within a phrase, lexical words receive greater stress than grammatical words. Within a word, the first syllable receives the most stress. Subsequent syllables receive less and less stress and are spoken more and more quickly.

Between vowels, /p/ is pronounced [β] and /t/ is pronounced [ɾ]. The affricate series is strongly aspirated, and may be analysed phonemically as aspirated stops; in the related Korana they are [tʰ, kʰ].

Beach (1938)[8] reported that the Khoehkoe of the time had a velar lateral ejective affricate, [kʟ̝̊ʼ], a common realisation or allophone of /kxʼ/ in languages with clicks. This sound no longer occurs in Khoekhoe but remains in its cousin Korana.

The clicks are doubly articulated consonants. Each click consists of one of four primary articulations or "influxes" and one of five secondary articulation or "effluxes". The combination results in 20 phonemes.[9]

The aspiration on the aspirated clicks is often light but is 'raspier' than the aspirated nasal clicks, with a sound approaching the ch of Scottish loch. The glottalised clicks are clearly voiceless due to the hold before the release, and they are transcribed as simple voiceless clicks in the traditional orthography. The nasal component is not audible in initial position; the voiceless nasal component of the aspirated clicks is also difficult to hear when not between vowels, so to foreign ears, it may sound like a longer but less raspy version of the contour clicks.

Tindall notes that European learners almost invariably pronounce the lateral clicks by placing the tongue against the side teeth and that this articulation is "harsh and foreign to the native ear". The Namaqua instead cover the whole of the palate with the tongue and produce the sound "as far back in the palate as possible".[10]

Lexical root words consist of two or rarely three moras, in the form CVCV(C), CVV(C), or CVN(C). (The initial consonant is required.) The middle consonant may only be w r m n (w is b~p and r is d~t), while the final consonant (C) may only be p, s, ts. Each mora carries tone, but the second may only be high or medium, for six tone "melodies": HH, MH, LH, HM, MM, LM.

Vowel-nasal sequences are restricted to non-front vowels: /am an om on um un/. Their tones are also realised as contours.

There have been several orthographies used for Nama. A Khoekhoegowab dictionary (Haacke 2000) uses the modern standard.

In standard orthography, the consonants b d g are used for words with one of the lower tone melodies and p t k for one of the higher tone melodies. W is only used between vowels, though it may be replaced with b or p according to melody. Overt tone marking is otherwise generally omitted.

Glottal stop is not written at the beginning of a word, where it is predictable but is transcribed with a hyphen in compound words, such as gao-aob /kȁòʔòȁp/ 'chief'.

Nama has a subject–object–verb word order and has three gender classes: male, female and neuter. Male and female nouns have a singular, dual and plural; while neuter nouns only have singular and plural number.

Khoekhoe distinguishes between inclusive and exclusive 1st person plural pronouns. Sida is the exclusive form for we, it only includes a specific group; as opposed to sada, which is inclusive and refers to all.

Following is a sample text in the Khoekhoe language.[11]

In this region we find springbuck, oryx, and duiker; francolin, guinea fowl, bustard, and ostrich; and also various kinds of snake.