From Infogalactic: the planetary knowledge core
Jump to: navigation, search
This article is about the ethnic groups subsumed under the term "Khoisan". For the language families subsumed under "Khoisan", see Khoisan languages.

"Khoisan" (/ˈkɔɪsɑːn/; also spelled Khoesaan, Khoesan or Khoe–San) is a unifying name for two groups of peoples of Southern Africa, who share physical and putative linguistic characteristics distinct from the Bantu majority of the region.[1] Culturally, the Khoisan are divided into the foraging San, or Bushmen, and the pastoral Khoi, or more specifically Khoikhoi,[2] previously known as Hottentots.

The San include the indigenous inhabitants of Southern Africa before the southward Bantu migrations from Central and East Africa reached their region, which led to the Bantu populations displacing the Khoi and San to become the predominant inhabitants of Southern Africa. The distinct origin of the Khoi is debated. Over time, some Khoi abandoned pastoralism and adopted the hunter-gatherer economy of the San, probably due to a drying climate, and are now considered San. Similarly, the Bantu Damara people who migrated south later abandoned agriculture and adopted the Khoi economy. Large Khoisan populations remain in several arid areas in the region, notably in the Kalahari Desert. 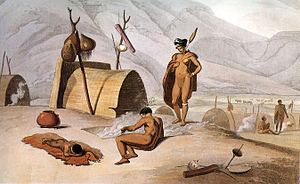 From the beginning of the Upper Paleolithic periods, hunting and gathering cultures known as the Sangoan occupied southern Africa in areas where annual rainfall is less than a metre (1000 mm; 40 in),[3] and today's San and Khoi people resemble the ancient Sangoan skeletal remains. These Late Stone Age people in parts of southern Africa were the ancestors of the Khoisan people who inhabited the Kalahari Desert. Probably due to their region's lack of suitable candidates for domestication, the Khoisan did not have farming or domesticated chickens until a few hundred years ago, when they adopted the domesticated cattle and sheep of the Bantu that had spread in advance of the people's actual arrival.[4] The Bantu people, with advanced agriculture and metalworking technology developed in West Africa from at least 2000 BC, outcompeted and intermarried with the Khoisan in the years after contact and became the dominant population of Southeastern Africa before the arrival of the Dutch in 1652.[5] Furthermore, Khoisan have been the largest population throughout most of modern-human demographic history.[6]

The evidence of the Khoisan's original presence in South Africa is the distribution of their languages today. Khoisan language groups often have extreme differences in structure and vocabulary despite close proximity, which demonstrates a long period of settlement and co-evolution of languages in the same region.[7] In contrast, the languages of Bantu-origin peoples in the region such as the Zulu and Xhosa are all very similar to one another. This indicates a much more recent common ancestry for the first Bantu group that spread and settled across the region.[8] Among their descendants, the Xhosa and Zulu adopted unique Khoisan click consonants and loan words into their respective languages. 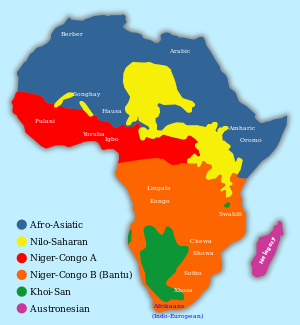 Green: The distribution of the three language families spoken by Khoisan peoples, plus two others in Tanzania that are superficially similar.

After the arrival of the Bantu, the Khoisan and their pastoral or hunter-gatherer ways of life remained predominant west of the Fish River in South Africa and in deserts throughout their region, where the drier climate precluded the growth of Bantu crops suited for warmer and wetter climates. During the colonial era, the Khoisan survived in South Africa, Namibia and Botswana. Today many of the San live in parts of the Kalahari Desert where they are better able to preserve much of their culture and lifestyle.

Against the traditional interpretation that finds a common origin for the Khoi and San, other evidence has suggested that the ancestors of the Khoi peoples (one subset of the Khoisan) are relatively recent pre-Bantu agricultural immigrants to southern Africa, who abandoned agriculture as the climate dried and either joined the San as hunter-gatherers or retained pastoralism to become the Khoikhoi. 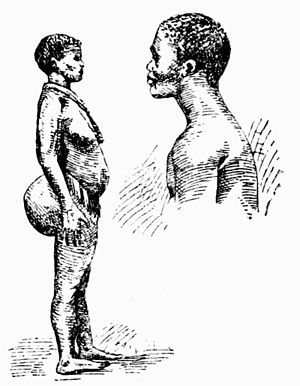 Khoikhoi woman and man (drawing of 1900). The woman is exhibiting steatopygia.

Charles Darwin wrote about the Khoisan and sexual selection in The Descent of Man in 1882, commenting that their steatopygia evolved through sexual selection in human evolution, and that "the posterior part of the body projects in a most wonderful manner".[9]

In the 1990s, genomic studies of worlds peoples found that the Y chromosome of San men share certain patterns of polymorphisms that are distinct from those of all other populations.[10] Because the Y chromosome is highly conserved between generations, this type of DNA test is used to determine when different subgroups separated from one another, and hence their last common ancestry. The authors of these studies suggested that the San may have been one of the first populations to differentiate from the most recent common paternal ancestor of all extant humans, the so-called Y-chromosomal Adam by patrilineal descent, estimated to have lived 60,000 to 90,000 years ago.[11][12] The authors also note that their results should be interpreted as only finding that the Khoisan "preserve ancient lineages", and not that they "stopped evolving" or are an "ancient group", since subsequent changes in their population are in parallel and similar to those of all other human populations.[13]

Similar to findings from Y-Chromosome studies, mitochondrial DNA studies also showed evidence that the Khoe–San people carry high frequencies of the earliest haplogroup branches in the human mitochondrial DNA tree. The most divergent (oldest) mitochondrial haplogroup, L0d, have been identified at its highest frequencies in the southern African Khoe and San groups.[14][17][18][19] The distinctiveness of the Khoisan in both matrilineal and patrilineal groupings is a further indicator that they represent a population historically distinct from other Africans.

In modern South Africa and Namibia, a large share of the Cape Coloureds, Xhosa and Tswana is of partial Khoisan descent, by far outnumbering the unassimilated Khoisan population.

Khoisan people were among many who were dispossessed by colonial and other authorities in the 19th and early 20th centuries. Following the end of apartheid, the South African government allowed Khoisan families up until 1998 to pursue land claims which existed prior to 1913. South African Deputy Chief Land Claims Commissioner Thami Mdontswa has said that constitutional reform would be required to enable Khoisan people to pursue further claims to land from which their direct ancestors were removed prior to 9 June 1913.[20]