Kyiv Pechersk Lavra[3][4] (Ukrainian: Києво-Печерська лавра, Kyievo-Pechers'ka lavra, Russian: Киeво-Печерская лавра, Kievo-Pecherskaya lavra), also known as the Kiev Monastery of the Caves, is a historic Orthodox Christian monastery which gave its name to one of the city districts where it is located in Kiev.

Since its foundation as the cave monastery in 1051[5] the Lavra has been a preeminent center of Eastern Orthodox Christianity in Eastern Europe. Together with the Saint Sophia Cathedral, it is inscribed as a UNESCO World Heritage Site.[6][nb 1] The monastery complex is considered a separate national historic-cultural preserve (sanctuary), the national status to which was granted on 13 March 1996.[8] The Lavra is not only located in another part of the city, but is part of a different national sanctuary than Saint Sophia Cathedral. While being a cultural attraction, the monastery is currently active. It was named one of the Seven Wonders of Ukraine on 21 August 2007, based on voting by experts and the internet community.

Currently, the jurisdiction over the site is divided between the state museum, National Kiev-Pechersk Historic-Cultural Preserve,[9] and the Ukrainian Orthodox Church (Moscow Patriarchate) as the site of the chief monastery of that Church and the residence of its leader, Metropolitan Onuphrius.

Etymology and other names 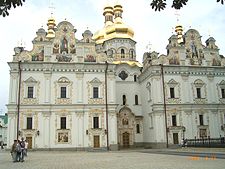 The reconstructed Cathedral of the Dormition, as seen in 2005.

The word pechera means cave. The word lavra is used to describe high-ranking male monasteries for monks of the Eastern Orthodox Church. Therefore, the name of the monastery is also translated as Kiev Cave Monastery, Kiev Caves Monastery or the Kiev Monastery of the Caves (на печерах).

According to the Primary Chronicle, in the early 11th century, Anthony, an Orthodox monk from Esphigmenon monastery on Mount Athos, originally from Liubech of the Principality of Chernihiv, returned to Rus' and settled in Kiev as a missionary of monastic tradition to Kievan Rus'. He chose a cave at the Berestov Mount that overlooked the Dnieper River and a community of disciples soon grew. Prince Iziaslav I of Kiev ceded the whole mount to the Antonite monks who founded a monastery built by architects from Constantinople. 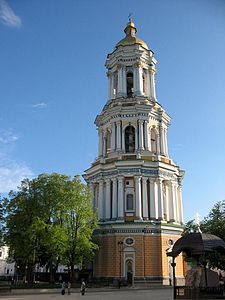 Up-close view of the Great Lavra Belltower with its four tiers in 2005. 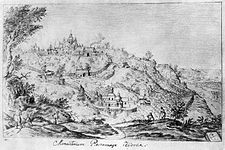 The Near Caves of the Kiev Pechersk Lavra. Sketch by the Dutch artist Abraham van Westerveldt made in 1651.

The Great Lavra Belltower is one of the most notable features of the Kiev skyline and among the main attractions of the Lavra. 96.5 meters in height, it was the tallest free-standing belltower at the time of its construction in 1731–1745, and was designed by the architect Johann Gottfried Schädel. It is a Classical style construction and consists of tiers, surmounted by a gilded dome.

Gate Church of the Trinity

The Gate Church of the Trinity is located atop the Holy Gates, which houses the entrance to the monastery. According to a legend, this church was founded by the Chernihiv Prince Sviatoslav II. It was built atop an ancient stone church which used to stand in its place. After the fire of 1718 the church was rebuilt, its revered facades and interior walls enriched with ornate stucco work made by master craftsman V. Stefaovych. In the 18th century a new gilded pear-shaped dome was built, the facade and exterior walls were decorated with stucco-moulded plant ornaments and a vestibule built of stone attached to the north end. In the early 20th century the fronts and the walls flanking the entrance were painted by icon painters under the guidance of V. Sonin. The interior of the Gate Trinity Church with murals by the early 18th century painter Alimpy Galik is of great artistic value.

The All Saints Church

The All Saints Church erected in 1696–1698 is a fine specimen of Ukrainian baroque architecture. Characteristic of the church facades are rich architectural embellishments. In 1905 students of the Lavra art school painted the interior walls of the church. The carved wooden iconostasis is multi-tiered and was made for the All Saints church in the early 18th century.

Church of the Saviour at Berestov

Main article: Church of the Saviour at Berestove 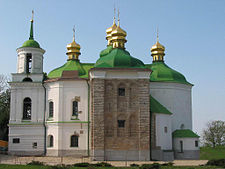 Side view of the Church of the Saviour at Berestove seen with its campanile, designed by architect Andrei Melenskyi in the Classical style. 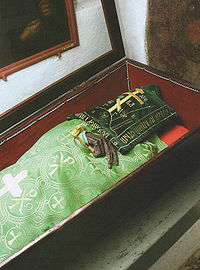 The Kiev Pechersk Lavra caverns are a very complex system of narrow underground corridors (about 1-1½ metres wide and 2-2½ metres high), along with numerous living quarters and underground chapels. In 1051, the monk Anthony had settled in an old cave in one of the hills surrounding the Kiev Pechersk Lavra. This cave apparently grew, with numerous additions including corridors and a church, and is now what we know as the Far Caves. In 1057, Anthony moved to a cave near the Upper Lavra, now called the Near Caves.

Foreign travellers in the 16th–17th centuries had written that the catacombs of the Lavra stretched for hundreds of kilometres, reaching as far as Moscow and Novgorod,[10] which had apparently brought about to the knowledge of the Kiev Pechersk Lavra around the world. 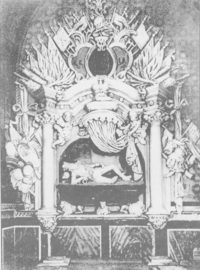 There are over a hundred burials in the Lavra. Below are the most notable ones

During the Soviet era, the bodies of the saints that lay in the caves were left uncovered due to the regime's disregard for religion. However, after the fall of the Soviet Union, the bodies were covered with a cloth and to this day remain in the same state.[citation needed]. 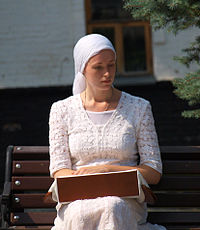 The Kiev Pechersk Lavra is also one of the largest Ukrainian museums in Kiev. The exposition is the actual ensemble of the Upper (Near Caves) and Lower (Far Caves) Lavra territories, which house many architectural relics of the past. The collection within the churches and caves includes articles of precious metal, prints, higher clergy portraits and rare church hierarchy photographs. The main exposition contains articles from 16th to early 20th centuries, which include chalices, crucifixes, and textiles from 16th–19th centuries, with needlework and embroidery of Ukrainian masters. The remainder of the collection consists of pieces from Lavra's Printing House and Lavra's Icon Painting Workshop.[11] The museum also provides tours to the catacombs, which contain mummified remains of Orthodox saints or their relics.

Museum on the lavra territory are:

Next to the monastery is located famous Kiev Arsenal factory, known for the Bolshevik Uprising in 1917.