Lua error in Module:Coordinates at line 668: callParserFunction: function "#coordinates" was not found. Taras Shevchenko University or officially the Taras Shevchenko National University of Kyiv[2] (Ukrainian: Київський національний університет імені Тараса Шевченка), colloquially known in Ukrainian as KNU (Ukrainian: Київський національний універcитет - КНУ) is located in Kyiv, the capital of Ukraine. It is the third oldest university in Ukraine after the University of Lviv and University of Kharkiv. Currently, its structure consists of fifteen faculties (academic departments) and five institutes. It was founded in 1834 as the Kiev Imperial University of Saint Vladimir, and since then it has changed its name several times. During the Soviet Union era, Taras Shevchenko University was one of the top-three universities in the USSR, along with Moscow State University and Leningrad State University. It is ranked as the best university in Ukraine in many rankings (see below). Throughout history, the university has produced many famous alumni including Nikolay Bunge, Mykhailo Drahomanov, Mykhailo Hrushevskyi, Nikolai Berdyaev, Mikhail Bulgakov, Viacheslav Chornovil, Leonid Kravchuk, and many others. 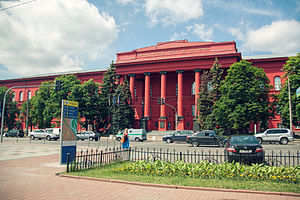 Taras Shevchenko University is named after Taras Shevchenko, a major figure in Ukrainian literature and art. It is an institution of higher education that trains specialists in many fields of knowledge and carries out research. It is considered the most prestigious university in Ukraine[3] and a major centre of advanced learning and progressive thinking.[4] It consists of more faculties and departments, and trains specialists in a greater number of academic fields, than any other Ukrainian educational institution.[citation needed]

Nowadays, as it has done throughout its history, the University retains its role of a major center of learning and research as well as an important cultural center. Its academics and students follow the long-standing traditions of the highest academic standards and democratic ideals. At present, the student body of Taras Shevchenko University totals about 20,000 students; this number includes almost 2,000 students at the Institute of International Relations which is attached to Taras Shevchenko University.

As training highly qualified specialists has always been the main goal, the faculties and departments constantly revise their curricula and introduce new programs. A number of faculties offer 4-year Bachelor's and 2-year Master's Degree programs, together with traditional 5-year Specialist Degree programs. Currently the stress is on student's ability to work independently and meet employer's requirements, thus practical experience in the field being of foremost importance. The curricula of all Taras Shevchenko University faculties are based on the combination of academic instruction with student's research work and the combination of thorough theoretical knowledge with specific skills. Having acquired theoretical knowledge in the first and the second year, in their third year undergraduates choose an area to specialize in. At the same time they choose a field for their independent study, joining elective special seminars; the results of research are usually presented at the meetings of students' scientific societies or at scientific conferences, the most interesting results are published.[citation needed] 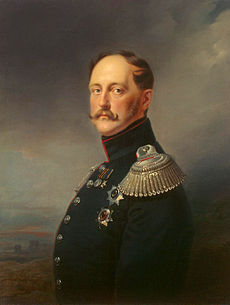 Nicholas I of Russia, a founding father of the Saint Vladimir University in Kiev.

The University was founded in 1834, when the Emperor Nicholas I of Russia signed the Charter about the creation of the University named after Saint Vladimir, the ruler who Christianized the Kievan Rus'. This name was chosen by the authorities of the Russian Empire, where the role of Orthodox Christianity was immense, and may have reflected the ongoing importance of Kiev as the cradle of Eastern Christianity for the entire Empire.

The walls of the main building are painted in red while the tops and bottoms of its columns are painted black. Ukrainian composer Mykola Leontovych's Shchedryk was premiered at the Kyiv University on December 26, 1916 by the university's choir directed by Oleksandr Koshyts.[6]

In 1920, Saint Vladimir University was renamed as Mykhailo Drahomanov University. 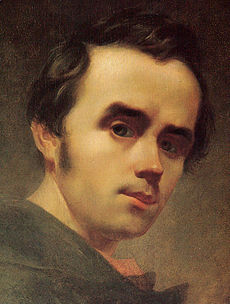 In 1939, Saint Vladimir University was renamed after Taras Shevchenko (upon graduation from the Imperial Academy of Arts in Saint Petersburg, then the capital of the Empire, Taras Shevchenko returned to Kiev, and between 1845–1846, was employed by the Archaeological and Ethnographic Commission at the University until his arrest in 1847). Since 1960, when the first international students were admitted, over 20,000 highly qualified specialists have been trained at Taras Shevchenko University for 120 countries. The first foreign students of the Taras Shevchenko University came from Cuba, Guinea, Indonesia, Ghana, Togo, Nigeria, Cameroon, Benin, Zanzibar, Yemen, Algeria, and Afghanistan. They continued on to became doctors, engineers, agriculturists, diplomats, economists, and statesmen in their respective countries.[7]

The University currently maintains relations and, in some cases, student exchange programs with universities of forty countries;[15] a figure which includes a number of former republics of the Soviet Union and other countries which Ukraine traditionally, over the past 70 years prior to independence in 1991, did not have official bilateral relations with. A small selection of partner universities is displayed below.

These are the 14 faculties and 6 institutes into which the university is divided: 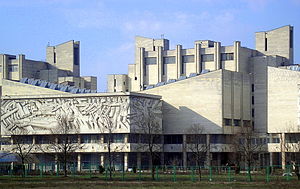 The Cybernetics faculty of KNU, located at the Akademmistechko campus.

After its initial establishment the university was located in private rooms in Pechersk, and was named for St. Vladimir. Now the main building (built 1837-42 by architect V I Beretti) can be found at 60 Vladimirska Street, whilst a number of humanities departments are located at 14 Shevchenko Boulevard 14 (formerly the First Kyiv Gymnasium). Furthermore, there are departments located on Glushkov Street (building 6, built 1954-70) and Vasylkivska Street (Library is located in building No. 90, built in 1939). The university's administration is housed in buildings 58-64 on Vladimirska Street.

It was constructed from 1837–1843 and was built in the late Russian Classicism style, by a Russian architect of Italian descent, Vincent I. Beretti. The building forms an enormous square enclosing a courtyard; the length of the main facade is 145.68m. The walls of the building are painted blood red and the capitals and bases of the portico's columns are painted black, corresponding to the colours of the ribbon of the Order of St. Vladimir (founded in 1782), as Kyiv University used to bear the name of this Order. The motto of the Order, "Benefit, honor and glory" (Pol'za Chest' i Slava) also, subsequently, became the motto of Kyiv University. Local tour guides sometime state that Tsar Nicholas I ordered the entire main building painted red in response to student conscription protests during World War I to remind students of blood spilled by Ukrainian soldiers. The legend does not reflect the historical fact, as the building was painted red before WWI, in 1842. Nicholas I of Russia (1825–1855) died long before World War I (1914–1918). Built at the top of a hill, this building has significantly influenced Kiev's architectural layout in the 19th century. 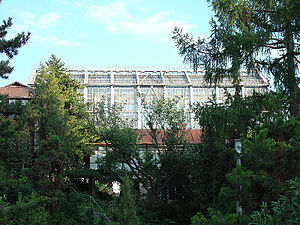 The university's A.V. Fomin Botanical Garden (named after Academician Aleksandr V. Fomin, 1869–1935) was founded in 1839 and planned by architect V. Beretti and botanist R. E. Trautfetterom. The total area covered by the garden is around 5.22 hectares; it has a collection of over 10 000 species, forms and varieties of plants. The garden's greenhouse's height, after reconstruction in 1977, is about 33 meters and is the largest in the world. The university's first orangerie was built in 1846-49 for its collection of tropical and subtropical plants; a collection which has now over two thousand items and is one of the largest in Europe. The gardens are located at the city centre campus, to the rear of the red building; the nearest metro station is Universytet. 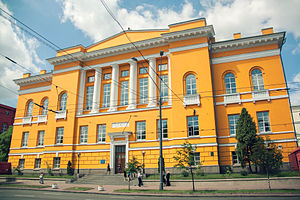 The Humanities Building or 'Yellow' building of the university is located at 14 Shevchenko boulevard, built in 1850-52 it was designed in the classical style by the architect Alexander Vikentiyovych Beretti (1816–95), son of V. Beretti, the architect of by the main (red) building. The building initially belonged to the First Gymnasium (a grammar school, in which taught M. Berlin and M. Kostomarov, and students of which include: artists Nikolai Ge and V.Levandovskyy, M. Zakrevskii historian, economist M. Bunge, poet M.Herbel, sculptor P. Isabella, writers Bulgakov and K. Paustovsky and future academics E. Tarle and O. Bogomolets, A. Lunacharsky). In 1919 the academic Vernadsky, first president of the Academy of Sciences of Ukraine, took up residence in part of the building. Since 1959, the building has been part of the Kyiv National University.

The Maksymovych Library (58 Vladimirska Street), built in 1939-40, is a neo-classical building designed by architects VA Osmaka and P. Alyoshin as the university's Humanities building. Currently the library holds around 3.5 million books, making it currently the largest research library in Ukraine. Along with the No.1 branch of the National Library of Ukraine (62 Vladimirska Street), which was designed by the same architects in the 1929-30, and the main (red) building of the university, the Maksymovych library forms an important and impressive architectural ensemble which is today considered to be one of Kiev's key collective architectural monuments. 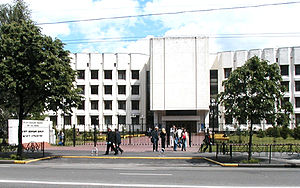 In the 1960s it became imperative that the Kyiv National University acquire more space for its greatly expanded number of departments. It was with this in mind that the building of a complex of new buildings for the university started on the southwestern outskirts of Kiev (opposite the National Exhibition Centre of Ukraine). The authors of the final project were architects V E Ladnyi, M P Budylovskyi, V E Kolomiets and engineer V Y Drizo.[citation needed]

The Institute of International Relations and Institute of Journalism's joint building at 36 Melnikova Street, developed by Kyivproect architects O Nosenko, I Shpara, Yu Duhovichny, O Klishchuk and Y Vig, was awarded the State Prize of Ukraine in the field of architecture in 1995.[27]

The astronomical observatory of Kyiv National University is located at 3 Observatorna Street; founded in 1845, it was initially planned to place an observatory in the Main Building of the university (as evidenced by existing architectural designs for the red building), however, it was later decided to build for a separate building to house the observatory. This task was again entrusted Vincenty Beretta, it was built in 1841-1845 and officially opened on February 7, 1845.[28] 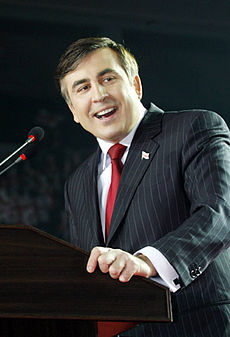