From Infogalactic: the planetary knowledge core
Jump to: navigation, search
This is a Korean name; the family name is Kim.

Kim Dae-jung (Korean pronunciation: [kimdɛdʑuŋ]; 6 January 1924 – 18 August 2009) was the 8th President of South Korea from 1998 to 2003, and the 2000 Nobel Peace Prize recipient. He styled himself as the "Nelson Mandela of Asia" for his long-standing opposition to authoritarian rule and for his controversial Sunshine Policy towards North Korea.[2]

File:Kim Dae-jung billboard, 1971.jpg
Kim Dae-jung as candidate for the presidential election in 1971

Kim was born on 6 January 1924,[3] but he later registered his birth date to 3 December 1925 to avoid conscription during the time when Korea was under Japanese colonial rule. Kim was the second of seven children to middle-class farmers. Kim was born in Sinan in what was then the Jeolla province; the city is now in Jeollanam-do. Kim's family had moved to the nearby port city of Mokpo so that he could finish high school. Kim graduated from Mokpo Commercial High School in 1943 at the top of the class. After working as a clerk for a Japanese-owned shipping company during the Imperial Japanese occupation of Korea, he became its owner and became very rich. Kim escaped Communist capture during the Korean War.[4]

Kim first entered politics in 1954 during the administration of Korea's first president, Syngman Rhee. Although he was elected as a representative for the National Assembly in 1961, a military coup led by Park Chung-hee, who later assumed dictatorial powers, voided the elections.[4] He was able to win a seat in the House in the subsequent elections in 1963 and 1967 and went on to become an eminent opposition leader. As such, he was the natural opposition candidate for the country's presidential election in 1971. He nearly defeated Park, despite several handicaps on his candidacy which were imposed by the ruling regime.[5]

A very talented orator, Kim could command unwavering loyalty among his supporters. His staunchest support came from the Jeolla region, where he reliably garnered upwards of 95% of the popular vote, a record that has remained unsurpassed in South Korean politics.

Kim was almost killed in August 1973, when he was kidnapped from a hotel in Tokyo by KCIA agents in response to his criticism of President Park's yushin program, which granted near-dictatorial powers. Years later, Kim reflected on these events during his 2000 Nobel Peace Prize lecture:

I have lived, and continue to live, in the belief that God is always with me. I know this from experience. In August of 1973, while exiled in Japan, I was kidnapped from my hotel room in Tokyo by intelligence agents of the then military government of South Korea. The news of the incident startled the world. The agents took me to their boat at anchor along the seashore. They tied me up, blinded me, and stuffed my mouth. Just when they were about to throw me overboard, Jesus Christ appeared before me with such clarity. I clung to him and begged him to save me. At that very moment, an airplane came down from the sky to rescue me from the moment of death.

Although Kim returned to Seoul, he was banned from politics and imprisoned in 1976 for having participated in the proclamation of an anti-government manifesto and sentenced for five years in prison, which was reduced to house arrest in 1978.[5] During this period, he was designated a prisoner of conscience by Amnesty International.[7]

Kim had his political rights restored in 1979 after Park was assassinated. However, in 1980, Kim was arrested and sentenced to death on charges of sedition and conspiracy in the wake of another coup by Chun Doo-hwan and a popular uprising in Gwangju, his political stronghold.[8]

Pope John Paul II sent a letter to then-South Korean President Chun Doo-hwan on 11 December 1980, asking for clemency for Kim, a Catholic, who had been sentenced to death a week before. The National Archives of Korea revealed the contents of the letter at the request of the Kwangju Ilbo, the local daily newspaper in Gwangju (Kwangju).[9]

With the intervention of the United States government,[10] the sentence was commuted to 20 years in prison and later he was given exile in the U.S. Kim temporarily settled in Boston and taught at Harvard University as a visiting professor to the Center for International Affairs.[11]

During his period abroad, he authored a number of opinion pieces in leading western newspapers that were sharply critical of the South Korean government. On March 30, 1983, Kim presented a speech on human rights and democracy at Emory University in Atlanta, Georgia and accepted an honorary Doctor of Laws degree by the institution. Two years later, in 1985, he returned to his homeland.

Road to the presidency

Kim was again put under house arrest upon his return to Seoul, but resumed his role as one of the principal leaders of the opposition. When Chun Doo-hwan succumbed to the popular demands in 1987 and allowed the country's first honest presidential election, Kim Dae-jung and the other leading opposition figure, Kim Young-sam, initially promised to unite behind one candidate. However, due to a dispute between the two men, Kim Dae-jung split off from the main opposition party, the Reunification Democratic Party, and formed the Party for Peace and Democracy to run for the presidency. As a result, the opposition vote was split in two, and ex-general Roh Tae-woo – Chun Doo-hwan's hand-picked successor – won with only 36.5% of the popular vote. Kim Young-sam receiving 28% and Kim Dae-jung 27% of the vote.

In 1992, Kim made yet another failed bid for the presidency, this time solely against Kim Young-sam, who had merged the RDP with the ruling Democratic Justice Party to form the Democratic Liberal Party (which eventually became the Grand National Party).[4] Many thought Kim Dae-jung's political career was effectively over when he took a hiatus from politics and departed for the United Kingdom to take a position at Clare Hall, Cambridge University as a visiting scholar.[11] However, in 1995 he announced his return to politics and began his fourth quest for the presidency.

The situation became favorable for him when the public revolted against the incumbent government in the wake of the nation's economic collapse in the Asian financial crisis just weeks before the presidential election. Allied with Kim Jong-pil, he defeated Lee Hoi-chang, Kim Young-sam's designated successor, in the election held on 18 December 1997. When he was sworn in as the eighth President of South Korea on 25 February 1998, it marked the first time in Korean history that the ruling party peacefully transferred power to a democratically elected opposition victor.[4][12] The election was marred with controversy, as two candidates from the ruling party split the conservative vote (38.7% and 19.2% respectively), enabling Kim to win with only 40.3% of the popular vote.[13] Kim's chief opponent, Lee Hoi-chang, was a former Supreme Court Justice and had graduated at the top of his class from Seoul National University School of Law. Lee was widely viewed as elitist and his candidacy was further damaged by charges that his sons dodged mandatory military service. Kim's education in contrast was limited to vocational high school, and many Koreans sympathized with the many trials and tribulations that Kim had endured previously.

The preceding presidents Park Chung Hee, Chun Doo-hwan, Roh Tae-woo, and Kim Young-sam originated from the Gyeongsang region, which became wealthier since 1945 partly due to the policies of the Park, Chun and Roh's regimes. Kim Dae-jung was the first president to serve out his full term who came from the Jeolla region in the southwest, an area that had been neglected and less developed, at least partly because of discriminatory policies of previous presidents. Kim's administration included more individuals from the Jeolla province, leading to charges of reverse discrimination. However, the actual numbers of the ministers and administrators of Kim Dae Jung's government from Jeolla region indicate that they were not over-represented. 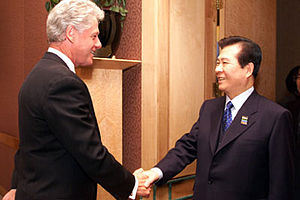 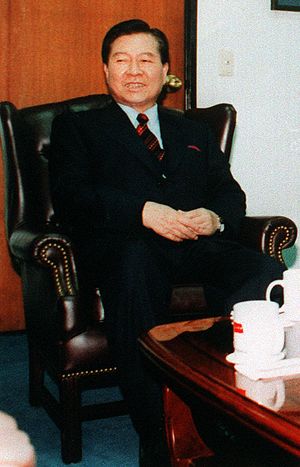 Kim Dae-jung took office in the midst of the economic crisis that hit South Korea in the final year of Kim Young-sam's term. He vigorously pushed economic reform and restructuring recommended by the International Monetary Fund, in the process significantly altering the landscape of South Korean economy.[4] After the economy shrank by 5.8 percent in 1998, it grew 10.2 percent in 1999.[2] In effect, his policies were to make for a fairer market by holding the powerful chaebol (conglomerates) accountable, e.g., greater transparency in accounting practices. State subsidies to large corporations were dramatically cut or dropped. 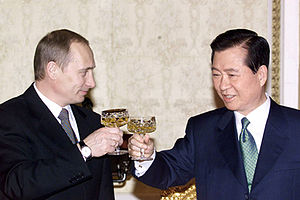 His policy of engagement with North Korea has been termed the Sunshine Policy.[2] He moved to begin détente with the communist regime in North Korea, which culminated in a historic summit meeting in 2000 in Pyongyang with North Korean leader Kim Jong-il. This marked a critical juncture in inter-Korean relations, and the two Koreas have had direct contact with each other since. He was awarded the Nobel Peace Prize for these efforts. However, the historic event was tainted significantly by allegations that at least several hundred million dollars had been paid to Pyongyang. His Chief of Staff, Park Ji-Won, was sentenced to twelve years in prison in 2003 for, among other charges, his role in the Hyundai payment to North Korea for the North–South summit.[14] Also in order to persuade North Korea to attend the summit, several "unconverted long-term prisoners" kept by South Korea were released and returned to North Korea.[15] The effect of the Sunshine Policy was questioned by American newspaper The Village Voice, which cited the money transfers and the coverup of atrocities in the North.[16]

After Kim achieved the presidency and moved into the Blue House, there was uncertainty and considerable speculation about how he would handle the office. He had been sentenced to death by Chun Doo Hwan. Chun and his successor Roe Tae Woo had been sentenced by Kim Dae Jung's predecessor President Kim Young Sam. Kim Dae Jung pardoned Chun.[citation needed]

During his presidency, he introduced South Korea's contemporary welfare state,[17][18] successfully shepherded the country's economic recovery, brought in a new era of economic transparency and fostered a greater role for South Korea in the world stage, including the FIFA World Cup, jointly hosted by South Korea and Japan in 2002. Kim completed his 5-year presidential term in 2003 and was succeeded by Roh Moo-hyun. A presidential library at Yonsei University was built to preserve Kim's legacy, and there is a convention center named after him in the city of Gwangju, the Kim Dae-jung Convention Center.[citation needed]

Kim called for restraint against the North Koreans for detonating a nuclear weapon and defended the continued Sunshine Policy towards Pyongyang to defuse the crisis. He promised all Koreans that he will take active responsibility if North Korean ever try to arm themselves with nuclear weapons, but there is ongoing debate about whether the Sunshine Policy facilitated Pyongyang's nuclear programs. He also received an honorary doctorate at the University of Portland on 17 April 2008 where he delivered his speech, "Challenge, Response, and God."[19]

The Wikileaks data reveals that the U.S. Embassy in Seoul described Kim as "South Korea's first left-wing president" to the American government on his day of death.[20] 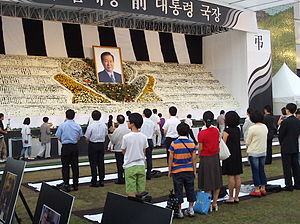 A roadside memorial for Kim Dae-jung

Kim died on 18 August 2009 at 13:43 KST, at Severance Hospital of Yonsei University in Seoul.[21] The cause of death was given as multiple organ dysfunction syndrome.[22] An interfaith state funeral was held for him on 23 August 2009 in front of the National Assembly Building, with a procession leading to the Seoul National Cemetery where he was interred according to Catholic traditions. He is the second person in South Korean history to be given a state funeral after Park Chung-hee.[23] He died about 3 months after the 9th South Korean President Roh Moo-hyun committed suicide on May 23, 2009.