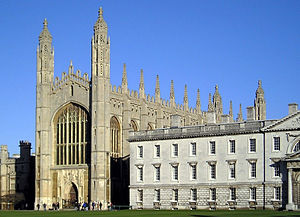 King's College Chapel (partially obscured by the Gibbs' Building), seen from The Backs.

King's College Chapel is the chapel to King's College of the University of Cambridge, and it is considered one of the finest examples of late Perpendicular Gothic English architecture,[1] The chapel was built in phases by a succession of kings of England from 1446 to 1515, a period which spanned the Wars of the Roses. The chapel's large stained glass windows were not completed until 1531, and its early Renaissance rood screen was erected in 1532–36. The chapel is an active house of worship, and home of the King's College Choir. The chapel is a significant tourist site and commonly used symbol of the city of Cambridge.[2][3]

Building of the chapel

Henry VI planned a university counterpart to Eton College (whose chapel is very similar, although unfinished), the chapel being the only portion that was built. The King decided the dimensions of the Chapel. The architect of the chapel is disputed. Reginald Ely, who was commissioned in 1444 as the head press mason, was a possible architect of the chapel. However, Nicholas Close (or Cloos), was recorded as being the surveyor, which has been generally accepted to be synonymous with architect.[4] The first stone of the Chapel was laid, by Henry himself, on St James' Day, 25 July 1446, the College having been begun in 1441. By the end of the reign of Richard III (1485), despite the Wars of the Roses, five bays had been completed and a timber roof erected. Henry VII visited in 1506, paying for the work to resume and even leaving money so that the work could continue after his death. In 1515, under Henry VIII, the building was complete but the great windows had yet to be made.

The Chapel has a total length of 289 feet (88 m), and the width of the main vault is 40 feet (12 m). The interior height is 80 feet (24 m) and the exterior height is 94 feet (29 m).[5] It features the world's largest fan vault, constructed between 1512 and 1515 by master mason John Wastell. The Chapel also features fine medieval stained glass and, above the altar, The Adoration of the Magi by Rubens, originally painted in 1634 for the Convent of the White Nuns at Louvain in Belgium. The painting was installed in the Chapel in 1968, which involved the restoration of the sanctuary floor leading up to the High Altar to its original level (gradations having been created in 1774 by James Essex).[6]

During the Civil War the chapel was used as a training ground by Oliver Cromwell's troops, but escaped major damage, possibly because Cromwell himself, being a Cambridge student, gave orders for it to be spared. Graffiti left by Parliament soldiers is still visible on the north and south walls near the altar. During World War II most of the stained glass was removed and the chapel again escaped damage.[7] 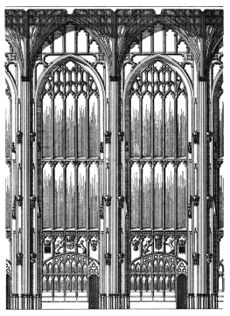 The windows of King's College Chapel are some of the finest in the world from their era. There are 12 large windows on each side of the chapel, and larger windows at the east and west ends. With the exception of the west window they are by Flemish hands and date from 1515 to 1531. Barnard Flower, the first non-Englishman appointed as the King's Glazier, completed four windows. Gaylon Hone with three partners (two English and one Flemish) are responsible for the east window and 16 others between 1526 and 1531. The final four were made by Francis Williamson and Symon Symondes. The one modern window is that in the west wall, which is by the Clayton and Bell company and dates from 1879.

This large, wooden screen, which separates the nave from the altar and supports the chapel organ, was erected in 1532–36 by King Henry VIII of England in celebration of his marriage to Anne Boleyn. The screen is an example of early Renaissance architecture, which is a striking contrast to the Perpendicular Gothic chapel, and it was said to be "the most exquisite piece of Italian decoration surviving in England", by Sir Nikolaus Pevsner.[8]

Side view of the Chapel from inside the college. 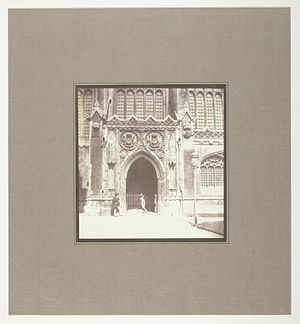 The Chapel is actively used as a place of worship and also for some concerts and college events. Notable college events include the annual King's College Music Society May Week Concert, held always on the Monday of May Week. This event is always highly popular amongst students, alumni and visitors to the city, not least for the complimentary strawberries and cream with Champagne, that follow the concert, outside on the Back Lawn. The King's College May Week Concert 2011 was held on Monday, 20 June.

The Chapel is noted for its splendid acoustics. The world-famous Chapel choir consists of choral scholars, organ scholars (male students from the college), and choristers (boys educated at the nearby King's College School), conducted by Stephen Cleobury. The choir sings services on most days in term-time, and also performs concerts and makes recordings and broadcasts.

In particular, it has broadcast its Nine Lessons and Carols on the BBC from the Chapel on Christmas Eve, during which, a solo treble sings the first verse of Once in Royal David's City. Additionally, there is a mixed-voice Chapel choir of male and female students, King's Voices, which sings evensong on Mondays during term-time.

The Chapel is widely seen as the symbol of Cambridge (for example in the logo of the City Council).

Dean of the Chapel

The Dean of the Chapel is responsible to the College Council and the Governing Body for the conduct of services within the Chapel. King's College Chapel, like other Cambridge colleges, is not formally part of the structure of the Church of England, but the Dean is customarily licensed by the Bishop of Ely. Both he and the Chaplain both take a regular part in chapel services; each is normally present at services six days a week during Full Term and each preach once or twice a term. The Chapel is run by a Chapel Committee chaired by the Dean. A Use of Choirs Committee, also chaired by the Dean, organises the engagements of the Chapel choir. [9]

The large square of grass between the chapel and the River Cam was used by Roger Waters as inspiration in the song "Brain Damage" by Pink Floyd.[citation needed]