The Kingdom of Croatia (Croatian: Kraljevina Hrvatska; Latin: Regnum Croatiae German: Königreich Kroatien) was an administrative division that existed between 1527 and 1868 within the Habsburg Monarchy (also known between 1804 and 1867 as the Austrian Empire). The Kingdom was a part of the Lands of the Crown of St. Stephen, but was subject to direct Imperial Austrian rule for significant periods of time, including its final years. Its capital was Zagreb. 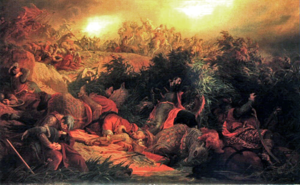 Battle of Mohács 1526 by Bertalan Székely

Following the Battle of Mohács, in 1527 the Croatian and Hungarian nobles needed to decide on a new king. The bulk of the Croatian nobility convened the Croatian Parliament in Cetin and chose the suzerainty to the Austrian king Ferdinand I of Habsburg.[1][2] Some of the nobles dissented and supported John Zápolya, but the Habsburg option prevailed by 1540, when John Zápolya died.

The change of leadership was far from a solution to the war with the Ottomans, in fact, the Ottoman Empire gradually expanded in the 16th century to include most of Slavonia, western Bosnia and Lika. Croatian territory under Habsburg rule was 25 years later reduced to about 20,000 km². In 1558, the parliaments of Croatia and Slavonia were united after many centuries into one. The centre of the Croatian state moved northward from coastal Dalmatia, as these lands were conquered by the Ottomans. The town of Zagreb gained importance, as did nearby Varaždin.[3]

Taking advantage of the growing conflict between Maximilian and Sigismund, Suleyman started his sixth raid of Hungary in 1565 with 100,000 troops. They successfully progressed northwards until 1566 when they took a small detour to capture the outpost of Siget (Szigetvár) which they failed to capture ten years previously. The small fort was defended by Count Nikola Šubić Zrinski and 2,300–3,000 men. They were able to hold their ground for a month, and decimated the Ottoman army before being wiped out themselves. This siege, now known as the Battle of Szigetvár, bought enough time to allow Austrian troops to regroup before the Ottomans could reach Vienna.[4][3] 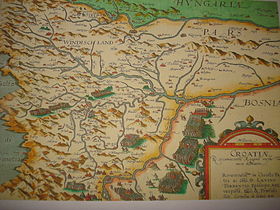 By orders of the king in 1553 and 1578, large areas of Croatia and Slavonia adjacent to the Ottoman Empire were carved out into the Military Frontier (Vojna Krajina) and ruled directly from Vienna's military headquarters. Due to the dangerous proximity to the Ottoman armies, the area became rather deserted, so Austria encouraged the settlement of Serbs, Germans, Hungarians, Czechs, Slovaks and Rusyns/Ukrainians and other Slavs in the Military Frontier, creating an ethnic patchwork. The negative effects of feudalism escalated in 1573 when the peasants in northern Croatia and Slovenia rebelled against their feudal lords over various injustices such as unreasonable taxation or abuse of women in the Croatian and Slovenian peasant revolt. Ambroz Matija Gubec and other leaders of the mutiny raised peasants to arms in over sixty fiefs throughout the country in January 1573, but their uprising was crushed by early February. Matija Gubec and thousands of others were publicly executed shortly thereafter, in a rather brutal manner in order to set an example for others.

After the Bihać fort finally fell to the army of the Bosnian vizier Hasan Pasha Predojević in 1592, only small parts of Croatia remained unconquered. The remaining 16,800 km² where around 400,000 inhabitants lived were referred to as the "remnants of remnants of the once great and renowned Kingdom of Croatia" (Latin: reliquiae reliquiarum olim magni et inclyti regni Croatiae).[5][6]

By the 18th century, the Ottoman Empire was driven out of Ottoman Hungary and Croatia, and Austria brought the empire under central control. 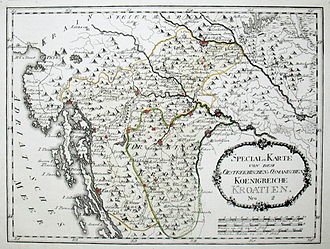 Kingdom of Croatia (including the so-called Turkish Croatia /"Türkisch Kroatien"/, a green marked territory occupied by the Ottomans) on a 1791 map by Austrian cartographer Franz J.J. von Reilly 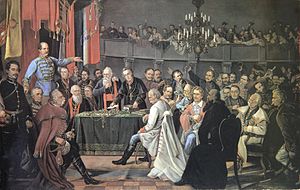 The Croatian Parliament (Sabor) in 1848 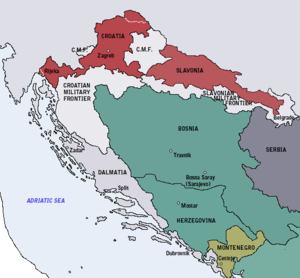 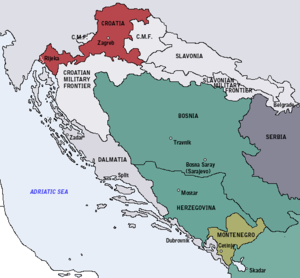 Map of the Kingdom of Croatia (red) in late 1867 and early 1868, before the Nagodba. Other lands of the Austrian Empire are in white (and light grey).

The Austrian imperial army was victorious against the Turks in 1664 but Emperor Leopold failed to capitalize on the success when he signed the Peace of Vasvár in which Hungary and Croatia were prevented from regaining territory lost to the Ottoman Empire. This caused unrest among the Hungarian and Croatian nobility which plotted against the emperor in what became known as the Zrinski–Frankopan Conspiracy in Croatia, but they weren't powerful enough to actually do something about it, even though they negotiated with both the French and the Ottomans. Imperial spies uncovered the conspiracy and on April 30, 1671 executed four esteemed Croatian and Hungarian noblemen involved in it, Petar Zrinski, Fran Krsto Frankopan, Ferenc Nádasdy III and Erazmo Tatenbach, in Wiener Neustadt.[7][8]

Croatia was one of the crown lands that supported Emperor Charles's Pragmatic Sanction of 1713[2] and supported Empress Maria Theresa in the War of the Austrian Succession of 1741–48 and the Croatian Parliament in 1712 signed their own Pragmatic Santion of 1712. Subsequently, the empress made significant contributions to Croatian matters, by making several changes in the administrative control of the Military Frontier, the feudal and tax system. She also gave the independent port of Rijeka to Croatia in 1776. However, she also ignored and eventually disbanded the Croatian Parliament and in 1779, Croatia was relegated to just one seat in the governing council of Hungary, held by the ban of Croatia.

With the fall of the Venetian Republic in 1797, its possessions in eastern Adriatic mostly came under the authority of France which passed its rights to Austria the same year. Eight years later they were restored to France as the Illyrian Provinces, but won back to the Austrian crown by 1815. Though now part of the same empire, Dalmatia and Istria were part of Cisleithania while Croatia and Slavonia were Transleithania. 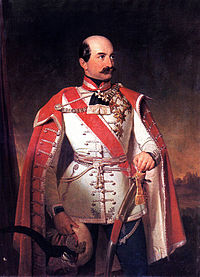 Field Marshal Josip Jelačić, Ban of the Kingdom of Croatia-Slavonia and Commander of the Croatian Military Frontier.

In the 19th century Croatian romantic nationalism emerged to counteract the non-violent but apparent Germanization and Magyarization. The Croatian national revival began in the 1830s with the Illyrian movement. The movement attracted a number of influential figures and produced some important advances in the Croatian language and culture. The champion of the Illyrian movement was Ljudevit Gaj who also reformed and standardized the Croatian literary language. Official language in Croatia has been Latin until 1847 when it has become Croatian.[2]

By the 1840s, the movement had moved from cultural goals to resisting Hungarian political demands. By the royal order of January 11, 1843, originating from the chancellor Metternich, the use of the Illyrian name and insignia in public was forbidden. This deterred the movement's progress but it couldn't stop the changes in the society that had already started.

In the revolutions of 1848 in the Austrian Empire, the Croatian Ban Jelačić cooperated with the Austrians in quenching the Hungarian Revolution of 1848 by leading a military campaign into Hungary, successful until the Battle of Pákozd. Despite this contribution, Croatia was later subject to Baron Alexander von Bach's absolutism as well as the Hungarian hegemony under ban Levin Rauch when the Empire was transformed into a dual monarchy of Austria-Hungary in 1867. Nevertheless, Ban Jelačić had succeeded in the abolition of serfdom in Croatia, which eventually brought about massive changes in society: the power of the major landowners was reduced and arable land became increasingly subdivided, to the extent of risking famine. Many Croatians started emigrating to the New World countries in this period, a trend that would continue throughout the next hundred years and create a large Croatian diaspora.

The Illyrian movement was rather broad in scope, both nationalist and pan-Slavist. It would eventually develop into two major causes:

The loss of Croatian domestic autonomy was rectified a year after the Austro-Hungarian Compromise of 1867, when in 1868 the Croatian–Hungarian Settlement was negotiated. However, the governor (ban) was appointed by Hungary, 55% percent of all tax money went to Budapest, and Hungary had authority over the biggest sea port of Rijeka (something that was reportedly not part of the Settlement actually agreed upon). With this agreement, the Kingdom of Croatia received autonomy in administrative, educational, and judicial affairs.[9]

The first modern population census was conducted in 1857 and it recorded religion of the citizens. Population by religion in the counties of Kingdom of Croatia:[13]