Kingfisher County is a county located in the U.S. state of Oklahoma. As of the 2010 census, the population was 15,034.[1] Its county seat is Kingfisher.[2] The county was formed in 1890 and named Kingfisher by a vote of residents.

The land was given to the Creek Nation by the federal government, but was taken back after the American Civil War.

Limited archaeological surveys may have discovered evidence of pre-contact peoples, including Paleo-Indian and Archaic (6000 BC - 1 AD) groups that used the area for hunting and foraging. The historic Osage, Cheyenne, and Comanche tribes traversed the prairie grasslands of this area.

Before the county's creation, The Chisholm Trail's many routes crossed the area. A stage road which paralleled the trail had important stops at Dover Station, King Fisher Station and Baker Station.

The area was given to the Creek Nation by the federal government after their forced removal from Georgia. At the end of the American Civil War, the Creeks were forced to cede the land back to the federal government for siding with the Confederacy. It became part of the Unassigned Lands, and the area was opened to non-Indian settlement in the land run on April 22, 1889.[3] Several towns, including Kingfisher, Oklahoma developed soon after the land run.[3]

Originally this area was called County 5, when the Organic Act of May 2, 1890 created Oklahoma Territory.[4] At an August 5, 1890 election, the voters of County 5 overwhelmingly voted for the name "Kingfisher" over "Hennessey" and "Harrison". The origin of the name is unclear. The Encyclopedia of Oklahoma History and Culture mentions three different possibilities. The first is that the name memorialized a local rancher, David King Fisher. The second version is that King and Fisher were two different settlers, whose names were combined for the county and town. The third explanation was that the name was for a rancher named John Fisher and for whom Uncle Johns Creek was named.[4] 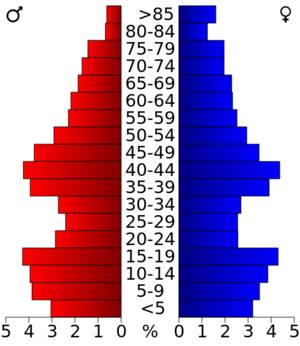 Age pyramid for Kingfisher County, Oklahoma, based on census 2000 data.

Agriculture has been the mainstay of the county since the area was opened for settlement in 1899. Wheat and rye have been the most important crops. Oil and gas exploration became important to the county economy during the 1920s, especially in that part of the county around Hennessey, Cashion and Dover. Roxana was a boomtown during that period, but quickly declined its population peaked at one thousand people. It is now considered a ghost town.

The following sites in Kingfisher County are listed on the National Register of Historic Places: