Leopoldstad (help·info))) is the capital and the largest city of the Democratic Republic of the Congo. It is located on the Congo River.

Once a site of fishing villages, Kinshasa is now an urban area with a 2014 population of over 11 million.[2] It faces the capital of the neighbouring Republic of Congo, Brazzaville, which can be seen in the distance across the wide Congo River. The city of Kinshasa is also one of the DRC's 11 provinces. Because the administrative boundaries of the city-province cover a vast area, over 90% of the city-province's land is rural in nature, and the urban area only occupies a small section in the far western end of the city-province.[1]

Kinshasa is the third largest urban area in Africa after Cairo and Lagos.[2] It is also the second largest "francophone" urban area in the world after Paris, French being the language of government, schools, newspapers, public services and high-end commerce in the city, while Lingala is used as a lingua franca in the street.[4] If current demographic trends continue, Kinshasa should surpass Paris in population around 2020.[5] Kinshasa hosted the 14th Francophonie Summit in October 2012.[6]

Residents of Kinshasa are known as Kinois (in French and sometimes in English) or Kinshasans (English). 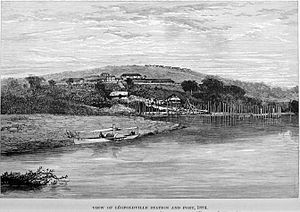 View of Léopoldville station and port (1884)

The city was founded as a trading post by Henry Morton Stanley in 1881. It was named Léopoldville in honor of King Leopold II of Belgium, who controlled the vast territory that is now the Democratic Republic of the Congo, not as a colony but as a private property. The post flourished as the first navigable port on the Congo River above Livingstone Falls, a series of rapids over 300 kilometres (190 mi) below Leopoldville. At first, all goods arriving by sea or being sent by sea had to be carried by porters between Léopoldville and Matadi, the port below the rapids and 150 km (93 mi) from the coast. The completion of the Matadi-Kinshasa portage railway in 1898 provided an alternative route around the rapids and sparked the rapid development of Léopoldville. In 1914 a pipeline was installed so that crude oil could be transported from Matadi to the upriver steamers in Leopoldville.[7] By 1923, the city was elevated to capital of the Belgian Congo, replacing the town of Boma in the Congo estuary.[7] The town, nicknamed "Léo" or "Leopold", became a commercial centre and grew rapidly during the colonial period. In 1965, Joseph-Désiré Mobutu seized power in the Congo in his second coup and initiated a policy of "Africanizing" the names of people and places in the country. In 1966, Léopoldville was renamed Kinshasa, for a village named Kinchassa that once stood near the site. The city grew rapidly under Mobutu, drawing people from across the country who came in search of their fortunes or to escape ethnic strife elsewhere. This inevitably brought a change to the city's ethnic and linguistic composition. Although it is situated in territory that traditionally belongs to the Bateke and Bahumbu people, the lingua franca among African languages in Kinshasa today is Lingala, while the administrative and main written language is French (see further Languages of the Democratic Republic of the Congo). In 1974 Kinshasa hosted The Rumble in the Jungle boxing match between Muhammad Ali and George Foreman, in which Ali defeated Foreman to regain the World Heavyweight title.

In the 1990s a rebel uprising began, which by 1997 had brought down the regime of Mobutu Sese Seko.[7] Kinshasa suffered greatly due to Mobutu's excesses, mass corruption, nepotism and the civil war that led to his downfall. Nevertheless, it is still a major cultural and intellectual center for Central Africa, with a flourishing community of musicians and artists. It is also the country's major industrial center, processing many of the natural products brought from the interior. The city has recently had to fend off rioting soldiers who were protesting the government's failure to pay them.

The ville-province of Kinshasa is divided into four districts which are further divided into 24 communes (municipalities).[1]

Kinshasa is a city of sharp contrasts, with affluent residential and commercial areas and three universities alongside sprawling slums. It is located along the south bank of the Congo River, directly opposite the city of Brazzaville, capital of the Republic of the Congo.

The Congo river is the second longest river in Africa after the Nile, and has the continent's greatest discharge. As a waterway it provides a means of transport for much of the Congo basin; it is navigable for large river barges between Kinshasa and Kisangani, and many of its tributaries are also navigable. The river is an important source of hydroelectric power, and downstream from Kinshasa it has the potential to generate power equivalent to the usage of roughly half of Africa's population.[8]

Under the Köppen climate classification, Kinshasa has a Tropical wet and dry climate. Its lengthy rainy season spans from October through May, with a relatively short dry season, between June and September. Kinshasa lies south of the equator, so its dry season begins around its "winter" solstice, which is in June. This is in contrast to African cities further north featuring this climate where the dry season typically begins around January. Kinshasa's dry season is slightly cooler than its wet season, though temperatures remain relatively constant throughout the year. 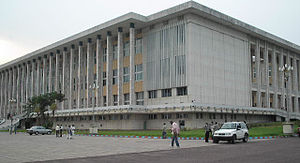 The People's Palace, seat of the Congolese parliament 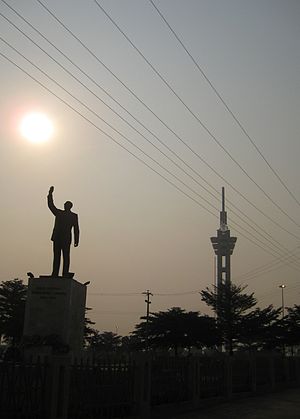 Tower of Limete and monument to Lumumba

Major areas of the city include the Cité de l'OUA, home to the Government of the Democratic Republic of the Congo; the quartier Matonge, known regionally for its nightlife; and the residential area of Gombe.

Notable features of the city include the Gecamines Commercial Building (formerly SOZACOM) and Hotel Memling skyscrapers; L'ONATRA, the impressive building of the Ministry of Transport; the central market; the Kinshasa Museum; and the Kinshasa Fine Arts Academy. The face of Kinshasa is changing as new buildings are being built on the Boulevard du 30 Juin: Crown Tower (on Batetela) and Congofutur Tower. The Boulevard du 30 Juin (Boulevard of the 30 June) links the main areas of the central district of the city. Kinshasa is home to the country's national stadium, the Stade des Martyrs (Stadium of the Martyrs).

Big manufacturing companies such as Marsavco S.A.R.L., All Pack Industries and Angel Cosmetics are located in the center of town (Gombe) in Kinshasa.

There are many other industries, such as Trust Merchant Bank, located in the heart of the city. Food processing is a major industry, and construction and other service industries also play a significant role in the economy.[10]

In 2004, Kinshasa was rated as one of Africa's most dangerous cities in terms of crime. Since the Second Congo War, the city has been striving to recover from disorder, with many gangs hailing from Kinshasa's slums. Muggings, robberies, rape, kidnapping and gang violence are relatively common.[11] Kinshasa's homicide rate is estimated to be as high as 112 homicides per 100,000.[12]

Street children,[13][14] often orphaned, are subject to abuse by the police and military. Of the estimated 20,000 children – up to the age of eighteen – living on Kinshasa's streets, almost a quarter are beggars, some are street vendors and about a third have some kind of employment.[15] Some are there as fallout from the times of war; others are accused of witchcraft[16] and have become outcasts.[17][18][19]

Police regularly round up street children, to an uncertain fate. In 2001, a street child was killed by a policeman, allegedly while fleeing after stealing flour.[20] 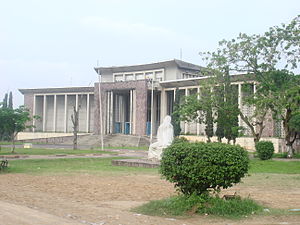 The University of Kinshasa

Kinshasa is home to several higher-level education institutes, covering a wide range of specialities, from civil engineering to nursing and journalism. The city is also home to three large universities and an arts school:

There are twenty hospitals in Kinshasa, plus various medical centres and polyclinics.[22] In 1997, Dikembe Mutombo built a 300-bed hospital near his home town of Kinshasa. 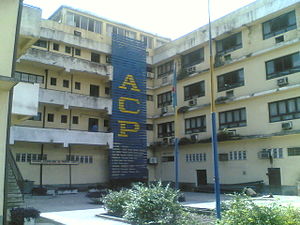 Kinshasa is home to a large number of media outlets, including multiple radio and television stations that broadcast to nearly the entire country, including state-run Radio-Television Nationale Congolaise (RTNC) and privately run Digital Congo and Raga TV. The private channel RTGA is also based in Kinshasa.

Several national radio stations, including La Voix du Congo, which is operated by RTNC, MONUC-backed Radio Okapi and Raga FM are based in Kinshasa, as well as numerous local stations. The BBC is also available in Kinshasa on 92.6 FM.[23]

Most of the media uses French and Lingala to a large extent; very few use the other national languages.

The official language of the Democratic Republic of the Congo, of which Kinshasa is the capital, is French (See: Kinshasa French vocabulary). Kinshasa is the second largest officially Francophone city in the world[25][26] although Lingala is widely used as a spoken language. French is the language of street signs, posters, newspapers, government documents, schools; it dominates plays, television, and the press, and it is used in vertical relationships among people of different social classes; people of the same class, however, speak the Congolese languages (Kikongo, Lingala, Tshiluba or Swahili) among themselves.[27] Thus, while the culture is dominated by the Francophonie, a complex multilingualism is present in Kinshasa.

Several private companies serve the city, among them the Urban Transport Company (STUC) and the Public City train (12 cars in 2002[citation needed]). The bus lines are:

During the early years of the 21st century, the city's planners considered creating a tramway in collaboration with public transport in Brussels (STIB), whose work would start in 2009. That work has not moved beyond the planning stage, partly due to lack of a sufficient electrical supply.[29][30]

As of April 2014 DR Congo has two major national airlines (CAA and Korongo Airlines) which offered flights inside DR Congo and to a small number of international locations. Korongo Airlines is based in Lumbumbashi and CAA was based in Kinshasa but both airlines operated many of the same flight routes.

In 2007 Belgium assisted in a renovation of the country's internal rail network.[32] This improved service to Kintambo, Ndolo, Limete, Lemba, Kasangulu, Gombe, Ndjili and Masina.

Kinshasa is the major river port of the Congo. The port, called 'Le Beach Ngobila' extends for about 7 km (4 mi) along the river, comprising scores of quays and jetties with hundreds of boats and barges tied up. Ferries cross the river to Brazzaville, a distance of about 4 km (2 mi). River transport also connects to dozens of ports upstream, such as Kisangani and Bangui.

There are road and rail links to Matadi, the sea port in the Congo estuary 150 km (93 mi) from the Atlantic Ocean.

There are no rail links from Kinshasa further inland, and road connections to much of the rest of the country are few and in poor condition.

The city has two airports: N'djili Airport is the main airport with connections to other African countries as well as to Brussels, Paris and some other destinations. N'Dolo Airport, located close to the city center, is used for domestic flights only with small turboprop aircraft.