The Kipsigis are a Nilotic ethnic group of Kenya. Their first language is Kipsigis, which belongs to the Nilo-Saharan language family. The traditional occupation of the Kipsigis is herding. In pre-colonial Kipsigis society, there was a warrior element. Living on the Western Highlands at an altitude of 1500 to 2000m, the Kipsigis now also grow maize, wheat, pyrethrum and tea.[1] 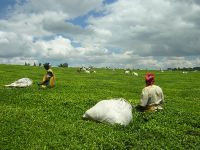 The Kipsigis describe their place of origin as To near Lake Baringo. The Kipsigis are a Nilotic (Nilo hamitic) people. They are the most populous sub-group of the Kalenjin, a subdivision of Nilotes, who originated in the South Sudan region. Another Kalenjin sub-group are the Tatonga people of Tanzania. In the 1700s, the two tribes migrated to the present-day region of Shinyanga in western Tanzania. Later, the Kipsigis returned to Kericho and a smaller group moved south to Angata Barigoi near the Tanzanian border. By the 19th century, the Kipsigis were living in the Rift Valley province of Kenya.

British rule forced the Kipsigis into the colonial market economy.[2][3]

The Kipsigis inhabit the highlands of Kericho from Timboroa to Mara River in the south, and from Mau Escarpment in the east to Kebeneti in the west . The Kipsigis also live in parts of Laikipia, Kitale, Nakuru, Narok, Trans Mara District, Eldoret and the Nandi Hills.Bomet

The mother tongue of the Kipsigis is Kipsigis. It belongs to the Nilo-Saharan language family. Dialects of the language resemble Nandi. In 2007, there were approximately 471,000 speakers of Kipsigis, most in the Rift Valley. The number of speakers has been increasing.[4]

The Kipsigis have a circular view of spirituality. The ancestors' souls return to earth, and inhabit the bodies of the newly. The traditional religion includes the practice female circumcision. Christianity has been adopted in some groups.

Tulu-ap Sigis is a hill near Londiani township, Kericho county, Kenya. To the Kipsigis, it has both religious and cultural importance.[5]

Kipsigis have a tradition of humility, endurance of hardship, strong emotional expression, loyalty, courage hospitality and courtesy. Artists such as Joel Arap Kimeto, Paul Sang Temugo, Paul Subembe, Kipchamba Arap Tapotuk and the comedian, Bomori Araap Baikalyaang, are from the Kipsigis community. The Segechek are a smaller clan with a belief in luck, wisdom and wealth and secretiveness.

As with some Bantu groups, the Kipsigis and other Nilotes in the Great Lakes region have, through interaction, adopted customs from Southern Cushitic groups, including the age set system of social organization, circumcision, and elements of vocabulary.[6][7]

Kipsigis men undergo circumcision at about 14 years of age. Afterwards, the boy lives in a menjo near a forest or away from the main community while they heal. During this period, Kipsigis males undergo three traditional ceremonies called the kelab-eun, the tyenjinet and the kayaet. After the first ritual, the boys are allowed to venture out into the forest for hunting using bows and wood-made-arrows. It is at this point in time that they master the use of the weapons of traditional warfare.

Traditionally, marriage is an important custom in Kipsigis society. The belief that the reincarnated spirit enters the newborn means having a family is desired. Secondly, a legitimate male heir is needed to inherit property (livestock).[8]

Marriage is strictly exogamous, no male may marry a woman of his clan or totem. Descendants of a woman may marry after the third generation. Exogamy extends to the family of the man and woman assigned to care for teenage initiates (boys and girls). It also extends through generations. One may not marry the children of a man of the same generation.[8]

Girls are available for marriage as soon as their initiation is complete. The betrothal ceremony of girls before their initiation is the same as the actual wedding ceremony. Men may marry at any age. A marriage is arranged through a number of visits of the groom's father to the family of the girl he chooses. A dowry of cattle is promised. The itself ceremony may take up to three hours.[8]

Polygamy and other marriage states

Polygamy is practiced with certain restrictions. A widow may become the partner of her husband's brother. A childless elderly widow may 'wed' a young woman for support.[8]

A kokwet, a word derived from kok, a man's sitting place, is used to signify the neighborhood or primary community of 20 to 40 interrelated homesteads. Adult brothers tend to establish homesteads in different areas.

Thus, the ortinwek (exogamous groups) are dispersed and intermingled. On the other hand, marriages tend to be between geographically nearby families. Neighbourhoods become small networks of direct and indirect affinal (connected by marriage) relationships together with a few further connections of direct agnation (relationship through the male side of the family) or common clan membership.

Strictly speaking, kokwet refers to the occasional gatherings of homestead heads and junior men to, for instance, make group decisions, settle local disputes, reprimand wrong-doers or celebrate communal work harvests. Kokwet meetings are held some distance from any particular homestead yard. The meetings are open and are attended by men interested in the matter at hand. Whether the issue arises from domestic problems or breaches of the norms of public conduct, individual interests are expressed in terms of kinship. Senior men represent themselves at most meetings and dominate discussion. Younger men may need to attend because of family connections or with friends of their age group. Younger men speak only when their opinions or knowledge are solicited. Women and children may be called to kokwet meetings to give evidence but otherwise do not attend.

Streams and rivers hinder interaction and so there is a tendency for communities to develop on particular hillsides or areas of higher ground. However, communities are not ultimately defined by topographical features rather, they are marked by nodes or focal points. Place names may refer to a past event or a significant natural feature. The topographical areas that place names describe are not arranged hierarchically nor are they mutually exclusive. For example, koret, the area of a few communities and emet, the tribal region, are not prescribed by boundary lines.[9]