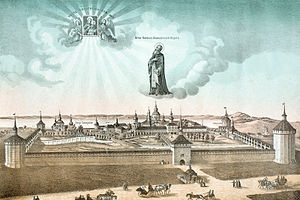 The monastery in the 19th century 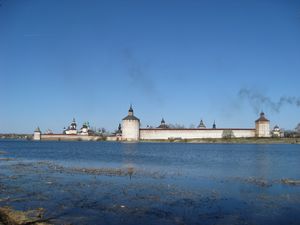 Kirillo-Belozersky Monastery (Russian: Кирилло-Белозерский монастырь), loosely translated in English as St. Cyril of Beloozero's Monastery, used to be the largest monastery of Northern Russia. The monastery was dedicated to the Feast of the Dormition of the Theotokos, for which cause it was sometimes referred to as the Dormition Monastery of St. Cyril. By the 20th century, the town of Kirillov had grown nearby.

The monastery was founded in 1397 on the bank of Lake Siverskoye, to the south from the town of Beloozero, in the present-day Vologda Oblast. Its founder, St. Cyril or Kirill of Beloozero, following the advice of his teacher, St. Sergius of Radonezh, first dug a cave here, then built a wooden Assumption chapel and a loghouse for other monks. Shortly before the creation of the monastery, the area fell under control of the Grand Duchy of Moscow.

Being a member of the influential Velyaminov clan of boyars, Kirill relinquished the office of father superior of the greatest cloister in medieval Moscow—the Simonov monastery. His ties with the ruling elite were still close, however, as his letters to sons of Dmitri Donskoi clearly demonstrate. It seems that the Muscovite rulers regarded Kirill's monastery as an important strategic point, both for Northern trade and in their struggle with the Novgorod Republic. By 1427, when Kirill died, the prince of Belozersk-Mozhaisk (subject to the Grand Prince of Moscow) was the monastery's patron and the monastery was administratively subordinate to the Archbishop of Rostov.[1] Under Hegumen Trifon (1434/5–1447/8), social and administrative reforms were undertaken, including the adoption of an Athonite cenobitic rule. A Byzantine-style secondary school was established at which translations of textbooks on grammar, semantics, geography, and history were used. A lasting legacy of the school were bibliographical studies, exemplified by the elder Yefrosin, and text critical studies, exemplified by Nil Sorsky (1433–1508). Nil also founded a skete on the Sora River near the monastery.

In the 16th century, the monastery was the second richest landowner in Russia, after its model, the Trinity Monastery near Moscow. Ivan the Terrible not only had his own cell in the cloister, but also planned to take monastic vows here. The cloister was also important as a political prison. Among the Muscovite politicians exiled to Kirillov were Vassian Patrikeyev, Tsar Simeon Bekbulatovich, Patriarch Nikon, and the prime minister Boris Morozov.[1] In December 1612, the monastery was besieged by Polish-Lithuanian vagabonds, the Lisowczycy, who failed to capture it.

The vast walled area of the monastery comprises two separate priories with eleven churches, most of them dating to the 16th century. Of these, nine belong to the Uspensky (Assumption) priory by the lake. The Assumption cathedral, erected by Rostov masters in 1497, was the largest monastery church built in Russia up to that date. Its 17th-century iconostasis features many ancient icons, arranged in five tiers above a silver heaven gate endowed by Tsar Alexis in 1645. A lot of valuable objects kept in the sacristy are personal gifts of the tsars who visited the monastery. 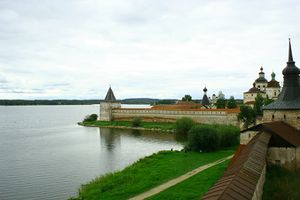 View from one of the monastery towers.

The smaller Ivanovsky priory is dedicated to St. John the Precursor, the patron saint of Ivan the Terrible. The oldest church of the priory was commissioned by Ivan's father, for the benefit of the "mendicant brethren", soon after his visit to the monastery in 1528. Subsequently, the monks incurred the tsar's displeasure by constructing St. Vladimir's Chapel over the grave of the exiled Prince Vorotynsky. Although the tsar chastised them for having broken canonical requirements, the chapel — which became the first family mausoleum in Russia — survived Ivan's reign and was expanded to its present form in 1623.

The monastery walls, 732 meters long and 7 meters thick, were constructed in 1654-80. They incorporate parts of the earlier citadel, which helped to withstand the Polish siege in 1612. At first construction works were supervised by Jean de Gron, a French military engineer known in Russian sources as Anton Granovsky. After the monastic authorities denigrated his Western-style design as alien to Russian traditions, Granovsky was replaced by a team of native masters. The fortress was the largest erected in Muscovy after the Time of Troubles; its walls feature numerous towers, each built to a particular design. The most remarkable are the Chasuble, the Tent-like, the Vologda, and the Smithy towers.

After the Bolsheviks had the monastery secularised and turned into museum (1924), a wooden shrine from 1485 and several traditional timber structures were put on exhibit on the grounds. During Soviet restoration works, superb 16th-century frescoes were discovered in the gate church of St. Sergius (1560–94).

On the other hand, the monastic library and some other treasures were transferred to Moscow or St Petersburg. These included the oldest extant copies of the 12th-century Daniel's Pilgrimage and the Zadonshchina.

The ensemble of the monastery has been designated as a cultural heritage monument of federal significance.[3] As of January 2013, images from the monastery and grounds were available via Google Street View.