The Kirov-class battlecruiser is a class of nuclear-powered warship of the Russian Navy, the largest and heaviest surface combatant warships (i.e. not an aircraft carrier or amphibious assault ship) currently in active operation in the world. Among modern warships, they are second in size only to large aircraft carriers, and of similar size to a World War I-era battleship. The official designation of the ship-type is "heavy nuclear-powered guided missile cruiser" (Russian: тяжёлый атомный ракетный крейсер), but because of their size and general appearance, the ships are often referred to as battlecruisers by western defense commentators.[3]

Originally built for the Soviet Navy, the class is named for the first of a series of 4 ships to be constructed, Kirov, which was renamed Admiral Ushakov in 1992. Original plans called for the construction of 5 ships, however the last was cancelled. In Russia this class of ship is usually referred to by the designation Project 1144 Orlan (sea eagle). Only Pyotr Velikiy is currently operational. Admiral Nakhimov is projected to re-enter the Russian Navy in 2018. Russia planned to reactivate the remaining two vessels by 2020,[2][4] but recent reporting suggests that the reactors in Admiral Ushakov and Admiral Lazarev are in a poor condition, and these ships cannot be safely reactivated.[5][6][7]

The appearance of the Kirov class played a key role in the recommissioning of the Iowa-class battleships by the United States Navy in the 1980s.[8][9][10] 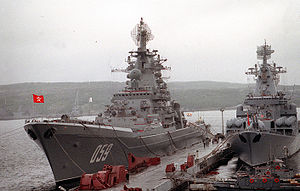 The Kirov class's main weapons are 20 P-700 Granit (SS-N-19 Shipwreck) missiles mounted in deck, designed to engage large surface targets. Air defense is provided by twelve octuple S-300F launchers with 96 missiles and a pair of Osa-MA batteries with 20 missiles each. Pyotr Velikiy carries some S-300FM missiles and is the only ship in the Russian Navy capable of ballistic missile defence.[2] The ships had some differences in sensor and weapons suites: Kirov came with SS-N-14 anti-submarine warfare (ASW) missiles, while on subsequent ships these were replaced with 9K331 Tor surface-to-air missile (SAM) systems. The Tor installation is in fact mounted further forward of the old SS-N-14 mounting, in the structure directly behind the blast shield for the bow mounted RBU ASW rocket launcher. Kirov and Frunze had eight 30 mm (1.2 in) AK-630 close-in weapon systems, which were supplanted with[clarification needed] the Kashtan air-defence system on later ships.

The lead ship, Kirov (renamed Admiral Ushakov in 1992 after the dissolution of the Soviet Union) was laid down in June 1973 at Leningrad's Baltiysky Naval Shipyard, launched on 27 December 1977 and commissioned on 30 December 1980. When she appeared for the first time in 1981, NATO observers called her BALCOM I (Baltic Combatant I).

Kirov suffered a reactor accident in 1990 while serving in the Mediterranean Sea. Repairs were never carried out, due to lack of funds and the changing political situation in the Soviet Union.

In 1983, a command and control ship, the SSV-33 Ural was launched, although the ship would not be officially commissioned until 1989. She utilized the basic hull design of the Kirov-class vessels, but with a modified superstructure, different armament, and was intended for a different role within the Soviet Navy. Ural was decommissioned and laid up in 2001, due to high operating costs, and is scheduled to be scrapped in 2017.

Frunze, the second vessel in the class, was commissioned in 1984. She was assigned to the Pacific Fleet. In 1992, she was renamed Admiral Lazarev. The ship became inactive in 1994 and was decommissioned four years later. She is currently in reserve. On 19 September 2009, General Popovkin, Deputy MOD for Armaments, said the MOD is looking into bringing Admiral Lazarev back into service.[11]

Kalinin, now Admiral Nakhimov, was the third ship to enter service, in 1988. She was also assigned to the Northern Fleet. Renamed Admiral Nakhimov,[when?] she was mothballed in 1999 and reactivated in 2005. She is in overhaul at Severodvinsk Shipyard.

Construction of the fourth ship, Yuriy Andropov, encountered many delays; her construction was started in 1986 but was not commissioned until 1998. She was renamed Pyotr Veliky (Peter the Great) in 1992.[12] She currently serves as the flagship of the Russian Northern Fleet.

On 23 March 2004, English language press reported the Russian Navy Commander-in-Chief, Fleet Admiral Vladimir Kuroedov said Pyotr Veliky's reactor was in an extremely bad condition and could explode "at any moment", a statement which may have been the result of internal politics within the Russian Navy.[13] The ship was sent to port for a month, and the crew lost one-third of their pay.

A fifth Kirov-class cruiser was planned; originally named Fleet Admiral of the Soviet Union Kuznetsov (also reported as Dzerzhinsky), the ship was never laid down.[12] The name was later changed to Oktyabrskaya Revolutsiya (October Revolution),[14] and then just Kuznetsov;[15] finally, on 4 October 1990, the plan for a fifth ship was abandoned.[12]

The Russian Navy initially planned to return both Admiral Ushakov and Admiral Lazarev to service after several years of disuse. However, it was later indicated that the condition of the reactor cores of both ships was such that it would prove difficult, expensive and potentially dangerous to remove the spent nuclear fuel and repair the cores. As a consequence, it is likely that both ships will be scrapped.[5][6][7] 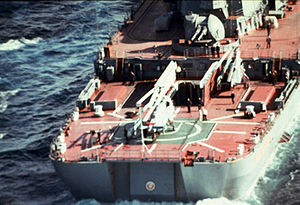 The flight deck of Kalinin showing the hangar doors open and a Ka-25 and a Ka-27.