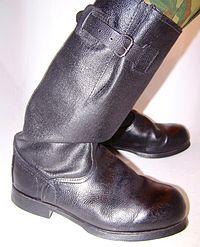 Kirza (Russian: Кирза) is a type of artificial leather based on the multi-layer textile fabric, modified by membrane-like substances, produced mainly in the Soviet Union and Russia. The surface of kirza imitates the pig leather.

Sometimes, English dictionaries translate кирза as kersey. It is not quite correct, since kersey is a material of natural origin known from the Middle Ages, though it is kersey that was used for production of first kirza.[1] According to a popular legend, the name kirza is an acronym for Kirovskiy Zavod (Kirov factory), a factory producing artificial leather located near Kirov, but the actual name of the factory was Iskozh (an acronym for "iskusstvennaya kozha" - artificial leather),[2] so the legend is just an example of folk etymology.

The basic technology of getting a boots leather alternative was invented in 1904 by Mikhail Pomortsev who used a mixture of egg yolk, rosin and paraffin wax to impregnate kersey. The new material received several awards in Russia and abroad, but was not used due to leather boots manufacturers' lobby. Though being much needed in the army after the Russian revolution, it remained relatively expensive for Soviet Russia until invention of synthetic latex in early 1930's to replace the impregnating mixture used initially. In 1939, Aleksandr Khomutov, the chief engineer of Kozhimit synthetic leather factory in Moscow, and his fellow engineer Ivan Plotnikov developed the new kirza that was named Kirza SK. Its mass production began during the Winter War of the Soviet Union against Finland. Initially the material proved to be unfit for winter conditions, and its production was halted. However, very soon the technology was improved and the mass production was resumed in the autumn and winter of 1941 during the German invasion of Soviet Union, since the large numbers of footwear were badly needed for the Red Army.

For the invention of the new kirza production technology, Aleksandr Khomutov, Ivan Plotnikov and seven other specialist was awarded the Stalin Prize of the 2nd degree on 10 April 1942.

Since that time kirza has been continuously produced in the Soviet Union and then Russia, as well as in some other countries. Basically the technology didn't change much from 1941. About 85% of kirza produced in Russia goes for military boots (including the modern combat boots). Most of the modern kirza boots are produced from a combination of 85% kirza and 15% of specially prepared natural leather (the so-called yuft or Russia leather). About 150 million pairs of kirza footwear has been produced up to this time.