The Kists (Georgian: ქისტები, Chechen: Kistoj, Kisti) are a Chechen subethnos in Georgia. They primarily live in the Pankisi Gorge, in the eastern Georgian region of Kakheti, where there are approximately 9,000 Kist people.

The Kist people's origins can be traced back to their ancestral land in lower Chechnya. In the 1830s and 1870s they migrated to the eastern Georgian Pankisi Gorge and some adjoining lands of the provinces of Tusheti and Kakheti. Named "Kists" (ქისტები) in Georgian, they are closely related culturally, linguistically and ethnically to other Nakh-speaking peoples such as Ingushs and Chechens, but their customs and traditions share many similarities also with the eastern Georgian mountaineers.

Around the same region of Georgia, there is also a related but still different community of Northeast Caucasian origin called Bats.

Currently there are six Kist villages in Pankisi: Duisi, Dzibakhevi, Jokolo, Shua Khalatsani, Omalo (different from the village of Omalo in Tusheti), and Birkiani. The Kist community remains quite small and are scattered across northeast Georgia, but in the past decade the number of residents in the Pankisi area has at least doubled due to an influx of refugees from the neighboring Chechnya.

In 1989, it was calculated that Pankisi was about 43% Kist, 29% Georgian and 28% Ossetian, but many of the Ossetians later fled as a result of the more hostile situation due to the Georgian-Ossetian conflict.[2]

Relationships between the local Ossetians and Georgians and between the Kists and Ossetians have become tense, but remains largely peaceful as of today. The Ossetian inhabitants are sympathetic to the Chechen refugees, whom they see as protecting them against oppression by the Kists. The Ossetians feel pressured by the Kists and have been leaving their villages in the Pankisi Gorge to resettle in Northern Ossetia. Because they often cannot sell their properties, they leave behind cultivated lands and houses built over many generations. Kists and Chechen refugees have settled in these abandoned houses. In this manner, the Ossetian villages of Dumasturi, Kvemo Khalatsani, and Tsinubani were vacated from 1998 to 2002.

In 1788 George Ellis wrote about Kisti: "This nation extends from the highest ridge of Caucasus, along the Sundsha rivulets. They are bounded to the west by the little Cabarda, to the east by the Tartars and Lesguis, and to the south by the Lesguis and Georgians." Their districts are: (1) Inguishi, (2) Endery, (3) Axai, (4) Ackinyurt, (5) Ardakli, (6) Wapi, (7) Angusht, (8) Shalkha, (9) Tslietshen, (10) Atakhi, (11) Kulga (or Dshanti), (12) Galgai (Halha), (13) Tshabrilo and Shabul, (14) Tshishni-Kabul, (15) Karaboulak; (16) and (small tribes) Meetsti, Meredshi, Galashka and Duban. "The different tribes of this restless and turbulent nation are generally at variance with each other, and with all their neighbours."[3] In footnote: "Their religion is very simple, but has some traces of Christianity. They believe in one God, whom they call Dailé, but have no saints or religious persons. They celebrate Sunday, not by any religious ceremony, but by resting from labour. They have a fast in spring, and another in summer. They observe no ceremonies either at births or deaths. They allow of poligamy, and eat pork. One kind of sacrifice is usual among them : at certain times a sheep is killed by a person who seems to be considered as a kind of priest, as he is obliged to live in a state of celibacy. His habitation is in the mountains, near an old stone church, which is said to be adorned with various statues and inscriptions. Under the church is a vault that contains certain old books, which, however, no one ever attempts to approach. Güldenstädt was prevented by the weather [snow] from visiting this church."[4]

The early history of the Kist people is not well known and there are few sources mentioning their traditions, culture and history. The only historical sources available about the ethnic Kists in the area of Pankisi are found in the Georgian press, dated in the 1880s by E.Gugushvili, Zakaria Gulisashvili, Ivane Bukurauli, and Mate Albutashvili (ethnic Kist).

One of the greatest Georgian poets Vazha-Pshavela dedicated his epic Aluda Ketelauri and The Host and the Guest to the story of Kist-Khevsur conflict which occurred in the 18th and 19th centuries. Based on religious and cultural difference, both Caucasian nations were engaged in fierce fighting. Vazha-Pshavela celebrates heroism of both nations and underlines the senselessness of their conflict.

During the Second World War, the Kists were the only Chechens in the Soviet Union who were not deported by Stalin in 1944.[5]

During the Second Chechen War, the Kists gave shelter about 7,000 refugees from Chechnya. Some of them have crossed the mountainous passes to join Chechen fighters against the Russians, leading to the Pankisi crisis in the early 2000s.

The majority of Kists are Sunni Muslim; however, there are still remaining small pockets of Christian Kists in Pankisi, Tusheti and Kakheti. To this day, the Kists worship the Khevsur sacred places (jvari) and make sacrifices to the Anatori jvari near the Khevsureti village of Shatili, which is located at the Georgian-Chechen border. The Anatori jvari was also considered sacred by Chechens in Maisti and Melkhisti. Highlanders from both the northern Caucasus and Georgia participated together in religious celebrations. Although today the Kists pray in the mosque in the village of Duisi, they also pray at the sites of old, now-ruined Christian sanctuaries. They also pray in Saint George church in the village of Joqolo and attend the religious celebration Alaverdoba in the Alaverdi Monastery of Kakheti. Finally, the Kists celebrate also Tetri Giorgoba, a local variation of St George's Day.

When the Kists first arrived in the valley in the early 19th century from Chechnya and Ingushetia, their religious practices included both Islam and their original Nakh religion, with some overlap with the indigenous beliefs of their highland Georgian neighbors. There may have also been vague Christian influences. In the latter half of the 19th century, the Russian government pressured the Kists to convert to Orthodox Christianity, and there were various episodes of mass baptisms and church construction. In 1902, Kists who had remained Muslim constructed a mosque in Duisi, but the Russian government refused to recognize it. The Duisi mosque was forcefully closed, along with other religious structures after the Bolshevik revolution, and not reopened until 1960. Sanikidze notes that many Kists, regardless of their designation, have a mix of Muslim, Christian and indigenous religious practices.[6]

The position of Islam strengthened among the Kists in the Soviet period, in part because "wandering" mullahs continued to proselytize and managed to persuade many to convert to Islam, a process that continued into the 1970s. In sum, over the years considerable numbers of Kists became Christian, but most of those who did later reconverted to Islam. Even so, until around 1970, a considerable part of the villagers of Jokolo, Omalo, and Birkiani were Christian, and a Christian chapel was built in Omalo in the 1960s. In the 1970s, however, many Christians in Jokolo and Omalo returned to the Islamic faith. As noted earlier, only Birkiani has a majority Christian population today. There is also a small community of Kists in Kakheti (a region of Georgia bordering on the Gorge), mainly in the city of Telavi, who consider themselves Georgians and Orthodox Christians. As with most Georgians, Christian and Muslim alike, religion has as much a national meaning for many Kists as it does spiritual. Those who are Christian tend to identify themselves as Georgians.[7] 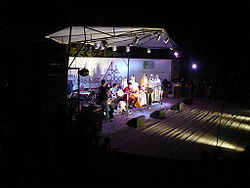 The Kist folk ensemble Pankisi at the Art-Gene festival in Tbilisi, 2008.

The Kists remained faithful to their family traditions and customs, refusing to assimilate with other north Caucasian nationalities such as the Chechens and Ingush. To this day, they identify themselves as Kists, and for official purposes declare themselves of Georgian nationality. They are typically bilingual in Chechen and Georgian.

The Kists represent the majority of the population in all Kist villages of the Pankisi Gorge, with the exception of a few Georgian families who came to this area later. In the Northern Caucasus, the Chechens and to a certain extent the Ingush officially registered father's names as family names. The Kists did not follow this practice. Instead, after migrating to Georgia, the Kists started adding the Georgian endings to their patrimonial names, particularly suffix -shvili (meaning "child" in Georgian), or sometimes suffix -dze (which means "son" in Georgian), or still other times the Georgian suffix -uli (indicating "belonging to" or "descended from"). In this manner, Kist family names were established.

A family's guest was treated with great respect. Men, usually the eldest man of the family, would greet the guest. The guest would then be seated in the most honorable place. The guest was not simply the guest of one particular family, but of the whole village and, in some cases, the whole canyon. Even today, this tradition is strictly maintained.