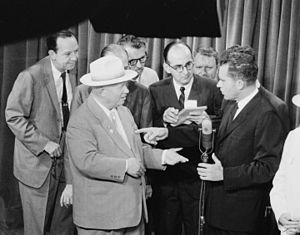 The Kitchen Debate was a series of impromptu exchanges (through interpreters) between then U.S. Vice President Richard Nixon and Soviet Premier Nikita Khrushchev at the opening of the American National Exhibition at Sokolniki Park in Moscow on July 24, 1959. For the exhibition, an entire house was built that the American exhibitors claimed anyone in America could afford. It was filled with labor-saving and recreational devices meant to represent the fruits of the capitalist American consumer market. The debate was recorded on color videotape and Nixon made reference to this fact; it was subsequently rebroadcast in both countries.

In 1959, the Soviets and Americans had agreed to hold exhibits in each other's countries as a cultural exchange to promote understanding. The Soviet exhibit in New York opened in June 1959, and the following month Vice President Nixon was on hand to open the US exhibit in Moscow. Nixon took Soviet Premier Nikita Khrushchev on a tour of the exhibit. As recounted by William Safire who was present as the exhibitor's press agent, the Kitchen debate took place in a number of locations at the exhibition but primarily in the kitchen of a suburban model house, cut in half for easy viewing.[1]

In the course of the tour Khrushchev surprised Nixon when he launched into a protest over a recent resolution that had passed the US Congress condemning the Soviet Union for its "control" over the "captive" peoples of Eastern Europe. The resolution called upon Americans to pray for those people. After protesting the actions of the US Congress, he dismissed the new technology of the US and declared that the Soviets would have all of the same things in a few years time, and then say to the US "Bye bye" as they passed by.[2] He satirically asked if there was a machine that "puts food into the mouth and pushes it down".[3] Nixon responded by saying at least the competition was technological, rather than military. Both men agreed that the United States and the Soviet Union should seek areas of agreement.[2] At the end, Khrushchev stated that everything he had said in their debate should be translated into English and broadcast in the US. Nixon responded "Certainly it will, and everything I say is to be translated into Russian and broadcast across the Soviet Union. That's a fair bargain." To this proposal, Khrushchev shook hands vigorously.[2]

Future Soviet Premier Leonid Brezhnev is reported to have been present and acting to obstruct the photo of the event by Safire.[4]

The Kitchen Debate was the first high-level meeting between Soviet and U.S. leaders since the Geneva Summit in 1955.

In the US, three major television networks broadcast the kitchen debate on July 25. The Soviets subsequently protested, as Nixon and Khrushchev had agreed that the debate should be broadcast simultaneously in America and the Soviet Union, with the Soviets threatening to withhold the tape until they were ready to broadcast. The American networks, however, had felt that delay would cause the news to lose its immediacy.[5] Two days later, on July 27, the debate was broadcast on Moscow television, albeit late at night and with Nixon's remarks only partially translated.[6]

American reaction was initially somewhat mixed, with The New York Times calling it "an exchange that emphasized the gulf between east and west but had little bearing on the substantive issue" and portrayed it somewhat as a political stunt.[7] The newspaper also declared that public opinion seemed divided after the debates.[8] On the other hand, Time, also covering the exhibition, praised Nixon, saying he "managed in a unique way to personify a national character proud of peaceful accomplishment, sure of its way of life, confident of its power under threat."[9]

Because of the informal nature of the exchange Nixon gained popularity, improving upon the lukewarm reception he previously had with the U.S. public.[10][11] He also impressed Mr. Khrushchev. Said reporter William Safire, present at the confrontation:

"The shrewd Khrushchev came away from his personal duel of words with Nixon persuaded that the advocate of capitalism was not just tough-minded but strong-willed."[1]

Khrushchev claimed that following his confrontation with Nixon he did all he could to bring about Nixon's defeat in his 1960 presidential campaign.[1] The trip raised Nixon's profile as a public statesman, greatly improving his chances for receiving the Republican presidential nomination the following year.[12]