Kitzbühel (German pronunciation: [ˈkɪtsbyːl]) is a small medieval town situated along the river Kitzbuhler Ache in Tyrol, Austria and the administrative centre of the Kitzbühel district (Bezirk). It has a population of 8,134 (as of 1 January 2013). The town is situated in the Kitzbühel Alps about 100 kilometres (62 mi) east of the state capital of Innsbruck. It is a ski resort of international renown.

Kitzbühel, situated on the Kitzbüheler Ache river, is a large valley town with most of its centre car-free, and with a large selection of up-market shops and cafes.[2]

The first known settlers were Illyrians mining copper in the hills around Kitzbühel between 1100 and 800 BC.

Around 15 BC, the Romans under Emperor Augustus extended their empire to include the Alps and established the province of Noricum. After the fall of the western Roman Empire, Bavarii settled in the Kitzbühel region around 800 and started clearing forests.

In the 12th century, the name Chizbuhel is mentioned for the first time in a document belonging to the Chiemsee monastery (where it refers to a "Marquard von Chizbuhel"), whereby Chizzo relates to a Bavarian clan and Bühel refers to the location of a settlement upon a hill. One hundred years later a source refers to the Vogtei of the Bamberg monastery in Kicemgespuchel and, in the 1271 document elevating the settlement to the status of a town, the place is called Chizzingenspuehel.

Kitzbühel became part of Upper Bavaria in 1255 when Bavaria was first partitioned. Duke Ludwig II of Bavaria granted Kitzbühel town rights on 6 June 1271, and it was fortified with defensive town walls. During the next centuries the town established itself as a market town, growing steadily and remaining unaffected by war and conflict. The town walls were eventually reduced to the level of a single storey building, and the stone used to build residential housing.

When Countess Margarete of Tyrol married the Bavarian, Duke Louis V the Brandenburger, in 1342, Kitzbühel was temporarily united with the County of Tyrol (that in turn became a Bavarian dominion as a result of the marriage until Louis' death). After the Peace of Schärding (1369) Kitzbühel was returned to Bavaria. Following the division of Bavaria, Kufstein went to the Landshut line of the House of Wittelsbach. During this time, silver and copper mining in Kitzbühel expanded steadily and comprehensive mining rights were issued to her that, later, were to become significant to the Bavarian dukedom. On 30 June 1504 Kitzbühel became a part of Tyrol permanently: the Emperor Maximilian reserved to himself the hitherto Landshut offices (Ämter) of Kitzbühel, Kufstein and Rattenberg as a part of his Cologne Arbitration (Kölner Schiedsspruch), that had ended the Landshut War of Succession.

However the law of Louis of Bavaria continued to apply to the three aforementioned places until the 19th century, so that these towns had a special legal status within Tyrol. Maximilian enfeoffed Kitzbühel, with the result that it came under the rule of the Counts of Lamberg at the end of the 16th century, until 1 May 1840, when Kitzbühel was ceremonially transferred to the state. An inscription in the Swedish Chapel dating to the Swedish War states "Bis hierher und nicht weiter kamen die schwedischen Reiter" ("The Swedish knights came as far as here but no further.")[3]

The wars of the 18th and 19th century bypassed the town, even though its inhabitants participated in the Tyrolean Rebellion against Napoleon. Following the Treaty of Pressburg in 1805, Kitzbühel once more became part of Bavaria; it was reunited with Tyrol after the fall of Napoleon at the Congress of Vienna. Until 1918, the town (named KITZBICHL before 1895) was part of the Austrian monarchy (Austria side after the compromise of 1867), head of the district of the same name, one of the 21 Bezirkshauptmannschaften in the Tyrol province.[4]

When Emperor Franz Joseph finally resolved the confusing constitutional situation, and following completion of the Salzburg-Tyrol Railway in 1875, the town's trade and industry flourished. In 1894, Kitzbühel hosted its first ski race, ushering in a new era of tourism and sport.[5]

Kitzbühel also had the good fortune to remain undamaged from the ravages of the First and Second World Wars.[6] Since the year 2000 the town has been a member of the Climate Alliance of Tyrol.

The town's demographic evolution between 1869 and 2011 is shown in the list to the right.

Kitzbühel is one of Austria's best-known and fanciest winter sports resorts, situated between the mountains Hahnenkamm (5616 ft, 1712 m) and Kitzbühler Horn (6548 ft, 1996 m). The Hahnenkamm is home of the annual World Cup ski races, including the circuit's most important event, the downhill race on the famous Streif slope. This downhill is counted as one of the toughest downhill competitions in the World Cup, and is infamous for having a lot of crashes.

The Kitzbüheler Alpenrallye is an annual festival of historic automobiles. It was first held in 1988. The first trip of the United Buddy Bears was 2004 to Kitzbühel, following by the first trip into the "big wide world" – when they went to Hong Kong and many other metropolises on all five continents. 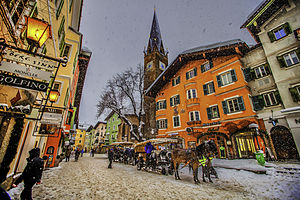 Together with the pistes and ski lifts in neighbouring Kirchberg in Tirol, Jochberg and by the Thurn Pass Kitzbühel is one of the largest ski regions in Austria. With around 10,000 hotel and guest house beds, Kitzbühel and its neighbours have an unusually high density of guest accommodation.

Holidaymakers in Kitzbühel have 56 cableway and lift facilities and 168 kilometres of slopes available to them, as well as 40 kilometres of groomed cross-country skiing tracks. Of note is the relatively new 3S Cable Car, the cable car with the highest above-ground span in the world.

Other attractions include six tennis courts and four golf courses, the Kitzbühel swimming pool, Austria's only curling hall and the bathing lake of Schwarzsee.

Kitzbühel also caters for the high end of the tourist market, as many celebrities and the jet set come here for the international races on the Hahnenkamm.

Together with eleven other towns Kitzbühel is a member of the community Best of the Alps.[8]

An International Polkafest was held in Kitzbühel in 1978.[9]

The Brixental Road, the B170, from Wörgl intersects in Kitzbühel with the Thurn Pass Road, the B161, from Mittersill to St. Johann in Tirol. Kitzbühel station is a major bus stop for buses to Lienz and Worgl.

Kitzbühel Hauptbahnhof, Kitzbühel Hahnenkamm and Kitzbühel Schwarzsee are stops on the Salzburg-Tyrol Railway. Whilst Hahnenkamm and Schwarzsee stations are served by local trains only, long-distance services from Innsbruck and Graz stop at Kitzbühel station. Kitzbühel station has just been rebuilt (2010) and been equipped with new barrier-less platforms with underpasses and a lift. From 2011 there will be no stationmaster at Kitzbühel and it will no longer be possible to buy tickets at the counter.

Kitzbühel is twinned with:[10]