From Infogalactic: the planetary knowledge core
Jump to: navigation, search
For other uses, see Kiva (disambiguation). 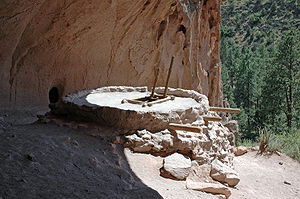 Interior of a reconstructed kiva at Mesa Verde National Park. 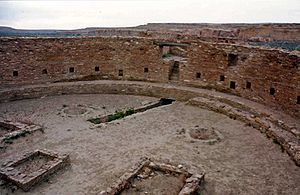 Ruins of a great kiva at Chaco Canyon. 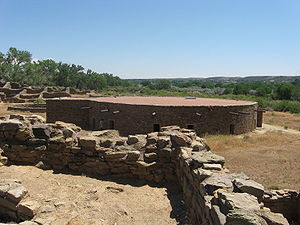 The Great Kiva at Aztec Ruins National Monument was excavated by Earl Morris in 1921 and reconstructed by him 13 years later. 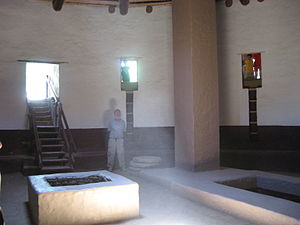 Interior of Great Kiva at Aztec Ruins National Monument shows the vast size of the structure.

A kiva is a room used by Puebloans for religious rituals, many of them associated with the kachina belief system. Among the modern Hopi and most other Pueblo peoples, kivas are square walled and underground, and are used for spiritual ceremonies.

Similar subterranean rooms are found among ruins in the American southwest, indicating uses by the ancient peoples of the region including the Ancestral Puebloans, the Mogollon and the Hohokam.[1] Those used by the ancient Pueblos of the Pueblo I Era and following, designated by the Pecos Classification system developed by archaeologists, were usually round and evolved from simpler pithouses. For the Ancestral Puebloans, these rooms are believed to have had a variety of functions, including domestic residence along with social and ceremonial purposes.[2]

Evolution of the kiva

During the late 8th century, Mesa Verdeans started building square pit structures that archeologists call protokivas. They were typically 3 or 4 feet (0.91 or 1.22 m) deep and 12 to 20 feet (3.7 to 6.1 m) in diameter. By the mid-10th and early 11th centuries, these had evolved into smaller circular structures called kivas, which were usually 12 to 15 feet (3.7 to 4.6 m) across. Mesa Verde-style kivas included a feature from earlier times called a sipapu, which is a hole dug in the north of the chamber that is thought to represent the Ancestral Puebloan's place of emergence from the underworld.[3][4]

When designating an ancient room as a kiva, archaeologists make assumptions about the room's original functions and how those functions may be similar to or differ from kivas used in modern practice. The kachina belief system appears to have emerged in the Southwest at approximately AD 1250, while kiva-like structures occurred much earlier. This suggests that the room's older functions may have been changed or adapted to suit the new religious practice.

As cultural changes occurred, particularly during the Pueblo III period between 1150 and 1300, kivas continued to have a prominent place in the community. However, some kivas were built above ground. Kiva architecture became more elaborate, with tower kivas and great kivas incorporating specialized floor features. For example, kivas found in Mesa Verde were generally keyhole-shaped. In most larger communities, it was normal to find one kiva for each five or six rooms. Kiva destruction, primarily by burning, has been seen as a strong archaeological indicator of conflict and warfare among people of the southwest during this period.

"...purpose is unclear.... Each had an exterior doorway to the plaza.... Four massive pillars of alternating masonry and horizontal poles held up the ceiling beams, which in turn supported an estimated ninety-five-ton roof. Each pillar rested on four shaped stone disks, weighing about 355 pounds [161 kg] apiece. These discs are of limestone, which came from mountains at least forty miles away."[5]

After 1325 or 1350, except in the Hopi and Pueblo region, the ratio changed from 60 to 90 rooms for each kiva. This may indicate a religious or organizational change within the society, perhaps affecting the status and number of clans among the Pueblo people. The use of the kiva was for men and boys only.[citation needed] 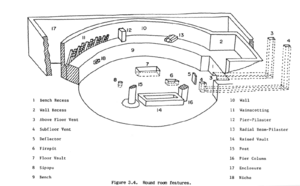