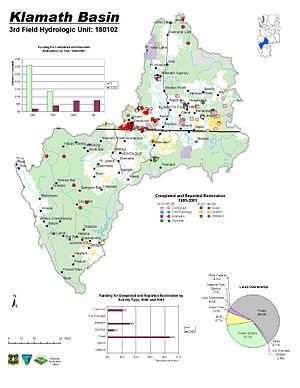 The Klamath Basin is the region in the U.S. states of Oregon and California drained by the Klamath River. It contains most of Klamath County and parts of Lake and Jackson counties in Oregon, and parts of Del Norte, Humboldt, Modoc, Siskiyou, and Trinity counties in California. The 15,751-square-mile (40,790 km2) drainage basin is 35% in Oregon and 65% in California. In Oregon, the watershed typically lies east of the Cascade Range, while California contains most of the river's segment that passes through the mountains. In the Oregon-far northern California segment of the river, the watershed is semi-desert at lower elevations and dry alpine in the upper elevations. In the western part of the basin, in California, however, the climate is more of temperate rainforest, and the Trinity River watershed consists of a more typical alpine climate. 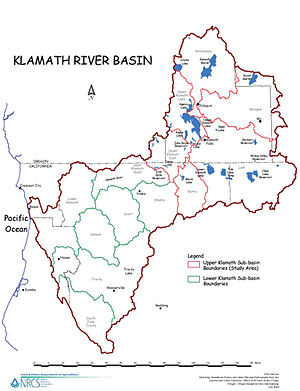 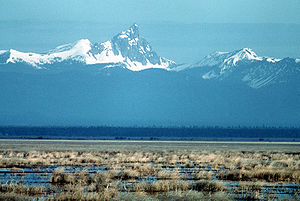 The Upper Klamath Basin today, showing the remnants of the vast Lake Modoc

Upper Klamath Lake is the largest present-day body of water in the Klamath River watershed, covering 96 square miles (250 km2) on average, with a shoreline of 87 miles (140 km). It is also the largest freshwater lake in the state of Oregon.[4] Historically, Lower Klamath Lake and Tule Lake were one interconnected freshwater marsh that totaled 195 square miles (510 km2) - more than twice the present-day dimensions of Upper Klamath Lake, and larger than Lake Tahoe in central California. This interconnected wetland still supports up to 3.7 million migrating birds per year.[5] In wet years, the two lakes would connect to Upper Klamath Lake, forming one huge body of water. These lakes occupy the basin that was prehistorically occupied by Lake Modoc, a 1,100-square-mile (2,800 km2) freshwater lake that covered the entire Upper Klamath Basin, or 7% of the watershed - an area three times larger than the massive Salton Sea in southern California. This lake existed up to 11,000 years ago at the end of the most recent ice age.[6] Today, Upper Klamath Lake encompasses just 0.6% of the Klamath watershed.

Trinity Lake, on the mainstem of the Trinity River, is the largest tributary reservoir in the Klamath River watershed. At 25 square miles (65 km2) in size, it is larger than all four mainstem Klamath reservoirs combined (excluding Upper Klamath Lake).[12] 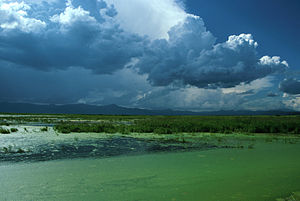 Landscape of the basin

These three rivers are located above (north) of the Klamath Lake basin:

These features are inside or near the Klamath Lake basin:

These are the major downstream tributaries of the Klamath River:

Communities in the Klamath Basin include: