Klamath National Forest is a 1,737,774-acre (2,715 sq mi; 7,033 km2) national forest, in the Klamath Mountains, located in Siskiyou County in northern California, but with a tiny extension (1.5 percent of the forest) into southern Jackson County in Oregon.[1] The forest contains continuous stands of ponderosa pine, Jeffrey pine, Douglas fir, red fir, white fir and incense cedar. Old growth forest is estimated to cover some 168,000 acres (680 km2) of the forest land.[2] Forest headquarters are located in Yreka, California. There are local ranger district offices located in Fort Jones, Happy Camp, and Macdoel, all in California. Klamath was established on May 6, 1905.[3] This park includes the Kangaroo Lake.

There are four officially designated wilderness areas in Klamath National Forest that are part of the National Wilderness Preservation System. Two of them extend into neighboring national forests, and one of those into land managed by the Bureau of Land Management. 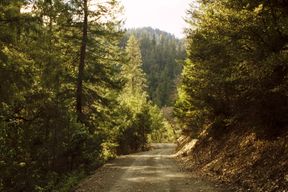