From Infogalactic: the planetary knowledge core
(Redirected from Klamath Reclamation Project)
Jump to: navigation, search
Not to be confused with Klamath Diversion.

The Klamath Project was developed by the United States Bureau of Reclamation to supply farmers with irrigation water and farmland in the Klamath Basin.

The two main sources supply water for the project are Upper Klamath Lake and the Klamath River. The main bodies of water in the Klamath Project are Clear Lake Reservoir, Klamath River, Link River, Lost River, Lower Klamath Lake, Tule Lake, and Upper Klamath Lake. The project fills these reservoirs from the spring runoff, peaking generally in March and April, and keeps the runoff from flooding the historical marshes that are a large portion of the present farmland. There are also many minor streams in the area. 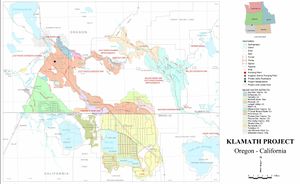 225,000 acres (91,000 ha) of rangeland have been transformed into active farmland through the Klamath Project. 80,000 acres (32,000 ha) of this transformed land were under Lower Klamath Lake, a shallow marsh straddling the Oregon-California border between the California towns of Dorris and Tulelake. Tule Lake was also reduced in size by diverting water from Lost River to the Klamath River.

Farmers in the project raise barley, alfalfa hay, and other hay, oats, potatoes, and wheat.

A contract executed February 24, 1917, between the California-Oregon Power Company (now Pacific Power) and the United States authorized the company to construct the Link River Dam for the benefit of the project and for the company's use, and in particular extended to the water users of the Klamath Project certain preferential power rates. The dam was completed in 1921.

In more recent times, the Klamath Project has been the focus of nationwide controversy. The Lost River and Shortnose suckers were listed as endangered in 1988. This, as well as concerns for salmon runs, led to a cutoff of irrigation water to local farmers on April 6, 2001. After many protests by farmers and concerned citizens alike, the decision was reversed the next year.

A massive die off of salmon occurred in 2002 due to low water and high temperatures in the lower reaches of the river during the salmon migration. Studies showed that drought conditions and low flow from the entire drainage were among the factors that caused a unique mix of conditions to allow a gill rot disease to attack the salmon population.[1]

The conflict in balancing the economic and ecological concerns of the region was the focus of the 2006 book River of Renewal: Myth and History in the Klamath Basin.[2] Today, there is still much antagonism between opposing sides on this issue.[3]

The Klamath Project contains seven dams. These vary from simple earthfill structures to concrete structures several hundred feet high. Three of the seven dams are storage dams, retaining water behind them to be used later. These are the Clear Lake Dam; the Gerber Dam, with Gerber Reservoir; and the Link River Dam, with Upper Klamath Lake as its reservoir.

In addition to the storage dams, there are four diversion dams. The Lost River, Anderson-Rose, and the Malone diversion dams are all located on the Lost River. The Miller Diversion Dam is on Miller Creek, 8 miles (13 km) below Gerber Dam.

There are over 717 miles (1,154 km) of canals, laterals and diversion channels in the Klamath Project. The canals transport irrigation water from Klamath Lake and the Klamath River, Clear Lake and the Lost River, and Tule Lake. There are two tunnels: the "A" Canal (the main canal that starts just above the Link River Dam) has an underground section as it flows through Klamath Falls, and the Tule Lake Tunnel.

There are almost 728 miles (1,172 km) of drainage canals in the Klamath Project which allow land that would otherwise be wetlands to be farmed. The Lower Klamath Lake was 80,000 acres (32,000 ha) before it was drained and would naturally evaporate about 240,000 acre feet (300,000,000 m3) each summer. This is roughly equivalent to the annual delivery of the A canal.

The idea behind the document originally stemmed from the 2001 irrigation water shutoff to Klamath Project farmers, when water was withheld from the irrigators in favor of the threatened Coho salmon and the endangered Lost River Sucker.[4] Downstream populations of Coho salmon are within the Southern Oregon/Northern California Evolutionary Significant Unit and are listed as threatened (2011).[5]