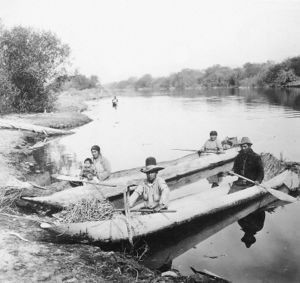 Prior to the arrival of European explorers, the Klamath people lived in the area around the Upper Klamath Lake and the Klamath, Williamson, and Sprague rivers. They subsisted primarily on fish and gathered roots and seeds.

The Klamath were known to raid neighboring tribes (such as the Achomawi on the Pit River), and occasionally to take prisoners as slaves. They traded with the Chinook people at The Dalles.

In 1826, Peter Skene Ogden, an explorer for the Hudson's Bay Company, first encountered the Klamath people, and he was trading with them by 1829. The United States frontiersman Kit Carson admired their arrows, which were reported to be able to shoot through a house.

Treaty with the United States

Since termination of recognition of their tribal sovereignty in 1954 (with federal payments not disbursed until 1961), the Klamath and neighboring tribes have reorganized their government and revived tribal identity. The Klamath, along with the Modoc and Yahooskin, have formed the federally recognized Klamath Tribes confederation. Their tribal government is based in Chiloquin, Oregon.

Some Klamath live on the Quartz Valley Indian Community in Siskiyou County, California.

A fictionalized account of historical events surrounding the 1961 tribal termination can be found in the 2005 Rick Steber novel Buy the Chief a Cadillac,[2] winner of the 2005 Spur Award.

The Klamath use Apocynum cannabinum as a fiber.[3] They also consume the roots of Lomatium canbyi for food.[4]

The Klamath people are grouped with the Plateau Indians—the peoples who originally lived on the Columbia River Plateau. They were most closely linked with the Modoc people.