As Foreign Minister, Kinkel took a clear stance to end the atrocities committed during the Yugoslav wars of the 1990s, and proposed the creation of the International Criminal Tribunal for the former Yugoslavia.[1]

The son of a doctor, Kinkel was born in Metzingen, Baden-Württemberg, into a Catholic family. He took his Abitur at the Staatliches Gymnasium Hechingen and studied law at the universities of Tübingen, Bonn and Cologne. He joined A.V. Guestfalia Tübingen, a Catholic student fraternity that is member of the Cartellverband. Kinkel took his first juristic state exam at Tübingen, the second in Stuttgart and earned a doctorate of law in 1964.

Career as a civil servant

Kinkel was first employed as a civil servant in the state of Baden-Württemberg, until he was employed at the Federal Ministry of the Interior in 1968. There, he was personal secretary for the Federal Minister, Hans-Dietrich Genscher, from 1970 to 1974, and eventually the head of the Minister's bureau. After Genscher was appointed Foreign Minister in 1974, Kinkel held senior positions in the Federal Foreign Office, as head of the Leitungsstab and the policy planning staff (Planungsstab).

President of the Federal Intelligence Service

From 1979 to 1982 he was president of the Federal Intelligence Service.

From 1982 to 1991, Kinkel was secretary of state in the Federal Ministry of Justice. 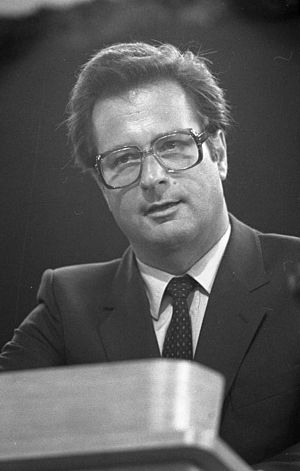 Kinkel as President of the Federal Intelligence Service in 1981, during a visit to President Karl Carstens

Kinkel was Federal Minister of Justice from 18 January 1991 to 18 May 1992. Among other achievements, he took the lead in pressing for the return of Erich Honecker, the former East German leader, to face trial. He also engaged in public negotiations with the terrorist Red Army Faction, successfully urging them to renounce violence.[2][3]

In a surprise decision on 29 April 1992, the members of the FDP parliamentary group rejected the nomination of Germany's designated new Foreign Minister, Irmgard Schwaetzer, and voted instead to name Kinkel to head the Federal Foreign Office.[4]

During his tenure as Foreign Minister, Kinkel made substantial efforts to end the atrocities committed by Serbs in the Yugoslav Wars.[citation needed] In 1992, he proposed the creation of the International Criminal Tribunal for the former Yugoslavia[citation needed] and – unsuccessfully –introduced a resolution at a meeting of European Community foreign ministers that would have committed each of the member countries to accept more refugees from the Balkans.[5] Later that year, he announced Germany's wish for a permanent seat on the United Nations Security Council, arguing that Britain and France would never agree to an alternative plan under which they would merge their national seats into a single permanent seat representing the European Union.[6]

Under the leadership of Chancellor Helmut Kohl and Kinkel, the German Bundestag in 1993 agreed on a three-point amendment to the 1949 Constitution that for the first time let German troops take part in international peacekeeping operations sanctioned by the United Nations and other bodies, subject to advance approval by parliament.[7] Shortly after, the German Parliament approved a controversial troop deployment under the umbrella of the United Nations Operation in Somalia II, clearing the final hurdle for what was then Germany's biggest deployment of ground forces abroad since World War II.[8] Also under Kinkel’s leadership, Germany began destroying stockpiles of tanks and other heavy weapons in the early 1990s, becoming the first country to implement the Treaty on Conventional Armed Forces in Europe.[9]

A strong supporter of European integration, Kinkel successfully advocated for Germany to ratify the Maastricht Treaty on European political and economic union in December 1992, making it the 10th of the 12 European Community nations to sign on.[12] In 1994, he had to abandon his candidate for President of the European Commission, Prime Minister Jean-Luc Dehaene of Belgium, following protest by British Prime Minister John Major.[13] In 1997, he argued that Turkey did not qualify because of its record on "human rights, the Kurdish question, relations with Greece and of course very clear economic questions."[14] On Kinkel’s initiative, Germany became the first government to declare a suspension of contacts with Bosnia's envoys abroad after a recommendation made by the High Representative of the International Community in Bosnia-Herzegovina, Carlos Westendorp.[15]

From 21 January 1993, Kinkel was also Vice-Chancellor of Germany. From 1993 to 1995 he also served as chairman of the FDP. After the Free Democrats won barely enough votes to get into the Bundestag in 1994[16] and later lost badly in 12 out of 14 state and European Parliament elections, Kinkel announced that he would not seek re-election as party chairman. He resigned as Foreign Minister and Vice-Chancellor after the government's defeat in the 1998 federal election.[citation needed]

Kinkel was a member of the Bundestag, the Parliament of Germany, from 1994 to 2002. From 1998 to 2002, he served as deputy chairman of the FDP parliamentary group. Kinkel was elected from the state of Baden-Württemberg.

After leaving government in 1998, Kinkel has worked as a lawyer and been engaged in a number of philanthropic activities. From 2002, he served on the European Advisory Council of Lehman Brothers. He currently is Chairman of the Executive Board at Deutsche Telekom Foundation.