The Blessed Hieromartyr Clement Sheptytsky, M.S.U. (Ukrainian: Климентій Шептицький; 17 November, 1869 – 1 May, 1951), was an archimandrite of the Order of Studite monks of the Ukrainian Greek Catholic Church. Klymentiy has been beatified by the Catholic Church, as well as awarded the title of Righteous Among the Nations by the State of Israel for saving Jews.[1][2] As effective leader of the Church, he was arrested and died a prisoner of the Soviet Union.

Sheptytsky was born on 17 November 1869 in the village of Prylbychi, near Lviv[3] in Galicia to an old Polish-Ruthenian noble family. The Szeptycki family lived in the eastern part of Poland, near Zamosc, in Labunie's Palace. At that time, the area was of the Austro-Hungarian Empire. He was a younger brother of the future Servant of God, Metropolitan Bishop Andrew Sheptytsky, and received his education first at home and starting in 1882 at Krakow. Sheptytsky later also studied in Munich and Paris. In 1892 he became a doctor of law at the Jagiellonian University. After finishing his studies he returned home to manage the family estates and look after his aging parents. In 1900 Casimir Sheptytsky was elected to the Austrian parliament however after its dissolution in 1907 he decided to withdraw from politics.

In 1911 Sheptytsky decided to become a monk and entered the Benedictine (Latin Rite) monastery in Beuron (Baden-Württemberg), Germany. After a year he decided to follow the example of his older brother, returning to the Ukrainian Greek Catholic Church of their ancestors and entered the St. Theodore the Studite Monastery of St. Theodore in Bosnia.[3] He took the religious name of Clement, after Pope Saint Clement I, martyred in Chersonesos, who together with St Andrew the First-Called is considered to be the founder of Christianity in the Balkans. On 28 August 1913 he was ordained a priest by the Bishop of Križevci, Croatia. That same year he undertook theological studies in Innsbruck[3] and after finishing them in 1919 returned to Ukraine to settle in the Holy Dormition Lavra in Peremyshliany Raion.

In 1926 Father Clement was named the hegumen (prior) of the Univ Lavra. In 1937 he came to Lvov to aide his ailing brother Andrew. In 1939 the region was occupied by communists, the Soviet "liberators" immediately implemented a plan to eliminate the Ukrainian intellectual elites and Church. At the time they did not arrest the Metropolitan himself, fearing his great authority among the nation, but went after his family attempting to capture Clement and murdering their brother Leon along with his family. During that time the Metropolitan divided the Soviet union into four exarchates and named Father Clement the exarch of Russia.[citation needed] 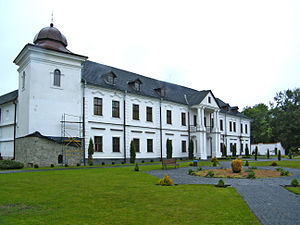 In 1941 the persecution of Christians was interrupted with the outbreak of the Nazi-Soviet war and the German occupation of Ukraine, however the situation did not improve much. During that time father Clement helped his brother rescue Jews, harboring them in Studite monasteries and organizing groups that would aid them in escaping to Hungarian controlled Transcarpathian Ukraine.

From 1941 to 1944, when the region was occupied by Nazi Germany, Jewish boys were hidden at the monastery in Univ, home to monks of the Ukrainian Greek Catholic Church. Univ was particularly important because it was the main Studite monastery; with its large community of monks, younger boys would go unnoticed by authorities. Along with the handful of holy men who were the children’s daily caretakers, three figures were instrumental in their safekeeping: Metropolitan Andrey Sheptytsky, the head of the Ukrainian Greek Catholic Church, his brother Klymentiy, and Omelyan Kovch, a priest from the nearby town of Peremyshliany. Kurt I. Lewin, whose father was Lviv’s last rabbi and who would later become a renowned businessman, and David Kahane, later chief rabbi in the Israeli Air Force, were both harbored by Sheptytsky in Lviv. Later in their lives, both men would write about their experiences, Lewin in “A Journey Through Illusions” and Kahane in the “Lvov Ghetto Diary.”[1]

Clement Sheptytsky was recognized as one of the Righteous among the Nations by the State of Israel in 1995.

With the return of the Soviets in 1944 a coordinated action to destroy the Church and subject it to the Moscow Patriarchate was implemented. After the death of the Metropolitan, his successor, Joseph Slipyj, named Father Clement the Archimandrite of the Studite Order. This meant that at the time of the mass arrest of Church hierarchs carried out by the NKVD in 1945 he was one of the highest ranking clergymen left. As such he became an informal leader of the Church, meeting with monks and priests and strengthening them in their resolve. On 5 June 1947 he himself was arrested by Soviet authorities and held, first in an NKVD prison in Lviv, then in Kiev, and finally, after his steadfast refusal to renounce his faith and serve the Moscow Patriarchate, sentenced to eight years imprisonment. Ivan Kryvytskyi remembered Father Klymentiy as tall, rather thin, with a long white beard, a little stooped, with a cane. Arms relaxed, calm, face and eyes friendly. "He reminded me of Saint Nicholas … We never expected such a rascal in our room … Some sisters had passed three apples to him, real rosy red and ripe. And he gave one apple to Roman Novosad, who often had stomach problems. He said: 'You need to take care of your stomach,' and the others he divided among us."[4] He died on May 1, 1951 in Vladimir Central Prison.

Sheptytsky was beatified on 27 June 2001 by the Pope Saint John Paul II in Lviv, during his apostolic journey to Ukraine, together with 27 other members of the Ukrainian Catholic Church previously declared Venerable.

On July 29, 2011, a monument to Andrey and Klymentiy Sheptytsky was unveiled in their home village of Prylbychi.[5]

We have always wanted to plunge more deeply into the legacy of previous generations of ethnic Ukrainians and Jews who lived on historically Ukrainian lands. This legacy knows not only pain and injustice, but also the experience of tolerant co-existence and mutual assistance. In order to guarantee a humane outline for the future, we must not forget the former and actively the experience the latter. For example, the spiritual inheritance of the Sheptytsky brothers alone, Andrey and Klymentiy, is sufficient to reveal to the contemporary person all the beauty of the love of humanity.[6]