Knyaz or knez is a historical Slavic title, used both as a royal and noble title, usually translated into English either as Prince or less commonly as Duke, and in Latin sources as comes or princeps, but the word was originally derived from the Proto-Germanic kuningaz (king).[1]

The title is pronounced and written similarly in different European languages. In Croatian, Bosnian and West Slavic languages, such as Polish, the word has later come to denote "lord", and in Czech, Polish and Slovak also came to mean "priest" (kněz, ksiądz, kňaz) as well as "duke" (knez, kníže, książę, knieža).[3] In Sorbian it means simply "Mister". Today the term knez is still used as the most common translation of "prince" in Bosnian, Croatian and Serbian literature. "Knez" is also found as a surname in former Yugoslavia.[4] 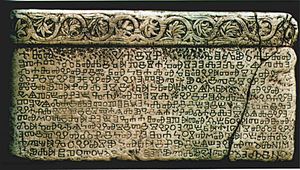 The title knez appeared in the early 12th-century Glagolitic Baška tablet inscription, found on the island of Krk, Croatia.

In Finnish knyaz is translated more like the word ruhtinas ("Sovereign Prince"). Ruhtinas comes from Proto-Germanic word druhtinaz, what can be translated as "warlord". In Finland tsar was officially called as suuriruhtinas after the Grand Principality of Finland. Suuriruhtinas in English means "grand prince", in Russian velikiy knyaz.

The meaning of the term changed over the course of history. Initially the term was used to denote the chieftain of a tribe. Later, with the development of feudal statehood, it became the title of a ruler of a state, and among East Slavs (Russian: княжество (kniazhestvo), Ukrainian: князівство (kniazivstvo) traditionally translated as duchy or principality), for example, of Kievan Rus'. In medieval Latin sources the title was rendered as either rex or dux.

In Bulgaria, Simeon took the title of tsar in 913. In Kievan Rus', as the degree of centralization grew, the ruler acquired the title Velikii Kniaz (Великий Князь) (translated as Grand Prince or Grand duke, see Russian Grand Dukes). He ruled a Velikoe Knyazhestvo (Великое Княжество) (Grand Duchy), while a ruler of its vassal constituent (udel, udelnoe kniazhestvo or volost) was called udelny kniaz or simply kniaz.

When Kievan Rus' became fragmented in the 13th century, the title Kniaz continued to be used in East Slavic states, including Kiev, Chernigov, Novgorod, Pereiaslav, Vladimir-Suzdal', Muscovy, Tver, Halych-Volynia, and in the Grand Duchy of Lithuania.[8] 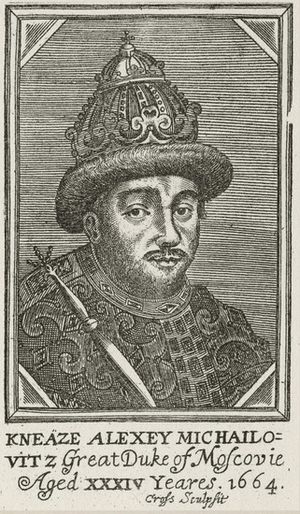 As the Tsardom of Russia gained dominion over much of former Kievan Rus', Velikii Kniaz (Great Kniaz) Ivan IV of Russia in 1547 was crowned as Tsar. From the mid-18th century onwards, the title Velikii Kniaz was revived to refer to (male-line) sons and grandsons of Russian Emperors. See titles for Tsar's family for details.

Kniaz (Russian: Кня́зь, IPA: [ˈknʲæsʲ]) continued as a hereditary title of Russian nobility patrilineally descended from Rurik (e.g., Belozersky, Belosselsky-Belozersky, Repnin, Gorchakov) or Gediminas (e.g., Galitzine, Troubetzkoy). Members of Rurikid or Gedyminid families were called princes when they ruled tiny quasi-sovereign medieval principalities. After their demesnes were absorbed by Muscovy, they settled at the Moscow court and were authorised to continue with their princely titles.

From the 18th century onwards, the title was occasionally granted by the Tsar, for the first time by Peter the Great to his associate Alexander Menshikov, and then by Catherine the Great to her lover Grigory Potemkin. After 1801, with the incorporation of Georgia into the Russian Empire, various titles of numerous local nobles were controversially rendered in Russian as "kniazes". Similarly, many petty Tatar nobles asserted their right to style themselves "kniazes" because they descended from Genghis Khan.

In the 19th century, the Serbian term knez (кнез) and the Bulgarian term knyaz (княз) were revived to denote semi-independent rulers of those countries, such as Alexander Karađorđević and Alexander of Battenberg. Prior to Battenberg, the title knyaz was born by Simeon I during the First Bulgarian Empire (9th-10th century). At the height of his power, Simeon adopted the title of tsar ("emperor"), as did the Bulgarian rulers after the country became officially independent in 1908.[citation needed]

As of Bulgaria's independence in 1908, Knyaz Ferdinand became Tsar Ferdinand, and the words knyaz/knyaginya began to be used instead for the tsar's children – the heir to the throne, for example, held the title Knyaz Tarnovski ("Knyaz of Tarnovo").[citation needed]

In parts of Serbia and western Bulgaria, knez was the informal title of the elder or mayor of a village or zadruga until around the 19th century. Those are officially called градоначелник (gradonačelnik) (Serbia) and градоначалник (gradonachalnik) or кмет (kmet) (Bulgaria).[citation needed]