From Infogalactic: the planetary knowledge core
Jump to: navigation, search
Not to be confused with Mir mine, a large open-pit diamond mine in Russia. 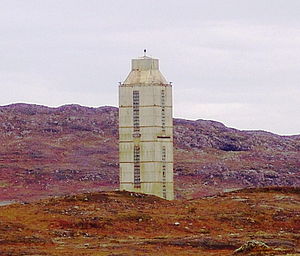 The Kola Superdeep Borehole (Russian: Кольская сверхглубокая скважина, Kolskaya sverkhglubokaya skvazhina) is the result of a scientific drilling project of the Soviet Union in the Pechengsky District, on the Kola Peninsula, longitude and latitude coordinate: Lua error in Module:Coordinates at line 668: callParserFunction: function "#coordinates" was not found. . The project attempted to drill as deep as possible into the Earth's crust. Drilling began on 24 May 1970 using the Uralmash-4E, and later the Uralmash-15000 series drilling rig. A number of boreholes were drilled by branching from a central hole. The deepest, SG-3, reached 12,262-metre-long (40,230 ft) in 1989 and still is the deepest artificial point on Earth.[1] 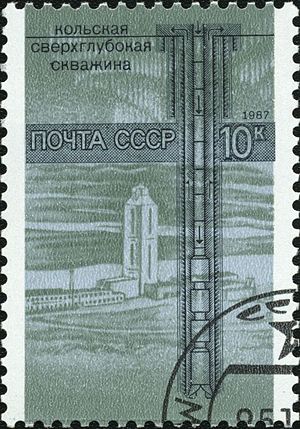 The Kola borehole penetrated about a third of the way through the Baltic continental crust, estimated to be around 35 kilometres (22 mi) deep, reaching rocks of Archaean age (greater than 2.5 billion years old) at the bottom.[7] The project has been a site of extensive geophysical studies. The stated areas of study were the deep structure of the Baltic Shield; seismic discontinuities and the thermal regime in the Earth's crust; the physical and chemical composition of the deep crust and the transition from upper to lower crust; lithospheric geophysics; and to create and develop technologies for deep geophysical study.

To scientists, one of the more fascinating findings to emerge from this well is that no transition from granite to basalt was found at the depth of about 7 km, where the velocity of seismic waves has a discontinuity. Instead the change in the seismic wave velocity is caused by a metamorphic transition in the granite rock. In addition, the rock at that depth had been thoroughly fractured and was saturated with water, which was surprising. This water, unlike surface water, must have come from deep-crust minerals and had been unable to reach the surface because of a layer of impermeable rock.[8]

Another unexpected discovery was a large quantity of hydrogen gas; the mud that flowed out of the hole was described as "boiling" with hydrogen.[9] 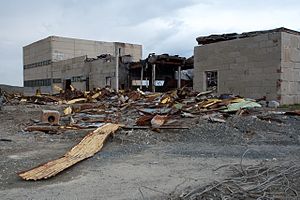 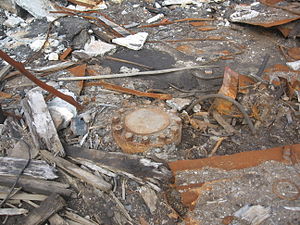 The borehole itself (welded shut), August 2012

The project was closed down in late 2006 because of a lack of funding. All the drilling and research equipment was scrapped. The site has been abandoned since 2008.[10]

On 28 January 2011, Exxon Neftegas Ltd., operator of the Sakhalin-I project, drilled the world's longest extended-reach well offshore on the Russian island of Sakhalin. It has surpassed the length of both the Al Shaheen well and the Kola borehole. The Odoptu OP-11 well reached a measured total depth of 12,345 m (40,502 ft) and a horizontal displacement of 11,475 m (37,648 ft). Exxon Neftegas completed the well in 60 days.[2]

In terms of depth below the surface, the Kola Superdeep Borehole retains the world record.