listen), Ukrainian: колгосп, kolhosp, Russian plural kolkhozy, anglicized plural kolkhozes) was a form of collective farm in the Soviet Union. Kolkhozes existed along with state farms or sovkhoz (plural sovkhozy or sovkhozes). These were the two components of the socialized farm sector that began to emerge in Soviet agriculture after the October Revolution of 1917, as an antithesis both to the feudal structure of impoverished serfdom and aristocratic landlords and to individual or family farming.

The 1920s were characterized by spontaneous emergence of collective farms, under influence of traveling propaganda workers. Initially a collective farm resembled an updated version of the traditional Russian “commune”, the generic “farming association” (zemledel’cheskaya artel’), the association for joint cultivation of land (TOZ), and finally the kolkhoz. This gradual shift to collective farming in the first 15 years after the October Revolution was turned into a "violent stampede" during the forced collectivization campaign that began in 1928.

As a collective farm, a kolkhoz was legally organized as a production cooperative. The Standard Charter of a kolkhoz, which since the early 1930s had the force of law in the USSR, is a model of cooperative principles in print. It speaks of the kolkhoz as a “form of agricultural production cooperative of peasants that voluntarily unite for the purpose of joint agricultural production based on ... collective labor.” It asserts that “the kolkhoz is managed according to the principles of socialist self-management, democracy, and openness, with active participation of the members in decisions concerning all aspects of internal life”.[1]

In practice, the collective farm that emerged after Stalin’s collectivization campaign did not have many characteristics of a true cooperative, except for nominal joint ownership of non-land assets by the members (the land in the Soviet Union was nationalized in 1917). Importantly, remuneration had always been in proportion to labor and not from residual profits, implying that members were treated as employees and not as owners. Even the basic principle of voluntary membership was violated by the process of forced collectivization; members did not retain a right of free exit, and those who managed to leave could not take their share of assets with them (neither in kind nor in cash-equivalent form). The role of the “sovereign” general assembly and the “democratically elected” management was in practice reduced to rubber-stamping the plans, targets, and decisions made by the district and provincial authorities.

They imposed detailed work programs and nominated their preferred managerial candidates.[2][3] Since the mid-1930s, the kolkhozes had been in effect an offshoot of the state sector (although notionally they continued to be owned by their members). Nevertheless, in locations with particularly good land or if it happened to have capable management, some kolkhozes accumulated substantial sums of money in their bank accounts. Subsequently, numerous kolkhozes were formally nationalized by changing their status to sovkhozes. The faint dividing lines between collective and state farms were obliterated almost totally in the late 1960s, when Khrushchev’s administration authorized a guaranteed wage to kolkhoz members, similarly to sovkhoz employees. Essentially, his administration recognized their status as hired hands rather than authentic cooperative members. The guaranteed wage provision was incorporated in the 1969 version of the Standard Charter.

The question of internal organization was important in the new kolkhozes. The most basic measure was to divide the workforce into a number of groups, generally known as brigades, for working purposes. By July 1929 it was already normal practice for the large kolkhoz of 200-400 households to be divided into temporary or permanent work units of 15-30 households.'[4] The authorities gradually came down in favour of the fixed, combined brigade, that is the brigade with its personnel, land, equipment and draught horses fixed to it for the whole period of agricultural operations, and taking responsibility for all relevant tasks during that period. The brigade was headed by a brigade leader (brigadir). This was usually a local man (a few were women).

After the kolkhoz amalgamations of 1950 the territorial successor of the old village kolkhoz was the "complex brigade" (brigade of brigades), a sub-unit of the new enlarged kolkhoz.

Brigades could be subdivided into smaller units called zvenos (links) for carrying out some or all of their tasks.

Kolkhoz conditions in the Stalin period

See collectivisation in the USSR and agriculture in the Soviet Union for general discussion of Soviet agriculture. 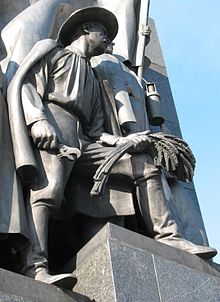 "Kolkhoznik"; a fragment of a Taras Shevchenko monument.

In a kolkhoz, a member, called a kolkhoznik (Russian: колхо́зник, feminine form kolkhoznitsa, Russian: колхо́зница), received a share of the farm's product and profit according to the number of days worked, whereas a sovkhoz employed salaried workers. In practice, most kolkhozy did not pay their "members" in cash at all. In 1946, 30 percent of kolkhozy paid no cash for labor at all, 10.6 paid no grain, and 73.2 percent paid 500 grams of grain or less per day worked.[5] In addition the kolkhoz was required to sell its grain crop and other products to the State at fixed prices. These were set[by whom?] very low, and the difference between what the State paid the farm and what the State charged consumers represented a major source of income for the Soviet government.

In 1948 the Soviet government charged wholesalers 335 rubles for 100 kilograms of rye, but paid the kolkhoz roughly 8 rubles.[6] Nor did such prices change much to keep up with inflation. Prices paid by the Soviet government hardly changed at all between 1929 and 1953, meaning that the State came to pay less than one half or even one third of the cost of production.[6]

Members of kolkhozy had the right to hold a small area of private land and some animals. The size of the private plot varied over the Soviet period, but was usually about 1 acre (0.40 ha). Before the Russian Revolution of 1917 a peasant with less than 13.5 acres (5.5 ha) was considered[by whom?] too poor to maintain a family.[7] However, the productivity of such plots is reflected in the fact that in 1938 3.9 percent of total sown land was in the form of private plots, but in 1937 those plots produced 21.5 percent of gross agriculture output.[8] Kolkhozniki had to do a minimum number of days work per year both on the kolkhoz and on other government work (such as road building). In one kolkhoz the requirements were a minimum of 130 days a year for each able-bodied adult and 50 days per boy aged between 12 and 16. That was distributed around the year according to the agricultural cycle.[9] If kolkhoz members did not perform the required minimum of work, the penalties could involve confiscation of the farmer's private plot, a trial in front of a People's Court that could result in three to eight months of hard labour on the kolkhoz or up to one year in a corrective labor camp.[10]

In both kolkhozy and sovkhozy, villagers were prevented from leaving, and especially from moving from rural areas to urban areas. In urban areas, a system of internal passports and residence permits existed to control the movement of population, but in the countryside the villagers did not even have the internal passports which were legally necessary for any domestic travel. Until 1969 the law obliged all children born on a collective farm to work there as adults unless they specifically received permission to leave.[11][12] In effect, farmers became tied to their sovkhoz or kolkhoz: Shklarov and Matusovski characterize kolkhozy as a "system of 'neo-serfdom'".[13] The Communist bureaucracy filled the role formerly held in Russia by tsarist-era serf-owners.[14][need quotation to verify]

Basic statistics for the USSR

Kolkhozes and sovkhozes in the USSR: number of farms, average size, and share in agricultural production

Disappearance of the kolkhoz after 1991

With the dissolution of the Soviet Union in December 1991, the former Soviet republics became independent states that pursued, with varying degrees of vigor and resolve, a general policy of transition from the Soviet centrally planned economy to a market economy. Farm restructuring was one of the components of the transition agenda in all of the newly independent states, all of which adopted laws (typically called "Law on Enterprises and Entrepreneurship" in the various native languages) that allowed new corporate forms of farming to emerge (in addition to family farms).

Still, field surveys conducted in CIS countries in the 1990s generally indicated that, in the opinion of the members and the managers, many of the new corporate farms behaved and functioned for all practical reasons like the old kolkhozes.[15] Formal re-registration only "changed the sign on the door" and did not produce radical internal restructuring of the traditional Soviet farm, although this was badly needed for improving productivity and efficiency of the former Soviet farms.[citation needed]

Number of kolkhozes and all corporate farms in Russia, Ukraine, and Moldova 1990-2005

Kolkhozes have disappeared almost completely in Transcaucasian and Central Asian states. In Armenia, Georgia, and Azerbaijan the disappearance of the kolkhoz was part of an overall individualization of agriculture, with family farms displacing corporate farms in general. In Central Asian countries, some corporate farms persist, but no kolkhozes remain. Thus, in Turkmenistan, a presidential decree of June 1995 summarily "reorganized" all kolkhozes into "peasant associations" (Turkmen: daikhan berleshik).[15] In Tajikistan, a presidential decree of October 1995 initiated a process of conversion of kolkhozes into share-based farms operating on leased land, agricultural production cooperatives, and dehkan (peasant) farms.[16] However, contrary to the practice in all other CIS countries, one-third of the 30,000 peasant farms in Tajikistan are organized as collective dehkan farms and not family farms. These collective dehkan farms are often referred to as "kolkhozy" in the vernacular, although legally they are a different organizational form and the number of "true" kolkhozes in Tajikistan today is less than 50. Similarly in Uzbekistan the 1998 Land Code renamed all kolkhozes and sovkhozes shirkats (Uzbek for agricultural cooperatives) and just five years later, in October 2003, the government's new strategy for land reform prescribed a sweeping reorientation from shirkats to peasant farms, which since then have virtually replaced all corporate farms.

Countries outside the USSR