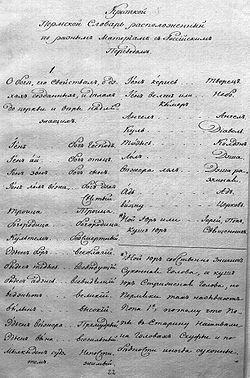 Komi is a Uralic language closely related to Udmurt.

The Komi-Permyak language, spoken in Perm Krai of Russia and written using the Komi Cyrillic alphabet, was co-official with Russian in the Komi Okrug of the Perm Krai.

In the 1920s, the soviet authorities introduced the new name for the Komi language in Perm Region as коми-пермяцкий язык, combining the native name of the language with the Russian one. The new name was transliterated in Komi as коми-пермяцкöй кыв 'Komi-Permyak language'. In so way the local language was nominally separated from the Komi-Zyrian language, that officially received the original name коми кыв. The Komis of Region Perm had to officially use the new name, even though it has abusive connotations for the speakers, continuing in their colloquial speech to use exclusively the original name of their language as коми кыв.

Only in the early 2000s (decade) has started a controversial process of replacing the offensive official name by a more correct one. The term перем коми кыв 'Permian Komi language' was proposed and it is used nowadays (alongside the old term) in local mass-media, in scientific papers and in the Komi-Permyak Wikipedia.

All the Komi-Permyak dialects are easily intelligible with one another and to some extent with the Komi-Zyrian dialects. 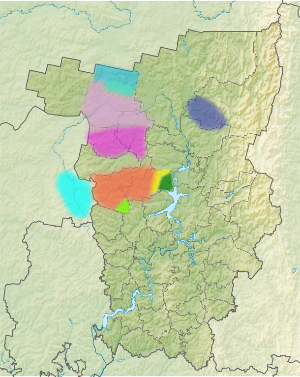 The Komi-Permyak dialects might be divided both geographically into Northern and Southern groups and phonemically into /l/ and /v/ groups:[4]

Earlier there was a southern group too, in the Obva river basin, but now it is fast entirely extinct. Its only remain, the Nerdva dialect, is regarded usually together with the central group, which in so way became "southern".

The central (new southern) and northern groups of Komi-Permyak are spoken in Komi Okrug of Perm Krai, where the language was standardized in the 1920s. The modern standard is based on Kudymkar dialect of the central group, but many elements of northern dialects were included too, so that the "literary language" has significant differences in its morphological system from the "main" dialect.

The central dialects, spoken in Ińva river basin, differ considerably from all the other Komi-Permyak dialects due to the general shift of etymological /l/ to /v/, /w/ and finally to the lack of the consonant, that has provoked the huge changes in morphology.

The differences between the Kudymkar and Uliś Ińva dialects are mainly in accentuation: the Uliś Ińva has a phonological stress (the Öń too), whereas the Kudymkar dialect (like as Ńerdva) has a morphological one. The Ńerdva dialect retains the etymological /l/. The same can be said about the Öń dialect (recently extinct), that had connections with the eastern Permian.[5]

The northern group of the Permian dialects (upon Kösva, Kama and Lup rivers) was under a strong Zyrian influence on all the levels. The Köć and Kös dialects are closely related with some Syktyv dialects of Zyrian, whereas the Lup dialect for a long time was in tenuous connections with the Upper Ezhva dialect.

An only relic of the eastern Permian is the Yaźva dialect, ca. 200 speakers of the ca. 900 ethnical Komis in Krasnovishersky District of Perm Krai. In the early 2000s (decade) it was standardized by authority of the krai. The dialect has archaic system of vowels (including /ö/, /ü/ and /ʌ/), while its accentuation is similar to Uliś Ińva's and its lexical system likes the Northern Permian one.

The Western Permian group is presented by another marginal dialect, Źuźdin (ca. 1000 person living in Kirov Oblast near the border of Komi Okrug).

In the Komi-Permyak standard language there are the same 26 main consonants and 7 vowels as in Komi-Zyrian.

The Komi-Permyak vowel system can be considered as being three-dimensional, where vowels are characterised by three features: front and back, rounded and unrounded and vowel height.

Komi-Permyak does not distinguish between long and short vowels and does not have vowel harmony. There are no diphthongs; when two vowels come together, which occurs at some morpheme boundaries, each vowel retains its individual sound.

The both regional standards of the Komi language have an identical alphabet, introduced in 1938. The alphabet (анбур) includes all the Russian letters plus two additional graphemes: і and ӧ.

Komi is an agglutinating language. It uses affixes to express possession, to specify mode, time, and so on.

In Permian Komi there are two grammatical numbers: singular and plural. The singular is the unmarked form of a word, and the plural is obtained by inflecting the singular.

The plural marker of nouns is /ez/ (orthographically эз or ез) immediately following a word stem before any case or other affixes. The last consonant of the stem before the plural suffix has to be duplicated.

The plural suffix has also a redused variant (a "weak form") /е/ (orth. э or е), that is used combining with some weak forms of possessive suffixes, e.g. киэт 'your (Sg.) hands ' versa киэз 'hands'.

The Permian Komi possessive suffixes are added to the end of nouns either before or after a case suffix depending of case. The three suffixes of singular possession have in addition to their main forms the weak variants used combining with a weak form of plural suffix, weak forms of some cases or forming the suffixes of plural possession.

The possessive suffix of 3Sg is widely used also as a definite article. In colloquial speech it is the main meaning of this suffix.

It is assumed, that the Permian Komi standard language has eighteen noun cases: ten grammatical cases and eight locative cases. The disputes continue about the status of some monosyllabic postpositions and a set of dialectal reduced forms of postpositions that can be treated as case suffixes too. The maximal amount of all possible cases reaches 30.

However most adjectives can also be used as nouns and sometimes as appositions, in which case they are declined: e.g. ыджыт ("big") → ыджыттэзісь ("out of the bigs"). The declensional paradigma is the same as by nouns, except the main accusative form, that became by adjectives suffix ö instead of öс or a null morpheme by nouns: адззи басöк нывкаöс 'I have found a beautiful girl' → адззи басöкö 'I have found a beautiful [girl]'.

Being predicative an adjective agrees with the subject for number. The plural marker of the predicative is öсь: керкуыс ыджыт 'the house is big ' → керкуэc ыджытöсь 'the houses are big'.

The adjective in Permian Komi have 5 degrees of comparison

The numerals in Komi-Permyak [6]

The verbal stem is a 2ed person singular of imperative mode: мун 'go', кер 'make'. All the other forms are formed by adding suffixes to the stem.

Some verbal stems having a consonant cluster at the end become expanded with a so-called "voyelle de soutien" ы which is dropped before the suffixes beginning with a vowel: кывзы = кывз+ы 'hear', видчы 'swear' = видч+ы, e. g. кывзыны 'to hear', кывзытöн 'by hearing' but кывзі 'I heard', кывзö 'he hears', кывзан 'you hear'. Thus, these stems with a consonant cluster have their full und reduced variants.

Permian infinitives are marked with -ны added to a stem as in мyнны 'to go', кывзыны 'hear'

All Permian Komi verbs are conjugated in the same way, except for the defective verb вöвны 'to be'.

The indicative mood has three tenses: present, future and past. The main marker of the present and future tense is а (negat. о), the marker of the past tense is и (negat. э).

Here is conjugation of verb керны 'make, do':