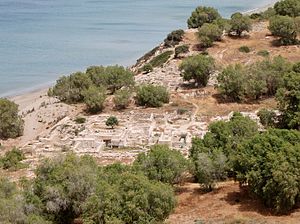 Kommos (Greek: Κομμός) is a Greek prehistoric Bronze Age port and archaeological site in southern Crete. It was a busy port with connections to the Near East that continued into historic periods; the rich finds and elaborate buildings reflect the importance of foreign trade for the Cretan economy.[1] Its ancient name was probably Amyklaion (Greek: Αμύκλαιον), which would reflect a link with Amyclae; Robin Lane Fox speculates that it is referred to in Odyssey 3.296: "a small rock holds back the great waves."[2] That small rock is likely to have been the natural reef of Papadoplaka and a submerged sandy shore stretching to the coast would have formed a natural harbor.[3] This breakwater was partially degraded by aerial bombing during the Second World War as part of a campaign to deny safe harbours for the Nazis' enemies.[citation needed] The site first attracted the attention of archaeologists in 1924, when Arthur Evans heard about large storage vessels found there and speculated about the existence of a Bronze Age "customs house"; excavations have been carried on by J.W. and Maria Shaw since 1976.[4]

The site does not conform to the traditional "Palatial" style of the Minoans. Built atop the ruins of a smaller stone age settlement, the structure the site contains a single upscale (though far from royal) dwelling attached to the site, six respectably sized dwellings on the hillside to the North and a warren of stone rooms atop the hill of a community of farmers/fishermen.

Though its original use is debated, the site was abandoned several times over its lifetime. During such periods, parts of the site were used as a pottery studio with a large kiln still in evidence.[5] The "Palace's" final incarnation saw the main courtyard converted into "ship sheds" by knocking down the seaside wall and building long narrow rooms open on one end.[6] A paved section of road passing through the site, roads being difficult and expensive propositions at the time, along with the conversion to ship sheds suggests the use of the site as a harbour and customs house by a larger settlement. This is further supported by the relatively large scale of the project when compared to the supply of labour from the small village adjacent. The Bronze Age use of the site corresponds roughly with the power fluctuations of the important nearby Palace of Phaistos, though it may merely represent the fluctuations in the population of the Mesara Plain as a whole.

Nearby is the larger ruined Minoan settlement and palace of Phaistos, which was one of the principal cultural centres of Minoan Crete.[7]