From Infogalactic: the planetary knowledge core
Jump to: navigation, search
Not to be confused with Pravda or Komsomolskaya Pravda in Ukraine.

During the Soviet era, Komsomolskaya Pravda was the All-Union newspaper of the Soviet Union and an official organ of the Central Committee of the Komsomol. It was established according to the decision of the 13th Congress of the Russian Communist Party (b) and the first issue was published on 24 May 1925,[2] in an edition of 31,000 copies.

Komsomolskaya Pravda began as the official organ of the Communist Union of Youth, or Komsomol, the youth wing of the Communist Party of the Soviet Union. As such, it targeted the same 14-28 demographic as its parent organization, focusing initially on popular science and adventure articles while teaching the values of the CPSU. During this period, it was twice awarded the Order of Red Banner of Labour, and was also the recipient of the Order of Lenin, the Order of the October Revolution, and the Order of the Patriotic War.

Amidst the collapse of the Soviet Union, on 1 December 1990 the paper shifted from serving as a Komsomol mouthpiece to a Russian nationwide daily tabloid newspaper. During the 1991 August Putsch, the paper was banned by the State Committee of the State of Emergency, or "Gang of Eight," and did not publish from 19–20 August, the first time in its history that it failed to appear on schedule. Nevertheless, on 21 August, the newspaper published the entire chronicle of the coup as a historical document.

The paper is owned by Media Partner, which in turn is owned by ECN Group, an energy company led by Grigory Berezkin, who has close links to Gazprom. In December 2000 Norwegian media company A-Pressen bought a 25 percent plus one share of the paper.[3] It is published in tabloid format by "Izdatelsky Dom Komsomolskaya Pravda" (Komsomolskaya Pravda Publishing House).[4]

Komsomolskaya Pravda reached its highest circulation in 1990 when it sold almost 22 million daily copies.[5] In 2001 it was the ninth top European newspaper with a circulation of 785,000 copies.[4] It was the top-selling newspaper in Russia in 2006 with daily circulation ranging from 700,000 to 3.1 million copies.[1] Its March 2008 circulation certified by the NCS was 660,000 copies[6] and it was the most read paper in the country based on the findings by the TNS Gallup Media.[7] The same year online version of the paper was also the most visited news website.[7]

In January 2015, the front page of Komsomolskaya Pravda suggested that the United States had orchestrated the Charlie Hebdo shooting.[8]

Editors in Chief of "Komsomolskaya Pravda"

The Editors in Chief, in reverse chronological order: 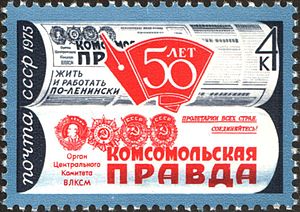