The Koni class is the NATO reporting name for an anti-submarine warfare frigate built by the Soviet Union. They were known in the Soviet Union as Project 1159. 14 were built in Zelenodolsk shipyard between 1975 and 1988. They were originally intended to replace the older Riga-class frigates, but were instead chosen as a design for export to various friendly navies. The Koni I sub class were designed for European waters and the Koni II were made for warmer waters.[3] One ship was retained by the Soviets in the Black Sea for training foreign crews. Only a few of these vessels remain in service today.

The armament consisted of two twin 76 mm AK726 gun mountings and two twin 30mm AA guns, 4 SSN-2 anti ship missile launchers were fitted in some ships, depth charge and mine racks were fitted at the stern. The Libyan vessels had a redesigned layout with the SSN-2 missiles forward of the bridge. The ships had contemporary Soviet radar and sonar.

The ships had 3 shaft CODAG machinery suite, identical to that used in the Grisha class frigates (project 1124). The middle shaft had an 18000 hp gas turbine while the outer two shafts had diesel engines with 9000 hp in total for economical cruising,

In September 1996 a former Cuban Navy Koni II-class frigate designated 356 was scuttled in shallow water in Cayman Brac. This ship was built in 1984 as one of three Koni II-class frigates sold to Cuba to support its Cold War fleet. In 1996 the ship was purchased from Cuba by the Cayman Islands government to be scuttled in Cayman Brac as a dive attraction. The remaining two Cuban Koni II class were expended as targets. Frigate 356 was sunk upright, and initially her deck rested 90 ft (27 m) below the surface. A serious storm in 2004 broke the ship in two, and her bow now lists at a 45 degree angle, while her midships have become a debris field. Before being sunk the ship was renamed Captain Keith Tibbetts after a local politician and diver. It is one of only a few sunken Soviet Naval vessels in the Western Hemisphere, and the only one of two that is easily dived including her sister ship SKR-451.

On July 16, 1998 the former Cuban Navy Koni II-class frigate designated 353 was scuttled in shallow water near the Cuban resort town of Varadero in the Parque Submarino Cayo Piedra del Norte as an attraction for divers. It is rumored that Fidel Castro promoted the project, being an avid diver himself. The frigate sank upright, and sits on the sand bottom in 90 ft (27 m) of water. For an unknown reason her hull number was changed from 353 to 383 prior to the scuttling.[4] The dive operators in the varadero area refer to the dive site as Patrol boat 383 or simply P.B even though it is a frigate. 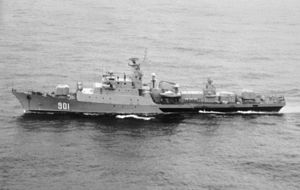 Mourad Rais of Algerian National Navy in 1986. One of the warm-water export versions.