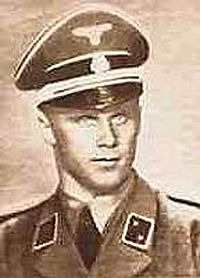 Konrāds Kalējs (26 June 1913 – 8 November 2001)[1] was a Latvian soldier who was a Nazi collaborator and an alleged war criminal during World War II. He gained notoriety for evading calls for his prosecution across four countries, more than once under the threat of deportation.

Kalējs was born in Riga, Latvia, Tsarist Russia, in 1913. In 1935 he joined the Latvian army as a cadet, and attained the rank of lieutenant four years later.[2]

In 1941, following the German invasion of Latvia as part of Operation Barbarossa, Kalējs deserted the Red Army (Latvia by that stage having been occupied by the Soviet Union) and joined the Nazis, becoming a member of the Nazi-controlled Latvian security police.[1] Kalējs would later assert that he worked as a farmhand during this period.[2] It was common practice in occupied nations for indigenous security forces to act in support of German military and security forces in the collection, interrogation, and transport of "undesirables"; such as Jews, Roma, Communists and partisans.[citation needed]

At the end of the war Kalējs moved to Denmark. In 1950 he emigrated to Australia, where he was employed at the Bonegilla Migrant Reception and Training Centre in north-east Victoria.[1] Becoming an Australian citizen in 1957, Kalējs later left for the United States in 1959 for a lucrative career in property development.[1]

In 1984, Kalējs' Nazi connections were revealed, and he was arrested the following year after walking into the Puño Airlines sting operation.[3]

After a four-year process, a United States court revoked Kalējs' visa, having found that there was "unequivocal evidence" that he had participated in war crimes in Latvia, although as an Australian citizen Kalējs was not prosecuted.[1] The United States Department of Justice alleged that between July 1941 and June or July 1944, Kalējs was a company commander in the notorious Arajs Kommando (Sonderkommando Arajs), one of several security police units which assisted the Einsatzgruppen death squads in killing Jews and Roma in Latvia, and in guarding the Salaspils concentration camp.[2]

According to renowned Holocaust scholar Raul Hilberg, who gave evidence during the American proceedings against Kalējs, German documents established that the Einsatzkommando, the Arajs Kommando and similar groups were responsible for killing about 29,000 people (including about 26,000 Jews) by August 1941 and a further 27,800 Jews near Riga by the end of 1941 (the Arajs Kommando were responsible for about half of this total).[2]

In 1999, Kalējs left Australia for the United Kingdom, where he settled in Catthorpe, Leicestershire, staying at Catthorpe Manor, a nursing home run by the Latvian Welfare Fund.[2] After being discovered, then Home Secretary Jack Straw announced that moves would be made to deport Kalējs, at which point he returned to Australia.[1] The Simon Wiesenthal Center, which had uncovered Kalējs' presence in Catthorpe, criticised Straw's decision: a spokesperson labelled it a "missed opportunity" to prosecute him, and warned that "if he returns to Australia he will benefit from the country's lax attitude towards Nazi war criminals."[4]

Latvian authorities finally charged Kalējs with war crimes offences in September 2000, relating to his participation at the Salaspils labour camp, and in May 2001 a Melbourne court ordered Kalējs' extradition to Latvia.[1] Kalējs appealed this decision, and the ensuing proceedings were delayed by illness, with Kalējs reportedly suffering from dementia and prostate cancer at the time. His lawyers claimed he was blind and had lost his memory.[5]

Kalējs died in Melbourne in November 2001, aged 88. His lawyers criticised the government of Australia for being "inhumane and callous in its bid to extradite a sick old man" and described the process as a "witch hunt".[6] Kalējs eventually admitted to working for the Nazi-run Latvian police in his last Australian interview.[1]