Konstantin Paustovsky was born in Moscow. His father, descendant of the Zaporozhian Cossacks, was a railroad statistician, and was “an incurable romantic and Protestant”. His mother came from the family of a Polish intellectual. Konstantin grew up in Ukraine, partly in the countryside and partly in Kiev. He studied in “the First Imperial” classical Gymnasium of Kiev, where he was the classmate of Mikhail Bulgakov. When Konstantin was in the 6th grade his father left the family, so he was forced to give private lessons in order to earn a living. In 1912 he entered the University of Kiev, the faculty of the Natural History. In 1914 Konstantin Paustovsky transferred to the Law faculty of the University of Moscow, but World War I interrupted his education. At first he worked as a trolley-man in Moscow, then served as a paramedic in a hospital train. During 1915, his medical unit retreated all the way through Poland and Belarus. After two of his brothers died on the front line, Konstantin returned to his mother in Moscow, but later he left and wandered around, trying his hands at many jobs. He started with the metallurgical factories in Yekaterinoslav (now: Dnipropetrovsk, Ukraine) and Yuzovka (now: Donetsk, Ukraine). In 1916 he lived in Taganrog, where he worked at the Taganrog Boiler Factory (now: Krasny Kotelschchik). Later Konstantin Paustovsky joined a cooperative association of fishermen (artel) in Taganrog, where he started his first novel Романтики ("Romantiki", Romantics) to be published in 1935. The novel, its content and feelings agreed with its title. It was author’s story of what he had to see and feel in his youth. One of the heroes, the old Oscar, was an artist who resisted all of his life, people forcing him to become a moneymaker. The main theme throughout “Romantics” – destiny of an artist who strives to overcome his loneliness – was later used in other works of Paustovsky. In his later works, as Разговор о рыбе (“Razgovor o ribe”, Conversation about the Fish), Азовское подполье (“Azovskoe podpolie”, Azov Underground), Порт в траве (“Port v trave”, Seaport in The Grass) and others, Paustovsky described the time spent in Taganrog.

Paustovsky began writing while still in Gymnasium. His first works were imitative poetry. He eventually limited his writing to prose, after Ivan Bunin who wrote in a letter, "I think that your sphere, your real poetry, is prose. It is here, if you are determined enough, that I am sure you can achieve something significant." His first stories to be published were “Na vode” (“On The Water”) and “Chetvero” (“The Four”) in 1911 and 1912. During World War I, Paustovsky wrote some sketches of life at the front, and one of them was also published. His first book, Morskiye Nabroski (“Sea Sketches”), was published in 1925, but was little noticed. It was followed by Minetoza in 1927, and the romantic novel Blistaiushie Oblaka (“Shining Clouds”) in 1929. His work of this period was influenced by Alexander Grin as well as the writers of the "Odessa school", (Isaac Babel, Valentin Kataev, and Yuri Olesha). In the 1930s Paustovsky visited various constructions sites and wrote in praise of the industrial transformation of the country. To that period belong the novels Kara-Bugaz (1932) and Kolkhida (1934). Kara-Bugaz won particular praise. It is essentially a tale of adventure and exploration in the region around Kara-Bugaz Bay, where the air is mysteriously heavy. It begins in 1847 and moves to the Russian Civil War period when a group of Red Guards is abandoned to near-certain death on a desolate island. There are, however, survivors, who are rescued by an explorer. Some of the survivors stay on to help in the exploration, development and study of the natural wealth of the region.

Paustovsky continued to explore historical themes in Severnaya Povest ("Tale of the North", 1938). In this tale, after the anti-Tsarist Decembrist uprising in Saint Petersburg, a wounded officer who took part in the uprising and a sailor try to make it by foot across the ice to Sweden. They are captured in a sequence of dramatic events. Years later, in Leningrad of the 1930s, the great-grandsons of the participants in the events unexpectedly meet. In the late 1930s, Russian nature emerged as a central theme for Paustovsky, for example, in Letniye Dni ("Summer Days", 1937) and Meshcherskaya Storona (1939). For Paustovsky, nature was a many-faceted splendor in which man can free himself from daily cares and regain his spiritual equilibrium. This focus on nature drew comparisons with Mikhail Prishvin. Prishvin himself wrote in his diary, "If I were not Prishvin, I would like to write like Paustovsky."

During World War II Paustovsky served as a war correspondent on the southern front. In 1943 Paustovsky produced a screenplay for the Gorky Film Studio production of "Lermontov", directed by A. Gendelshtein. Another work of note is Tale of the Woods (1948). This story opens in a remote forest in the 1890s, where Tchaikovsky is composing a symphony. The young daughter of the local forester often brings Pyotr Ilyich Tchaikovsky berries. Half a century later, the daughter of this girl is a laboratory technician at the local forest station.

From 1948 until 1955 Paustovsky taught at the Maxim Gorky Literature Institute. Paustovsky also edited a few literary collections, Literary Moscow (1956) and Pages from Tarusa, in which he tried to bring new writers to the public's attention and to publish writers suppressed during the Joseph Stalin years.

Other major works include Snow, Crossing Ships (1928); The Black Sea (1936); and The Rainy Dawn (1946). Paustovsky was also the author of several plays and fairy tales, including "Steel Ring".

Perhaps Paustovsky’s most famous work is his autobiography “Povest o Zhizni” (“Story of a Life”). It is not a strictly historical document but rather a long, lyrical tale focusing on the internal perceptions and poetic development of the writer . It has been called a "biography of the soul" rather than a biography of events. Nonetheless, it does provide a unique view of life in Russia during the turbulent years of WWI, the Russian Civil War and rise of the Soviets, all of which Paustovsky participated in. 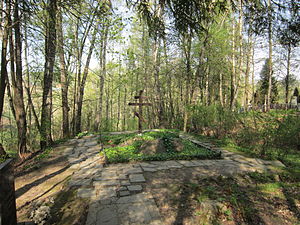 In 1965, Paustovsky was nominated for a Nobel Prize for literature, the prize was awarded instead to Mikhail Sholokhov.[1]

In February 1966 he was one of the 25 prominent figures from science and the arts who signed a letter to the 23rd Congress of the Communist Party of the Soviet Union, appealing against re-Stalinization in the wake of the Sinyavsky-Daniel trial. 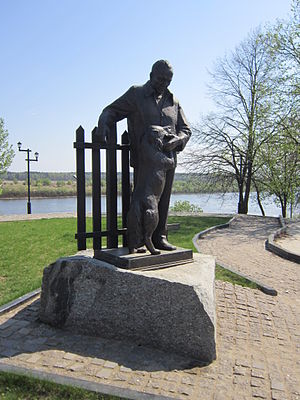