The Korea Aerospace Research Institute (KARI) is the aeronautics and space agency of South Korea. Its main laboratories are located in Daejeon, in the Daedeok Science Town. Current projects include the KSLV-2 launcher. Past projects include the 1999 Arirang-1 satellite. The agency was founded in 1989. Prior to South Korea's entry into the IAE in 1992, it focused primarily on aerospace technology.

KARI began in 1990 to develop its own rockets. It produced the KSR-I and KSR-II, one and two-stage rockets in the early 1990s.

In December 1997 it began development of a LOX/kerosene rocket engine. KARI wished to develop satellite launch capability. A test launch of the KSR-III took place in 2002. 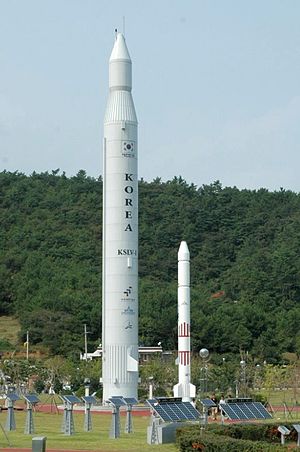 KARI is also developing Unmanned Aerial Vehicles, high-altitude airships, and a next-generation multi-purpose helicopter project. In addition, several satellites, including the KOMPSAT (also known as Arirang) Seriese, the COMS (Communication, Ocean and Meteorological Satellite), and the STSAT (Science and Technology Satellite), are developed, operated, or under development by KARI. On January 30, 2013, they launched a satellite into space from their own soil for the first time.[3]

In late 2011, KARI unveiled it tiltrotor Unmanned Aerial Vehicle (UAV) that can fly at around 400 km/hr. This was the world's first tilt rotor UAV to have been developed.