On April 20, 1978, Soviet air defense shot down Korean Air Lines Flight 902 (KAL 902) near Murmansk, Soviet Union, after the civilian aircraft violated Soviet airspace and failed to respond to Soviet ground control and interceptors.[1][2] Soviet Air Defence Forces initially identified it as part of the US air reconnaissance force, which carried out thousands of flights along Soviet borders annually at the time. Captain Alexander Bosov, pilot of the Sukhoi Su-15 that brought down Flight 902, saw Asian logogram characters on the tail of the Korean aircraft, and reported this to the ground control. Despite this, Vladimir Tsarkov, commander of the 21st Soviet Air Defense Corps, ordered Bosov to take down the plane, as the plane failed to respond to repeated orders to land, and was approaching the Soviet border with Finland. The Su-15 opened fire, forcing the plane to descend, and killing two of the 109 passengers and crew members aboard Flight 902. The plane made an emergency landing on the frozen Korpiyarvi lake (not to be confused with the Korpijärvi lake) near the Finnish border.[3] 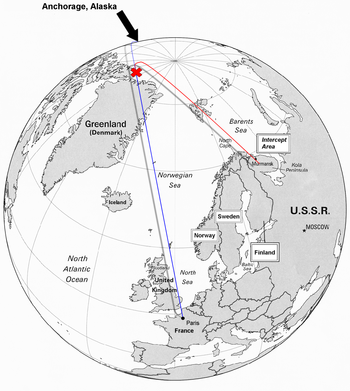 Flight 902 departed from Paris, France on a course to Seoul, South Korea. The plane’s only scheduled stop was in Anchorage, Alaska, where it would refuel and proceed to Seoul, avoiding Soviet airspace. As the plane passed over Alert[4] on Ellesmere Island — located about 800 km (500 miles) from the North Pole — flight captain Kim Chang Ky (alternatively spelled Kyi or Kyu) suddenly changed his course and headed southeast toward Murmansk.

The aircraft was not fitted with an inertial navigation system, and GPS navigation was not available at the time. Due to an error in calculating magnetic declination, the plane flew in an enormous, right-turning arc. (The location of the turn corresponded quite closely with the location of the North Magnetic Pole, which is likely to have contributed to, if not directly caused, the error.) It flew southeast over the Svalbard archipelago and the Barents Sea, past northern Scandinavia and into Soviet airspace.

Soviet air defense radar spotted the plane approximately 400 kilometres (250 mi) away from Soviet territorial waters.[5] At first, the Soviets assumed the plane was a naval aircraft that was returning from a mission, having forgotten to change its IFF transponder code. When the Korean aircraft passed over the Kola Peninsula at 21:19 (Moscow time), Soviet air defense dispatched Alexander Bosov to intercept.[citation needed]

Reconstruction of HL7429 being intercepted by Su-15s

Bosov incorrectly identified the plane as a United States Air Force reconnaissance RC-135. When reporting back to Tsarkov, Bosov said he could see a maple leaf on the plane's tail, implying that it belonged to North Atlantic Treaty Organisation (NATO). After a few moments, he corrected himself, stating that he could see Chinese characters and the "maple leaf" was actually a red stork with wings spread.[5]

According to Kim's account of the attack, the interceptor approached his aircraft from the right side rather than the left as required by International Civil Aviation Organization (ICAO) regulation.[5] Kim decreased his speed and turned on the navigation lights, indicating that he was ready to follow the Soviet fighter for landing.[5]

According to Soviet reports, the intruder repeatedly ignored commands to follow the interceptor, and Flight 902 began drifting toward Finland. However, tapes released by Rovaniemi Area Control Centre show that Kim transmitted a call signal three times immediately prior to being shot down and attempted to communicate with the intercepting pilot.

Bosov tried to convince his superiors that the plane was not a military threat, but after receiving orders to shoot it down[4][5] he fired a pair of R-60 missiles. The first missile flew past the target.[5] The second one hit the left wing, knocking off approximately four meters of its length. The missile also punctured the fuselage, causing rapid decompression and jamming one of the plane's four turbines.[5]

After being hit, the airliner quickly descended from an altitude of 9,000 m (30,000 ft).[5] It fell into a cloud, disappearing from Soviet air defense radars. Soviets mistook the part of the wing that had fallen off Flight 902 for a winged missile and dispatched another Su-15 interceptor to fire at it.[5] Anatoly Kerefov, another Soviet pilot, replaced Bosov because his aircraft was running low on fuel.

For the next 40 minutes, Flight 902 flew across the whole Kola Peninsula at a low altitude, searching for a place to land. After several unsuccessful attempts at landing, Kim brought the plane down on the ice of the frozen Korpiyarvi lake in Karelian ASSR, located approximately 140 kilometres (87 mi) from the Finnish border.[5][6]

Finnish sources state that Soviet air defense did not have any information on the plane's whereabouts after it disappeared from the radar.[5] However, Tsarkov stated that Kerefov located Flight 902 and led it to the Afrikanda air base.[5] Tsarkov went on to say that Kim fell behind and landed on the lake.[5] Kerefov said he practically forced the plane to land on the ice of Korpiyarvi.[5]

Soviet helicopters rescued the 107 survivors and transported them to the city of Kem in Karelia. The passengers were quartered in the garrison's Officers' Lodge.[5] After two days at the Murmansk Airport, the passengers were released to the U.S. Consulate in Leningrad.[5] The crew was held for investigation and released after making a formal apology. The Korean pilots acknowledged that they deliberately failed to obey the commands of Soviet interceptors. They petitioned the Presidium of the Supreme Soviet of the USSR for pardon.[5]

Eventually, the passengers were deported from the Soviet Union back to Seoul. The Soviet Union invoiced South Korea $100,000 for caretaking expenses.

TASS, the official news agency of the Soviet Union, released a statement to the public on April 30, 1978.[5] The Soviet Union refused to cooperate with international experts while they investigated the incident and did not provide any data mined from the plane's "black box".[5] The airplane was dismantled and all equipment transferred by helicopter onto a barge in Kandalaksha Gulf.[5] The deputy chief commanding officer of Soviet air defense, Yevgeniy Savitsky, personally inspected the pilot's cockpit.[5]

The incident was a major embarrassment to Soviet air defense because Flight 902 had already entered Soviet territory before it was intercepted. This led to a shift in command and contributed to the shooting down of another Korean Airlines flight, KAL 007, in 1983, which killed all aboard.[7][8]

Korean Air continues to use the flight number 902 on its Paris-Seoul route, but it is now a nonstop eastbound route. The flight from Paris now departs from Charles de Gaulle Airport instead of Orly and arrives at the Incheon Airport in Seoul instead of Gimpo. Korean Air predominantly uses the Airbus A380 on this route.[9]