The Korean People's Army Air Force (Chosŏn'gŭl: 조선인민군 공군; Hanja: 朝鮮人民軍 空軍) is the appellation of the unified aviation forces of North Korea. The KPAF is the 2nd largest branch of the Korean People's Army comprising an estimated 110,000 members.[3] It possesses 940 aircraft of different types; mostly of Soviet and Chinese origin. Its primary task is to defend North Korean airspace.[4] When the People's Army was forged with Soviet assistance, the aviation unit became its air force branch on August 20, 1947. North Korea has celebrated August 20 as Air Force Foundation Day ever since.

Kim Il-sung set up the Aviation Association branches in Pyongyang, Sinuiju, Chongjin and other parts of the country in 1945. In December 1945 he merged them into the Aviation Association of Korea. The air force became a separate service in 1948. The KPAF incorporates much of the original Soviet air tactics, as well as North Korean experience from the UN bombings during the Korean War.

The KPAF has on occasion deployed abroad to assist fellow socialist states, with a North Korean flight of MiG-21s deploying to Bir Arida to help defend southern Egypt during the Yom Kippur War.[5] 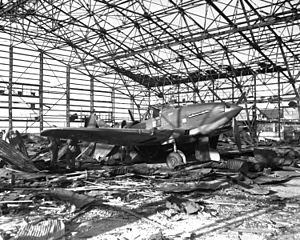 Given North Korea's experience with heavy U.S. bombardments in the Korean War, its aim has been mainly to defend North Korean airspace. The heavy reliance on fighter aircraft, Surface-to-air missile and Anti-aircraft warfare reflects this. However, since nearly all of North Korea's aircraft inventory consists of aging and obsolete Soviet and Chinese aircraft, the primary goal of the air force may have changed in the last years to providing ground support for the land forces and threatening South Korean population centers and military targets with a massive air attack.

In this way, North Korea could try to maintain military parity with South Korea by using its air force as a deterrent, much like its ballistic missiles, instead of trying to maintain a technological parity in aircraft types for individual air-to-air roles. This seems to be confirmed by the recent redeployment of 120 mostly obsolete fighters, bombers and transport aircraft closer to the demilitarized zone, even though 440 modern aircraft are also based near the DMZ. Keeping in mind the production, storage and use of a vast chemical, biological and possibly nuclear weapons inventory by North Korea, this change in doctrine is even more significant.

From 1978 to 1995 General Jo Myong-rok was the commander of the air force. In October 1995 he was promoted to vice-marshal and appointed Chief of the KPA General Political Bureau and a member of the Korean Workers' Party Central Military Committee. His place as commander of the Air Force was taken by Colonel General Oh Gum-chol.

The number of annual flying hours (AFH) per pilot is, like almost every other aspect of the KPAF, very hard to estimate. Most sources on the subject abstain from giving hard numbers, but all of them estimate the average annual flying hours per pilot as being 'low' to 'very low'. The number of annual flying hours is of course very important in estimating the individual skill and experience of the pilots of an air force: more annual flying hours suggests better trained pilots. Most estimates present a rather grim picture: AFH per pilot for the KPAF are said to be only 15 or 25[6] hours per pilot each year - comparable to the flying hours of air forces in ex-Soviet countries in the early 1990s. In comparison, most NATO fighter pilots fly at least 150 hours a year. Ground training, both in classrooms, on instructional airframes or in a flight simulator can only substitute for 'the real thing' to a certain degree, and the low number of modern jet trainers in the KPAF arsenal points to a very modest amount of flying time for the formation of new pilots.

There are a number of possible explanations for the low AFH: concern over the aging of equipment, scarcity of spare parts - especially for the older aircraft - difficulties with worn airframes, fear of defection and the scarcity of fuel are all contributing factors. It is very likely however that some 'elite' pilots and regiments receive considerably more flying hours. Especially those equipped with modern aircraft and tasked with homeland defence - like the 57th regiment flying MiG-29s and the 60th regiment flying MiG-23s - are receiving multiple times the average AFH per pilot; however, aging equipment, the scarcity of fuel and the general economic crisis in the DPRK will affect these regiments as well, and keep their AFH low compared to NATO AFH.

AFP reported on January 23, 2012 that the KPAF had conducted more flight training than average in 2011.

The Chosun Ilbo reported on March 29, 2012 that the KPAF had dramatically increased the number of flights to 650 per day.[7]

Following is a list of bases where North Korean Army Air Force aircraft are permanently based.[8][9]

West Coast and Pyongyang area (Pyongyang is also the location of HQ, KPAAF) 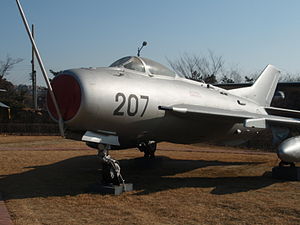 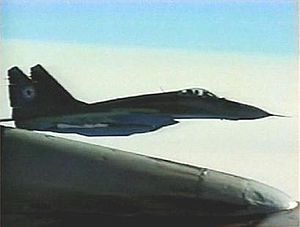 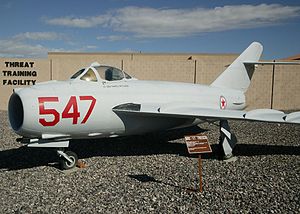 North Korea is believed to operate some 300 reconnaissance drones and 10 attack UAVs.

The DoD's annual report to congress about North Korea's military capabilities states that North Korean press reported that the UAV was capable of carrying out precision strikes by ramming a target.[23]

Aircraft of the KPAF operate the following missiles:

The KPAAF use the R-23 missile similar to this one

North Korea has deployed a wide range of SAM and AAA systems ranging from the oldest Soviet designs to highly mobile and modern examples. Most SAM systems are of Soviet design lineage with some locally produced designs, while AA artillery is from both Soviet and local suppliers. MANPADS are used extensively, with over 15,000 units fielded according to a 1995 Pentagon report on the country. North Korea has one of the most extensive integrated air defence systems (IADS) in the world, with many of its radars and launchers positioned on fortified elevating platforms, its aircraft positioned in hardened bunkers and even two underground airbases, and some level of coverage for every town.[25] The addition of the KN-06 SAM, which was flight-tested in the spring of 2011, and a local model of the Pechora 2 (Upgraded SA-3), unveiled at a 2012 military parade have notably expanded the systems capabilities. According IHS Jane's Defence Weekly currently has on 2014 two different more updated system: the KN-06/Ponghae-5 was probably related to the Chinese HQ-16A system, while the Ponghae-6 could be related with the HQ-9 or the Russian S-300.[26]

The KPAF operates a wide range of fighter and attack aircraft. North Korea is one of the few nations still operating the obsolete MiG-17 and MiG-19 fighters, yet it operates more modern and fairly capable MiG-23 and MiG-29 fighters. The KPAF's most numerous fighter is the MiG-21, which is somewhat obsolete but still a worthy foe in air-to-air combat, if maintained properly and crewed by experienced pilots. An assessment by US analysts GlobalSecurity.org reported that the air force "has a marginal capability for defending North Korean airspace and a limited ability to conduct air operations against South Korea."[28] Yet, North Korea operates a wide variety of air defence equipment, from short-range MANPADS and ZPU-4 machine guns, to long-range SA-5 Gammon SAM systems and large-calibre AA artillery guns. DPRK has one of the densest air defence networks in the world. Ilyushin Il-28 Beagle bombers provide a medium-range attack platform, despite being generally obsolete. A large part of the ground attack aircraft are kept in heavily fortified hangars, some of which are capable of withstanding a nearby nuclear blast. Stealth capacity is known in the KPAF through researching in radar-absorbing paint and inventory deception.[29]

Generally as a separate service in the KPA the service wears the same KPA uniforms but with air force blue peaked caps (especially for officers) or kepi-styled caps for men and berets for women, worn with their full dress uniforms. Pilots wear helmets and flight suits when on parade and when in flight duty while air defense personnel wear the same duty dress uniforms as their ground forces counterparts but with air force blue borders on the caps.

Due to the political condition of North Korea, several North Korean pilots from the KPAF defected with their jets. These incidents include: