Seon (Sŏn, 禪) is the Korean variant of Chan Buddhism, a school better known in the West through its Japanese variant Zen. 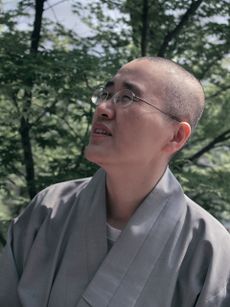 Transmission of Chan to Korea

Seon was gradually further transmitted into Korea, as Korean monks of predominantly Hwaeom (華嚴) and Yogacara (唯識) background[citation needed] began to travel to China to study the Hongzhou school of Mazu Daoyi (709–788) and his successors[2] and the Rinzai school of Linji Yixuan. Mazu's successors had numerous Korean students, some of whom returned to Korea and established their own schools at various mountain monasteries with their leading disciples.[2]

Initially, the number of these schools was fixed at nine. Seon was termed the nine mountain schools" at the time.[1] Eight of these were of the lineage of Mazu Daoyi (馬祖道一) (709-788), as they were established through connection with either him or one of his eminent disciples.[2] The one exception was the Sumi-san school founded by Yieom (利嚴) (869-936), which had developed from the Caodong school (曹洞).[citation needed]

Toǔi (道義 Doui) (died 825), who studied with Zhizang (735-814) and Baizhang Huaihai (百丈) (749-814) is regarded as the first patriarch of Korean Sŏn. He founded the Kaji Mountain school (迦智山 Gaji san school). The Nine mountain Schools adopted the name Jogye Order in 826.[citation needed] The first record of the Nine Mountains school dates from 1084.[2] 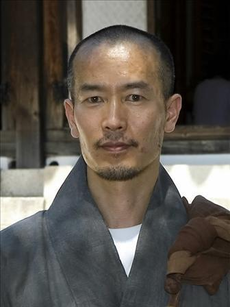 Korean bhikṣu of the Seon school

By the eleventh century Sŏn Buddhism became established in Korea. It distinguished itself from the existing Five Schools[note 1] and their scriptural emphasis.[2] Tension developed between the new meditational schools and the previously existing scholastic schools, which were described by the term gyo, meaning "learning" or "study".[citation needed] Efforts were needed to attain mutual understanding and rapprochement between Sŏn and these scholastic schools.[2]

The most important figure of Goryeo-era Seon was Jinul (Hangul: ; hanja: 知訥, 1158-1210), who established a reform movement in Korea. In his time, the sangha was in a crisis of external appearance and internal issues of doctrine. Buddhism had gradually become infected by secular tendencies and involvements, such as fortune-telling and the offering of prayers and rituals for success in secular endeavors. This kind of corruption resulted in the profusion of increasingly larger numbers of monks and nuns with questionable motivations. Therefore, the correction, revival, and improvement of the quality of Buddhism were prominent issues for Buddhist leaders of the period.[citation needed]

Jinul sought to establish a new movement within Korean Seon, which he called the "samādhi and prajñā society". Its goal was to establish a new community of disciplined, pure-minded practitioners deep in the mountains. He eventually accomplished this mission with the founding of the Songgwangsa (松廣寺) at Jogyesan as a new center of pure practice.[citation needed]

Jinul's works are characterized by a thorough analysis and reformulation of the methodologies of Seon study and practice. He laid an equal emphasis on doctrinal teaching and Sŏn practice.[2] One major issue that had long fermented in Chan, and which received special focus from Jinul, was the relationship between "gradual" and "sudden" methods in practice and enlightenment.[citation needed] Drawing upon various Chinese treatments of this topic, most importantly those by Guifeng Zongmi (780-841) and Dahui Zonggao (大慧宗杲) (1089–1163), Jinul created Pojo Sŏn,[2] a "sudden enlightenment followed by gradual practice" dictum, which he outlined in a few relatively concise and accessible texts.[3] Jinul incorporated Dahui Zonggao's gwanhwa (Chinese: 觀話; pinyin: guān huà, "observing the critical phrase") into his practice.[4] This form of meditation is the main method taught in Korean Seon today.[5]

It was during the time of Jinul that the Jogye Order, a Seon sect, became the predominant form of Korean Buddhism, a status it still holds.[citation needed] Taego Bou (1301–1382) studied the Linji school in China and returned to unite the Nine Mountain Schools.

At the end of Goryeo and during Joseon the Jogye Order was combined with the scholarly schools. It lost influence under the ruling class, which embraced neo-Confucianism.[web 2] Buddhism was gradually suppressed for the next 500 years. The number of temples was reduced, restrictions on membership in the sangha were installed, and Buddhist monks and nuns were literally chased into the mountains, forbidden to mix with society. Joseon Buddhism was first condensed to Seon and Gyo. Eventually, these were further reduced to the single school of Seon.

During Joseon, the number of Buddhist monasteries dropped from several hundred to a mere thirty-six. Limits were placed on the number of clergy, land area, and ages for entering the sangha. When the final restrictions were in place, monks and nuns were prohibited from entering the cities. Buddhist funerals, and even begging, were outlawed. A few rulers temporarily lifted the more suppressive regulations. The most noteworthy of these was the Queen Munjeong. The queen had deep respect for the brilliant monk Bou (보우, 普雨; 1515–1565), and installed him as the head of the Seon school.[citation needed]

Buddhist monks helped in repelling the Japanese invasions of Korea (1592–98). Monks were organized into guerrilla units, which enjoyed some instrumental successes. The "righteous monk" (義士; uisa) movement was led by Hyujeong (1520–1604), a Seon master and the author of a number of important religious texts. The presence of the monks' army was a critical factor in the eventual expulsion of the Japanese invaders.

Seosan made efforts toward the unification of Buddhist doctrinal study and practice. He was strongly influenced by Wonhyo, Jinul, and Giwha. He is considered the central figure in the revival of Joseon Buddhism, and most major streams of modern Korean Seon trace their lineages back to him through one of his four main disciples: Yujeong (1544–1610); Eongi (1581–1644), Taeneung (1562–1649) and Ilseon (1533–1608), all four of whom were lieutenants to Seosan during the war with Japan.[citation needed] 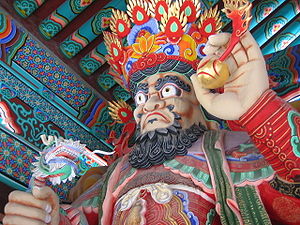 Statue of one of the Four Heavenly Kings

Buddhism during the three centuries, from the time of Seosan down to the next Japanese incursion into Korea in the late nineteenth century, did not change very much. The Buddhism of the late Joseon Kingdom saw a revival of Hwaeom studies. There was also a revival of Pure Land Buddhism.[citation needed]

After the Second World War the United Nations developed plans for a trusteeship administration, the Soviet Union administering the peninsula north of the 38th parallel and the United States Army Military Government in Korea administering the south. The politics of the Cold War resulted in the 1948 establishment of two separate governments, North Korea and South Korea.

Since the middle of the 20th century Christianity has competed with Buddhism in South Korea,[web 3] while religious practice has been suppressed in North Korea.[web 4]

Seon continues to be practiced in Korea today at a number of major monastic centers, as well as being taught at Dongguk University, which has a major of studies in this religion. The largest Buddhist denomination is the Jogye Order.[citation needed]

In the 1980s a debate arose about "sudden" versus "gradual" enlightenment".[web 3] Since Jinul Korean Seon was based on the integration of practice and scholarly study in the slogan "sudden enlightenment, gradual cultivation". The modern Korean Seon master Seongcheol revived the slogan "sudden enlightenment, sudden cultivation", ascribed to Huineng.[web 5] The last three Supreme Patriarchs of the Jogye Order have a stance in this debate that is in accordance with Seongcheol.[citation needed]

Spread in the USA

Korean Seon has been spread in the USA by Seungsahn. He was a temple abbot in Seoul and after living in Hong Kong and Japan, he moved to the US in 1972, not speaking any English. On the flight to Los Angeles, a Korean American passenger offered him a job at a laundry in Providence, Rhode Island, which became headquarters of Seung Sahn's Kwan Um School of Zen. Shortly after arriving in Providence, he attracted students and founded the Providence Zen Center. The Kwan Um School has more than 100 Zen centers on six continents. 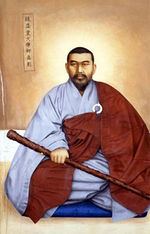 Another Korean Zen teacher, Samu Sunim, founded Toronto's Zen Buddhist Temple in 1971. He is head of the Buddhist Society for Compassionate Wisdom, which has temples in Ann Arbor, Chicago, Mexico City, and New York City.

Seon is known for its stress on meditation, monasticism, and asceticism. Many Korean monks have few personal possessions and sometimes cut off all relations with the outside world. Several are near mendicants traveling from temple to temple practicing meditation. The hermit-recluse life is prevalent among monks to whom meditation practice is considered of paramount importance.

Another defining characteristic of Korean Seon in comparison with other similar schools in Asia is its emphasis on a process described as "sudden awakening/gradual cultivation" in contrast to "sudden awakening/sudden cultivation" that is typical of the Linji and Rinzai schools in China and Japan respectively.[7] In the "sudden awakening/gradual cultivation" approach, one initially awakens to the concept that one is already a perfect Buddha, but their Buddhahood is obscured by ignorance and other mental defilements. However, in order to make Buddhahood a reality, the Seon practitioner must continue to cultivate wholesome states of mind and remove defilements through Seon practices until Buddhahood is fully realized. This approach was previously expounded by the Chinese Ho-tse School of Chan master Zongmi, but was further developed in Korea whereas it died out in China.[7]