Korean philosophy focused on a totality of world view. The emotional content of Shamanism, and the unpredictable, and some aspects of Neo-Confucianism were integrated into it. Traditional Korean thought has been influenced by a number of religious and philosophical thought-systems over the years. As the main influences on life in Korea, often Korean Shamanism, Buddhism, and Confucianism movements have shaped Korean life and thought. 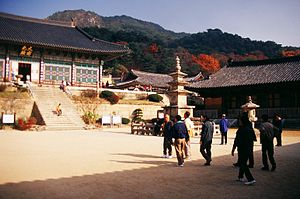 Haeinsa is a Buddhist temple in South Gyeongsang.

Korean Buddhist thinkers refined ideas originally introduced from China into a distinct form. The Three Kingdoms of Korea introduced Buddhism to Japan, from where it was popularized in the West. Korean Buddhism consists mostly of the Seon lineage, which is derivative of the Chen (Zen) Buddhism of China and precursor to Zen Buddhism known in the West through Japan.

Buddhist temples can be found in most parts of Korea and many are considered national treasures.

One of the most substantial influences in Korean intellectual history was the introduction of Confucian thought as part of the cultural exchange from China. Today the legacy of Confucianism remains a fundamental part of Korean society, shaping the moral system, the way of life, social relations between old and young, and high culture, and even survived the modernization of the legal system.

Schools of thought in the Joseon period

This dynasty arose out of the military dictatorships and chaos of the preceding era. Transition in this era was from Buddhism to a soldierly approach to Neo-Confucianism. Much work was done, especially on commentaries, and the Chu Hsi school represented indeed the golden age of Korean religious philosophy. Metaphysical research at this time investigated the theological relations between principle (i) and material/vital force (ki), and between as well the four beginnings (sadan), and the seven feelings (ch'ilchong); with the division of the Joseon Confucianists into two leading schools: one on "force" and one on "principles". The philosopher Hwadam ( Suh Kyungduk, 1489–1546 ) moved to integrate i and ki and spoke of Great Harmony (taehwa).

In the Four–Seven Debate with Ki Daesung, Toegye ( Yi Hwang, 1501 – 70 ), while being still dualistic, broke away from Chu Hsi by espousing the reciprocal emanation (hobal) of i and ki: with the Four, ki follows i when i becomes emanant; with the Seven, when ki becomes emanant, i ‘rides’ ki. Though he was critical of Toegye's idea that ki follows i as being dualistic, Yulgok (Yi I, 1536 – 84 ) nevertheless embraced his notion that i ‘rides’ ki: only ki is emanant and i moves its emanation; i and ki are ‘neither two things nor one thing’, as evidenced by ‘wondrous fusion’ (myohap). For Yulgok, original nature (i) and physical nature (ki) coalesce into one human nature. Toegye and Yulgok, whose thoughts culminated in an irenic fusionism, constituted the crowning phase of East Asian neo-Confucianism by exhibiting dialectical dexterity in articulating the concepts of i and ki, left unclarified by the Chinese.

Toegye also developed the neo-Confucianist concept of single-mindedness (kyung), which was a manifestation of his unequivocal humanism, as shown by his total rejection of the Mandate of Heaven (chunmyung), which still had a hold on the Chinese, including Chu Hsi. Toegye's kyung synthesized the primeval Korean sense of supreme-efforts-come-earnest-devotion (chisung) with the Confucianist notion of holding fast to mind (jik-yung); he advocated self-efforts for creating a meaningful life. In particular, his concept of single-mindedness had a lasting influence on the Japanese neo-Confucianists of the Tokugawa period.

Those who were sent to be educated in Japan, returned with limited knowledge of Western philosophy as a whole, although the German educational influence in Japan led to the beginning of interest in German idealists in Korea through indirect knowledge, with the exception of Marx, Hegel, and the dialecticians.

The strong influence of low church Christianity, through missionary schools, led to practical American YMCA-style philosophy entering into Korea from the 1890s onwards. The discussion of Korean Christianity and Korean Christian philosophy is complicated with many divisions, and discussed in articles elsewhere.

Philosophy in Korea was divided, by Western school, according to a kind of pragmatic mix of varied progressive libertarian beliefs in the south with highly variable changes from rigid authoritianism to softer and easier more pragmatic approaches from the 1990s onwards.

In the republican period, post-1945, Marxism–Leninism in the north was built on the Confucian yangban scholar-warriors of earlier times, if perhaps taken to absolutist extremes.

The main influence in North Korea has been since 1996, the notion of "The Red Banner Spirit". This system of belief encourages the North Korean people to build a "kangsong taeguk", a fortress state, based on self-reliance and absolute loyalty to the leader (suryong). This philosophy was created by the "three generals of Mt. Paektu," referring to former North Korean leader Kim Jong-il, his father Kim Il-sung and his natural mother Kim Jong-suk. Again little is known of philosophical publications on this subject; but it appears to have replaced Marxism with a home-grown nationalistic ideology.

These are listed by their most commonly used pen name, followed by their birth name.